TCS' year-on-year growth stood at 10.1%, barely 20 basis points higher than the lows of the December quarter

Tata Consultancy Services Ltd’s (TCS’s) March quarter results had held the promise that the company’s struggles with revenue growth were behind it. In constant currency terms, growth had bounced back to 11.9%, after falling as low as 9.9% in the December quarter. Besides, the company’s commentary suggested that growth was set to be strong in fiscal year 2017, since the troubles it faced in some segments in FY16 had eased.

But sadly for investors, TCS is back to its underperforming ways. Year-on-year growth stood at 10.1%, barely 20 basis points higher than the lows of the December quarter. On a quarter-on-quarter basis, revenue grew by 3.1% in constant currency terms, lower than the 3.5-3.7% growth some analysts were anticipating. A basis point is one-hundredth of a percentage point. 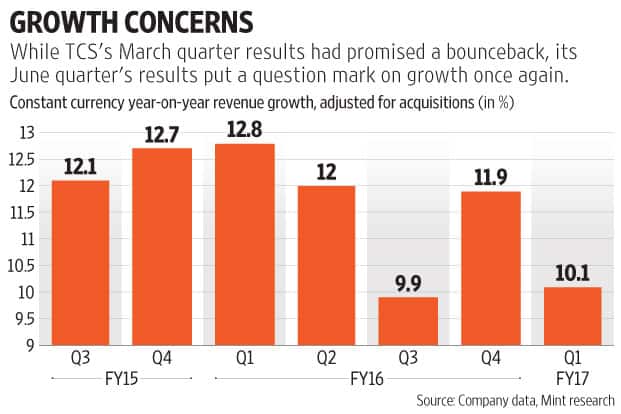 And while the firm has been rather bullish about demand from the banking, financial services and insurance (BFSI) sector, the segment ended up dragging overall growth last quarter. Revenue from the BFSI segment accounts for over 40% of the total, and grew by just 1.7% sequentially last quarter. TCS said in its post-results commentary that although there is nothing negative to report as of now, it is closely watching how financial institutions respond to the Brexit event. It’s likely that the uncertainty related to Brexit could result in delays in decision-making and deferments in discretionary projects.

The biggest positive for the quarter was the company’s ability to limit the decline in operating margin to 100 basis points. Analysts at Kotak Institutional Equities, for instance, had estimated a 145 basis point drop, owing to the twin impact of wage hikes and visa costs. Even so, the company’s post-results commentary suggested that margins may come under pressure in the rest of the year. In earlier statements, TCS had assured analysts that it would operate in a 26-28% margin band. After the June quarter results, it said that this is a statement of intent, causing worry among some analysts. Last quarter, revenue growth lagged volume growth by about 30 basis points, suggesting pressure on pricing. Employee attrition, meanwhile, fell meaningfully, which comes as a relief.

All told, TCS shares can be expected to correct when trading resumes on Friday. The fact that TCS has underperformed in the past year may well limit the downside. However, if Infosys Ltd reports better-than-expected results on Friday morning, more investors may opt for the “Buy Infosys/Sell TCS" trade, in which case the correction may well be severe.