Unless contagion spreads, bonds may reverse gains on supply

Unless contagion spreads, bonds may reverse gains on supply

Mumbai: The Greek debt crisis and easy liquidity have boosted bonds in the past week. The European crisis and the monsoon could be two key factors that determine the direction yields will take, Jayesh Mehta, managing director and country treasurer, Bank of America NA, said in an interview. Edited excerpts: 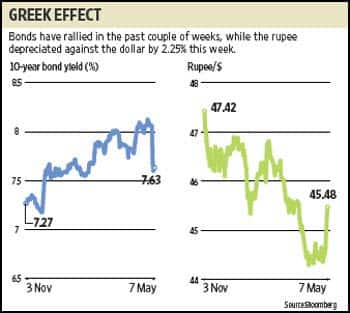 The local debt market has reacted positively with the yields coming down (due to) rising risk aversion. The local currency market has reacted in consonance with its Asian peers with the rupee depreciating against the dollar by almost 2-2.25% in this week. The fiscal deficit in Asia is well under control and thus there is less fear of money flowing out of the Asian economies and rates should remain soft.

If the contagion effect spreads, then India too will be affected and the Reserve Bank of India (RBI) would have little incentive to maintain a hawkish monetary policy stance by tightening rates.

What could potentially destabilize the government’s fiscal deficit projections and the borrowing programme?

On the revenue front, we could face challenges if growth falls, leading to a shortfall in tax collections and disinvestment proceeds. In the current budget forecasts, there is no provision for oil subsidy. The oil deficit is expected to be substantial at current prices.

In case the current crisis spreads, oil prices could move south and hence reduce the impact of this potential oil subsidy on the deficit numbers. Overall, there is a relative risk of missing fiscal deficit targets this year.

What will be RBI’s most preferred tool for managing the government borrowing programme?

Liquidity management will be the most preferred tool. RBI would like to maintain sufficient liquidity in the system to incentivize the market so that the borrowing programme sails along smoothly. RBI is also not expected to be aggressive in hiking rates. Quite likely, RBI will hike rates in steps of 25 basis points each, leaving enough potential carry income for the bond holders. (One basis point is one-hundredth of a percentage point.)

Foreign funds have been huge participants in the local bond market recently. What do you think has triggered this surge and is this interest likely to continue in the long term?

The interest is likely to continue and grow. There are real money funds which are looking for higher limits to invest in the country and the relative stability of the Indian economy is an added attraction, although withholding tax is a deterrent for long-term investors—that is, in 10-15 years’ bracket.

What’s your outlook for bond and rupee for the next three-six months?

Despite the heavy government borrowing programme schedule, bonds have rallied in the past couple of weeks. Unless the contagion effect spreads, bonds could reverse some of these gains in the short term due to continued, strong supply pressures. However, once the supply pressure eases, and if the monsoons are normal, the yields should come down later in the year.