The government’s widely publicized announcement of fixing minimum support prices (MSPs) at 50% over the cost of production of crops has not worked yet, indicates inflation data for October. 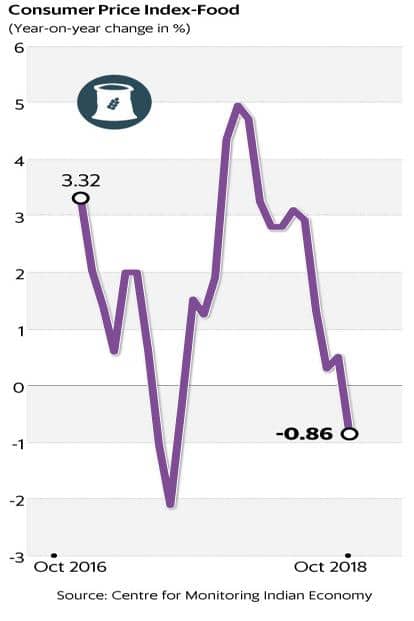 Cast your eyes on the above chart, which shows the year-on-year inflation for food items. For October, we have deflation instead of inflation in food prices. Stories had already appeared that farm produce arriving at mandis last month was being sold well below the MSPs. The deflation in the agricultural sector is a sign of continuing farmer distress.

Commenting on the food inflation data, Soumya Kanti Ghosh, group chief economic adviser at State Bank of India, said in a report: “Such a trend goes against simple economics of MSP driving food inflation and declining trend is showing that there has been very little procurement happening on the ground. This is indeed a matter of serious concern."

The silver lining is that the fear of higher MSPs leading to higher inflation seems to be on the ebb. But it is still early days and we need to see whether there will be an increase in farm prices in November.