Theatres in small cities get facelift; multiplex culture catching on

Theatres in small cities get facelift; multiplex culture catching on

I was shocked when I went to a theatre in Coimbatore (in Tamil Nadu)—it was as swanky as any Mumbai multiplex. The screen was digital so the picture was really clear, the seats were new and there was caramel popcorn in the canteen! There was even organized parking," says Arumugam Panneerselvan, a 22-year-old engineering student from Mumbai.

People such as Panneerselvan will likely continue to be shocked—or surprised—by changes in single-screen theatres in cities such as Coimbatore. Some of these are being converted into multiplexes to tap rising demand in such cities as well as tax incentives provided by the local government—box office takings are exempt from tax for up to five years in some cases. Others are being converted, as the theatre Panneerselvan visited likely was, into swankier versions of their former selves, replete with digital projection systems and high-end sound systems.

According to a study by the local arm of audit and consulting firm PricewaterhouseCoopers, India’s film industry was worth Rs8,450 crore in terms of revenue in 2006, and could grow to Rs17,500 crore by 2011. The study also says that India currently has around 12,000 single-screen theatres and 325 multiplexes, and expects the number of multiplexes to increase by 907 by 2011. Meanwhile, the concept of large single-screen theatres that can accommodate more than 1,000 viewers is also catching on. 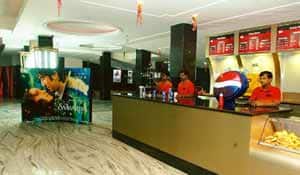 Small is big: E-City’s new theatre, Talkie Town, at Miyapur in Hyderabad. E-City, which spearheads the Zee group’s cinema exhibition business, aims to bring around 1,000 single-screen theatres into the digital fold. Each such screen conversion can cost Rs15-20 lakh.

“Around 80-90% of the movie-going clientele in India goes to the single screens, so we can hardly afford to ignore them. And as most of them are in semi-urban areas, we have to go there," says Rajesh Mishra, chief executive officer of UFO Moviez.

UFO is looking to bring 900 such screens under the digital fold over the next five years while E-City Ventures, which spearheads the Zee group’s cinema exhibition business, is targeting around 1,000 screens.

“India is still an under-exhibited country—for a population of our size we have only around 12,000 single screens and around 300-350 multiplex screens," says TimmyKandhari, national leader, media and entertainment practice, at PricewaterhouseCoopers. “That leaves a large part of the country unserviced. We see a lot of growth in the sector, especially in the small cities," he adds.

Given India’s population of more than one billion, that is almost 83,000 people being serviced by a single screen.

While Kandhari is reluctant to put a number to the opportunity in the sector, AtulGoel, chief executive of E-City, says that while converting a single screen into a digital one can cost Rs15-20 lakh, converting it into a mulitplex could cost up to Rs1.5 crore.

The opportunity is not limited to “screen conversions" (as industry executives term it), says Goel.

“We are also looking at other opportunities like developing retail malls at many of these sites where there is extra land or commercial parking lots wherever possible," he adds.

According to Goel, developing malls is “a limited business opportunity" as not many single-screen theatres have enough land.

Most opportunities for this, he says, are in South India where, typically, most theatre complexes have more than one screen. Goel prescribes an ideal site size of 50,000-60,000 sq. ft for a commercially viable retail operation.

“As incomes rise and the standards of living rise in the smaller cities, spends on entertainment have begun to rise and people are looking for entertainment options," says Ashok Sinha, chairman and managing director of BPCL.

“We already have the land and a certain assured footfalls in terms of our existing petrol stations. We think we can persuade these people spend more time at these destinations if we offer them quality entertainment options," he adds. These theatres will be built at petrol stations on the outskirts of cities, Sinha said.

BPCL plans to roll out two pilot projects by next year to gauge the response to its plans. “The other thing that should keep our theatres in business is that we plan to release the movies on the same day that they are released in the metros," says Sinha.

Usually, movies are released in smaller cities with a time lag of two to three weeks.

“In a place like Ghansoli or Bhiwandi, a 75-seater is a good business option and you can a build a theatre on 2,000-3,000 sq. ft of space. With two new movies running, the chances of losing money on the theatres is minimized," says Laxmichand Shah, who has built two theatres in Bhiwandi and Ghansoli, with two screens each.