OTHERS : Mumbai: Benchmark Indian indices BSE Sensex and NSE’s Nifty 50 recovered early losses led by IT and healthcare stocks as investors digested BJP’s poor performance in assembly elections. Latest trends in Assembly election results showed the Congress leading in Madhya Pradesh, Rajasthan and Chhattisgarh—three states where BJP was in power. Markets initially plunged over 1% in reaction to Reserve Bank of India Governor Urjit Patel’s unexpected resignation late on Monday.“Market continued to trade on a negative bias due to global growth concerns and widening fiscal deficit. The initial set of results was good but as the season progressed companies are struggling to maintain a decent operational efficiency due to rising input costs, interest rates and depreciation in INR. And if the global volatility continues investors will be more focused on haven assets like gold & bonds,” said Vinod Nair, Head of Research, Geojit Financial Services Ltd.In global markets, stocks were mixed, with European shares rallying while U.S. futures and Asian shares slipped. Oil prices were under pressure amid worries over global stock markets and doubts that planned output cuts led by producer club OPEC will be enough to rein in oversupply.. Here are the latest updates from the markets: Bharti Airtel said that General Tax Directorate of Niger has ordered the closure of the offices of Airtel Niger, seeking tax amounts that have been disputed by Airtel Niger. Bharti Airtel shares traded 1.1% down at Rs 291.05 per share.

Where is the wrath of the markets?

The markets seem to have shrugged off the surprise resignation of RBI chief Urjit Patel. Nifty is up while bond yields have also fallen.https://t.co/i9yLGWy7ay The government is likely to make an announcement regarding Urjit Patel’s successor as Reserve Bank of India’s Governor later in the day, Finance Secretary A N Jha said. RBI has been rendered headless following Patel’s unexpected resignation, with immediate effect, on Monday. Speaking to reporters, Jha said, some communication from the government on RBI is expected.

Kridhan Infra Ltd said that Ashok Goyal has resigned as CFO of the company, effective December 11. Shares traded 1.98% up at Rs 46.45 per share.

Dr Reddy’s shares rise on new drug launch in US

Dr Reddy’s Laboratories Ltd said that it has launched Omeprazole delayed-release tablets, 20 mg in the US market. Shares traded 0.76% up at Rs 2,710 per share.

Shares of private banks traded lower after Reserve Bank of India’s governor Urjit Patel resigned on Monday. The Nifty Bank Index was down 1.65%, with HDFC Bank and ICICI Bank losing over 2%. Indian economist Surjit Bhalla resigned from Prime Minister Narendra Modi’s economic advisory council effective December 1, a spokesman in Modi’s office said on Tuesday. News about Bhalla’s resignation comes a day after the Reserve Bank of India’s governor Urjit Patel quit abruptly after a months-long tussle over policy with the government. Modi formed the council late in 2017 to address issues of macroeconomic importance. The spokesman said Bhalla planned to join another organisation. Bhalla was not available for comment. Reuters 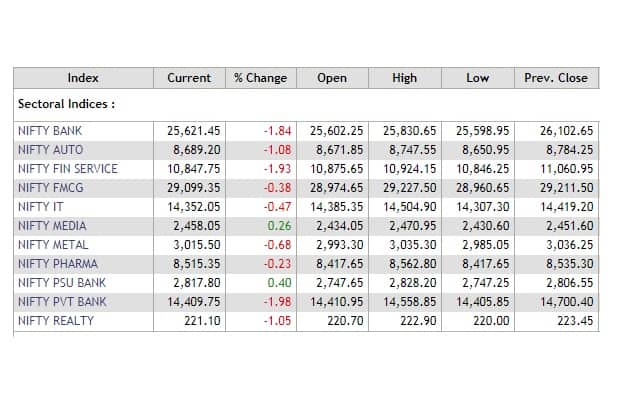 Top gainers and losers on the Sensex Rupee slumps 1.5% against US dollar

The Indian rupee (INR) fell sharply against the US dollar (USD) today after the shock exit of RBI governor Urjit Patel, who announced his resignation on Monday. The rupee was trading at 72.46 against the US dollar, down 1.5%, as compared to yesterday’s close of 71.32. The 10-year government bond yield rose to 7.71%. Read more

Congress ahead in Rajasthan; Close fight in MP, Chhattisgarh “Governments that do not respect central bank independence will sooner or later incur the wrath of financial markets, ignite economic fire, and come to rue the day they undermined an important regulatory institution,” RBI deputy governor Viral Acharya said less than two months ago. Since then, there has been a furious debate about the independence of the central bank. News reports had suggested that RBI governor Urjit Patel will resign in protest against attempts to influence RBI’s policies.That day has come. While Patel has officially said he is quitting because of personal reasons, the acrimony between RBI and the government on policy matters has left little to the imagination.For investors, especially those from foreign shores, interfering with central bank independence is a touchy subject. It’s little wonder the rupee fell by 1.6% in non-deliverable forward (NDF) markets overseas. The three-month NDF rate now predicts the rupee to weaken to as much as 73.20 to a dollar from 71 last week. American Depository Receipts (ADRs) of HDFC Bank Ltd and ICICI Bank Ltd fell 6%, signalling a sharp correction when India’s equity markets resume trading on Tuesday. Read more PineBridge: “Our immediate concern is that if the resignation was influenced by the government’s interference with the central bank’s independence, it would obviously have very damaging consequences for RBI’s credibility,” said Anders Faergemann, a fund manager at PineBridge Investments in London “Policymakers would need to address immediately to avoid a sharp market correction.”FirstRand: “Markets are going to react very negatively to this news,” said Paresh Nayar, Mumbai-based head of currency and money markets at FirstRand. “It’s not a good outcome at all.”BNP Paribas Asset: “There is a risk that the rates rally is now behind us, especially if oil prices are rebounding,” says Jean-Charles Sambor, deputy head, emerging-market debt “The medium-term outlook will be driven by how credible the replacement is and the relationship with the finance ministry.”Macquarie Capital Securities: Resignation will be taken negatively by markets as they would have expected continuity till the general elections, says Suresh Ganapathy, head of financial sector research “The government will also have to appoint a new RBI Governor, which will not be easy. Continuity of policy, which is important for a system perspective, will be in a limbo.”NSP Treasury Risk Management: Stock and currency markets will be extremely volatile Tuesday, tracking the global markets which are already correcting lower, says Param Sarma, chief executive at Mumbai-based forex broker. “There’s a chance of INR testing 72.80 before a recovery can set it; the Sensex may see a 1,000-point slide” from Monday’s close of 34,959.72 “In the circumstances, intervention from the RBI cannot be expected and the rupee’s depreciation may be sharper if state election results, by any chance, indicate an anti-Modi view.”Independent banking analyst ( Hemindra Hazari): “It signifies a lot of turbulence, a lot of pressure on him, so he probably resigned as a protest. Or he has been made to resign, one of the two.” “Immediately there will be a negative impact, but everything will come back to normal eventually.”Acquarius Investment Advisors: The development could bring some downside for the rupee, but the currency won’t dive because of this, says A.S. Thiyaga Rajan, a senior managing director. Bloomberg Gold prices held steady early on Tuesday, supported by hopes that the U.S. Federal Reserve could pause its rate hike cycle sooner than previously thought, but a stronger dollar amid Brexit worries weighed on the precious metal. Spot gold was steady at $1,244.71 per ounce, as of 0114 GMT. US gold futures were little changed at $1,250.1 per ounce.Oil prices remained on shaky ground on Tuesday after sliding by 3 percent the previous day, pressured by weakness in global stock markets and doubts that planned supply cuts led by producer club OPEC will be enough to rein in oversupply. US West Texas Intermediate (WTI) crude futures were at $51 per barrel at 0028 GMT, unchanged from their last close. International Brent crude oil futures had yet to trade.Metals: London base metals recouped some of Monday’s losses in early trade on Tuesday, lifted by a weakening dollar, although poor economic data from top metals consumer China and ongoing Sino-U.S. trade friction capped gains at around half a percent. Three-month LME copper rose by 0.5% to $6,122 a tonne, after shedding 0.9% in the previous session. The most-traded February copper contract in Shanghai was flat at 49,070 yuan ($7,139.22) a tonne. LME aluminium, zinc and lead all added around 0.5%. Reuters