Analysts believe that if credit growth to the real estate sector has slackened due to RERA, GST has increased the final tax outflow

The BSE Realty Index that raced past benchmark indices since January 2017 lost steam in the last fortnight. Results for the September quarter were a mixed bag, even as sales performance across listed entities belied expectations of a revival in home sales.

No doubt, the invalidation of high-value banknotes and the Real Estate (Regulation and Development) Act, 2016, or RERA, bode well for the sector that was a haven for unaccounted money and lacked transparency with developers getting away with defaults.

But while RERA lifted sentiment on the Street, the euphoria came too early.

The implementation of RERA increased compliance costs and took time as the states had to notify the rules.

So, the market leader in the listed universe, DLF Ltd, had no sales bookings of homes between May and October, opening sales only in November after RERA compliance. Hence, after a weak June quarter, September quarter net sales contracted by 23% year-on-year (y-o-y). Net profit dived by 93%. 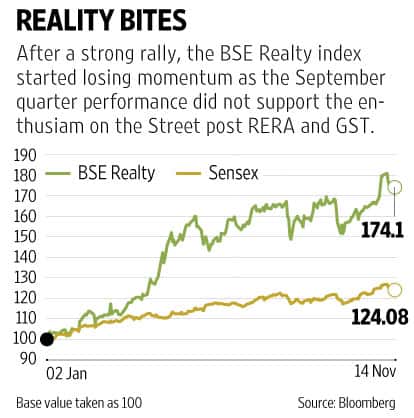 Others, too, had disappointing stories to tell. Brigade Enterprises Ltd’s residential sales were down y-o-y. However, some firms such as Sobha Developers Ltd fell in line with regulations quickly and sales improved, shoring up profitability and profits, too. Phoenix Mills Ltd posted impressive results—it’s the largest owner of malls in the country, and rental income has been growing steadily for over three years.

Meanwhile, analysts believe if credit growth to the sector has slackened due to RERA, the goods and services tax (GST) has increased the final tax outflow in some areas of real estate and construction, in spite of subsuming a host of other taxes. Projects costs, therefore, would be higher.

The ability to pass on this to buyers of property will hinge on the brand equity of developers. For instance, Godrej Properties Ltd may benefit as small developers in Mumbai may want to team up with large professional firms to ensure quicker completion of projects. RERA may in the long run see a shift from the unorganized to organized developers in real estate.

However, given the weak sales and high working capital outlay required to complete projects, debt rose at some realty firms such as DLF. Those with steady sales momentum, like Sobha, saw positive cash flows. Further, as has been the case over the past few quarters, firms with higher exposure to commercial assets and retail malls have stood the test of time and are less hurt by the downturn in residential sales.

The huge run-up in most stocks since January, as mirrored in the 50% rally in the BSE Realty index since April, has capped upsides in most stocks. Performance of firms is yet to catch up with investor enthusiasm. The second half of FY18 portends to be better, given that many firms are RERA compliant and home loan rates, too, are on the decline.