A good bear is hard to find as global stocks rise

A good bear is hard to find as global stocks rise

New York: The US Federal Reserve has driven most stock market bears into hibernation. From UBS AG to Deutsche Bank AG and Citigroup Inc., Wall Street strategists are the most bullish they’ve been since 2000 after the US housing slump erased $5.6 trillion (Rs223 trillion) from the global equity markets and prompted the Fed to cut interest rates. 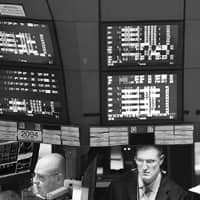 Steady move: Wall Street strategists are the most bullish after the US housing slump erased $5.6 trillion from the global equity markets and prompted the Federal Reserve to cut interest rates.

Wells Capital Management and MFS Investment Management, which together oversee $375 billion in assets, are adding or looking to buy shares of banks, retailers and technology companies on expectations that lower borrowing costs and expanding economies across Europe and Asia will spur profit growth.

“You couldn’t mix a better drink for the stock market," said James Paulsen, who helps oversee $175 billion as chief investment strategist at Wells Capital in Minneapolis, in Minnesota, US.

Investors have been celebrating after the Fed’s surprise half-percentage point rate cut on 18 September sent the Morgan Stanley Capital International (MSCI) World Index of 23 developed markets on its biggest two-day rally since June 2006. They snapped up shares of commodity producers and industrial companies after global stocks fell to their lowest levels in 12 years.

The bears haven’t all retreated. Balestra Capital Ltd’s Jim Melcher and the Leuthold Group Llc. said the bulls are ignoring the reason for the central bank’s rate cut—concern that the world’s largest economy is heading into a tailspin.

Eye of the storm

Policymakers “realize that there’s a real economic threat of a recession if we’re not already in one and there’s a brewing financial crisis," said Melcher, whose $260 million Balestra Capital Partners LP hedge fund in New York has returned 124% this year with bets against financial shares and bonds backed by subprime mortgages.

The rebound in prices “should be viewed as the eye of the hurricane," Steven Leuthold, whose $1.72 billion Leuthold Core Investment Fund has beaten 97% of like funds this year, wrote in the September issue of the firm’s monthly research report. The Leuthold Group, also headquartered in Minneapolis, is concerned the economy will contract next year and cut its equity allocation to 30% from 50% on 17 July—two days before the Standard & Poor’s 500 Index reached a record.

Trading in treasuries shows bond investors expect the Fed will lower rates again before the year-end as the economy comes to a standstill. The yield on treasury two-year notes is almost three-quarters of a point below the designated 4.75% funds rate. In the three previous occasions during the past 20 years when that has happened, policy makers have cut borrowing costs.

“The US economy needs to grow at 2.5-3% or else it stalls," said Bill Gross, manager of the $104.4 billion Pimco Total Return Fund, the world’s biggest bond fund. “Historically, every time we get close to stall speed, the Fed lowers short rates."

He said the funds rate will drop to at least 3.75% as housing causes the economy’s growth rate to slow to between 1% and 2% from 4% in the second quarter.

While recession concerns helped push the float-adjusted MSCI World Index’s price- earnings down to 15.99 last month—the lowest since at least 1995—the Fed’s decision to lower the benchmark lending rate to 4.75% persuaded more investors that the economy won’t start contracting.

The rally has left the S&P 500 within 5% of strategists’ average year-end forecasts of 1,595, the most bullish since December 2000, data compiled by Bloomberg showed.

“If you’ve been an equity investor and gone away for the month of August and not read the paper, you’d wonder what all the fuss was about," said Alan Brown, who oversees $276 billion as head of investments at Schroders Plc. in London.

Brown said the firm favours adding to stocks instead of government bonds and expects the S&P 500 will reach 1,600 by year-end.

None of the Wall Street strategists tracked by Bloomberg cut their 2007 S&P 500 forecasts through the sell-off, even as credit costs between banks surged to the highest in six years and subprime mortgage defaults deepened the worst US housing slump in 16 years.

They have become more optimistic during the year, bringing the average estimate up from 1,550 in January.

The two most bullish firms, St Louis-based AG Edwards & Sons Inc. and Frankfurt-based Deutsche Bank AG, on 17 July raised their year-end forecasts for the S&P 500 to 1,650 and 1,610—three days before the index began its 9.4% plummet from a record.

Six forecasters, including David Bianco of UBS and New York-based Citi Investment Research’s Tobias Levkovich, expect the index to end the year at 1,600.

Strategists such as Bianco of Zurich-based UBS said stronger economic growth outside the US will mitigate any slowdown in the US and boost earnings at the biggest companies with businesses that span the globe.

Housing crisis is not all

“Housing just doesn’t matter for the S&P," said Bianco, the New York-based strategist for UBS. “End of story. The concern about the spillover and what it means for energy companies, tech companies, industrial companies" is overblown because they benefit from global growth.

Cisco received 47% of its revenue from abroad in the year ended in July 2006.

ConocoPhillips last year got 30% of its sales outside the US, while GE got 46%. The Washington, DC-based World Bank this month raised its forecast for China’s 2007 economic growth to 11.3%, from a May estimate of 10.4%.

China grew 11.9% from a year earlier in the second quarter—the fastest pace since 1994.

China, India and Russia together will account for half of global growth this year, according to the International Monetary Fund (IMF).

The Washington, DC-based IMF in July raised its 2007 global growth forecast to 5.2% from an April estimate of 4.9% because Europe, Japan and emerging market economies were proving stronger than expected, compensating for a weaker US. James Swanson of MFS Investment is also looking to purchase shares of the largest technology companies, along with regional banks.

Now is the time to buy equities even though cheaper credit may exacerbate the risk of higher inflation in three to four years," he said.

“I am concerned about it, but what the heck," Swanson, who helps oversee about $200 billion as chief investment strategist at Boston-based MFS, said from Truro, Massachusetts. “It’s four years down the road."