Earnings estimates for the current fiscal year for BSE companies have fallen 2.9% since 8 November when the note ban was announced

Mumbai: Corporate earnings that were poised for a consumption-fuelled take-off on the back of a good monsoon and sharp wage hikes have been brought back to ground by the sudden withdrawal of high-value currency notes as the effects of a severe cash crunch ripple through the system.

Earnings estimates for the current fiscal year for Sensex companies have fallen 2.9% since 8 November, Bloomberg data showed, and more such slippages may be on the way. Analysts now predict few hopes of an earnings recovery this fiscal year and even at the start of the next one.

Last week, Sensex earnings per share (EPS) estimates for fiscal 2017 slipped to Rs1,460.66 last week, the lowest this fiscal year. This is down from Rs1,506.63 on 8 November, when Prime Minister Narendra made the shock announcement in a live TV address. It is also down 3.6% from Rs1,517.53 on 12 October, when the September quarter earnings kicked off with IndusInd Bank Ltd. According to Bloomberg estimates, it had hit a high of Rs1,659.21 on 4 May, when hopes of a good monsoon after two years of drought had lifted sentiment. 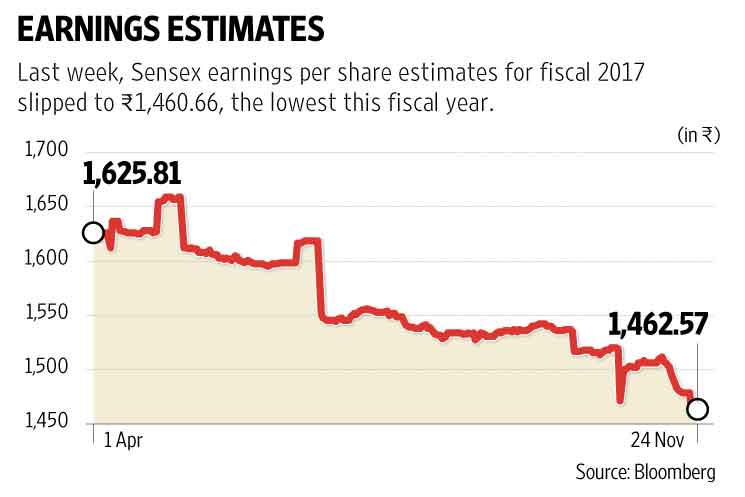 “In the near term, discretionary spending and sectors reliant on the cash economy will see a sharply negative impact," a Deutsche Bank report said on 19 November, adding for the consumer goods sector, it had cut earnings estimates and target prices by 1-24%.  “We may even see the autumn harvest and the winter crop sowing to be impacted, which may lead to a slower-than anticipated growth in agricultural production, which could impact the macro economy over the next two quarters, before recovering in 1QFY18," Deutsche Bank analysts added.

The scrapping of Rs1,000 and Rs500 notes, an attempt to curb black money, counterfeiting and terror finance, has led to a cash deficit as banks struggle to replace the demonetized notes. The move has dashed hopes of consumption jump in Asia’s third-largest economy, which was looking up with a good monsoon and implementation of the Seventh Pay Commission’s recommendations. Also, consumption that would have been fuelled by black money will come to a halt as well.

Consumption-led firms are the first to feel the heat as consumers scramble for cash, impacting demand for consumer packaged goods, durables and discretionary items. Real estate companies, which were already in a rough patch, will feel the pain as prices correct. There have been several cuts to gross domestic product estimates as well.

“Earnings estimates will be getting revised downwards, in view of the disruption because of demonetisation," said R. Sreesankar, co-head of institutional equities at Prabhudas Lilladher Pvt. Ltd. Sreesankar sees a 5-8% cut on the brokerage firm’s net profit estimates for 2016-17 on its earnings universe, and expects consumer-centric sectors to fare worse.

“We had a good monsoon and a good kharif production, and people are also expecting good rabi production. So, rabi sowing needs cash. That has been a bit of a problem in some areas," Sreesankar said. “My view is the biggest impact will be in rural area, and some of the FMCG companies will be the first ones to feel the impact," he added.

“Earnings growth for non-finance companies could actually see up to a 20% decline in their net profits over the next 6-12 months," said Dhananjay Sinha, head of research at Emkay Global Financial Services Ltd. “While topline growth could at best be flat, margins could see severe stress too."

The rupee hit a record low of 68.86 against the US dollar on Thursday, before recovering later, as global funds sold emerging market assets on rising expectations of a US interest rate hike.