OTHERS : Mumbai: Indian benchmark indices BSE Sensex and NSE’s Nifty 50 advanced 1.8% on Wednesday after the government appointed Shaktikanta Das as the RBI governor. Shares of bank and NBFCs surged over hopes that change of guards at the Reserve Bank of India could lead to easing of certain regulations for the banking industry. The rally in benchmark indices was also boosted by gains in realty, auto and metal stocks. The BSE Sensex closed 629.06 points, or 1.79%, up at 35,779.07 and the Nifty 50 ended 188.45 points, or 1.79%, higher at 10,737.60.The appointment of the new RBI governor has raised expectations of a sooner rather than later start to monetary policy easing to support economic growth, economists said. “We think his appointment has equally (if not more) important implications for monetary policy itself. We expect the new MPC to have more dovish leanings and think a window for a rate cut has opened in H1-2019”, Priyanka Kishore, Head of India and Southeast Asia economics at Oxford Economics, wrote in a note.Outperforming the benchmark Sensex, the BSE MidCap and SmallCap indices rose around 2.5%. All the sectoral indices posted gains, with realty rising most at 4.07% followed by auto, which was up 3.58%. Telecom, metal, basic materials, consumer discretionary goods, finance, industrials, utilities and capital goods rose between 2.05% and 2.6%.Hero MotoCorp, Bharti Airtel, Yes Bank, Indiabulls Housing Finance, Tata Steel, UPL and Adani Ports were among the top gainers on the key indices. On the other side, Dr. Reddy’s Labs, Bharti Infratel, HPCL and Titan were only losers on the 50-share Nifty.In global markets, equity benchmarks rose in Japan, Hong Kong and South Korea, and the Aussie ticked higher following positive signs on the outlook for U.S.-China trade talks. Oil bounced after industry data showed a surprisingly large draw on stockpiles and amid talk a recent OPEC-led supply cut could support prices in 2019. Here are the highlights from the markets.

The BSE Sensex closed 629.06 points, or 1.79%, up at 35,779.07 and the Nifty 50 ended 188.45 points, or 1.79%, higher at 10,737.60.“Market rallied and reclaimed the 10,700 mark as swift reaction from government with the appointment of new RBI governor supported the sentiment. Bank nifty outperformed with an expectation of ease in liquidity and relaxation in PCA framework,” said Vinod Nair, Head of Research, Geojit Financial Services Ltd. 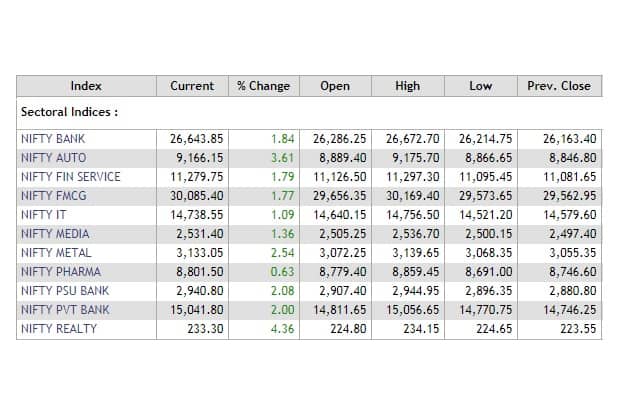 “We think his appointment has equally (if not more) important implications for monetary policy itself. We expect the new MPC to have more dovish leanings and think a window for a rate cut has opened in H1-2019,” Priyanka Kishore, Head of India and Southeast Asia economics at Oxford Economics, wrote in a note.

The 10-year government bond yield fell as much as 11 basis points to hit a fresh eight-month low on Wednesday after the government appointed Shaktikanta Das as a new RBI governor, who is expected to have more dovish views. At 2.44pm, the 10-year bond yield fell to 7.422% from its previous close of 7.528%.

Ambuja Cements said its board has approved an additional annual clinker capacity of 1.4 million tonnes, additional cement grinding capacity of 1.8 million tonnes and Captive Power Plan and Waste Heat Recovery System at Marwar Mundwa at an additional estimated cost of Rs 960 crores. The company further said its MD and CEO Ajay Kapur is leaving to pursue opportunities outside the cement industry. Shares traded 1.69% up at Rs 216 per share.

Yes Bank board will meet on 13 December to consider, among other things, the CEO search panel's recommendation to appoint a successor to MD and CEO Rana Kapoorhttps://t.co/415RCln1tN

Shares of special steel and wire rope maker Usha Martin Ltd jumped as much as 10.2% to Rs 39.95, their highest since Dec 4 after the Competition Commission of India on Tuesday approved acquisition of the company’s steel division by Tata Sponge Iron Ltd. Tata Sponge Iron’s shares rose as much as 1.8%, while Tata Steel added 3.8%. Usha Martin’s stock posts biggest intraday pct gain since Nov 5. More than 835,600 shares change hands, compared with 30-day avg volume of around 2.2 mln. Usha Martin’s stock had gained 46.2 pct this year as of last close, while Tata Sponge had shed 24.4 pct in the same period. Reuters

ACC shares rose 2.65% to Rs 1470.20 per share after the company said it has approved an expansion plan that would cost approximately Rs 3000 crore. The plan included setting up a greenfield integrated cement plant at Ametha in Madhya Pradesh along with expansion of the existing grinding unit in Tikaria, Uttar Pradesh and a third grinding unit also in Uttar Pradesh. The company will also set up of 1.1 MTPA cement grinding facility at the existing location at Sindri, Jharkhand.

“The market perhaps believes that the departure of the RBI governor could lead to relaxation in certain regulations for the banking sector (higher liquidity, relaxation of PCA framework, dilution of promoter ownership rules) and a more liberal monetary policy,” said Kotak Institutional Equities in a note to its investors.

BJP lost power in three key states on Tuesday, dealing Prime Minister Narendra Modi his biggest defeat since he took office in 2014 and boosting the opposition ahead of national polls next year. A key worry for markets would be if the domestic equity investors that started to invest in markets along with Modi’s win in May 2014 start to reduce new investments, said CLSA.State elections results will likely increase fears of an unstable govt among retail investors and this could impact market inflows, added the brokerage. Slowdown in flows could impact market multiples. Modi is still the favourite to win 2019, but Congress’ wins increase the probability of a united opposition, according to CLSA.Citing previous election results, Motital Oswal Research says there is no direct co-relation between outcome of the “semi-final” state polls and Lok Sabha polls. The brokerage expects govt to turn incrementally more populist in its remaining terms and provide relief/handouts to different segments of the electorate. It also expects focus to revert to fundamentals, and sees volatility to be elevated going into CY19. Reuters

HCL Tech shares up over 1%

The firm's argument is that the acquisition will give a leg-up to its products and platforms businesshttps://t.co/1q2VLC546v

Dr Reddy’s Labs falls over 1% on US court ruling

Shares of Dr Reddy’s Labs fell as much as 1.58% to Rs 2666.15 after a US court ruled that Dr. Reddy’s Labs will have to wait a little longer before it can start selling a generic version of Indivior Plc’s Suboxone Film opioid addiction treatment, Bloomberg reported. The sales ban will remain in force to give Indivior time to challenge a Nov. 20 appeals court decision it lost.

Rupee extends losses against US dollar

The Indian rupee extended its losses on Wednesday against the US dollar after ruling Bhartiya Janata Party (BJP) suffered a setback in the three state elections, and also after the government announced a former bureaucrat as a central bank chief. At 9.15am, the rupee was trading at 72.10 a dollar, down 0.33% from its Tuesday’s close of 71.87. The currency opened at 72.02 a dollar. The 10-year government bond yield stood at 7.475% from its previous close of 7.528%.

Oil prices climbed by more than 1% on Wednesday, lifted by expectations that an OPEC-led supply cut announced last week for 2019 would stabilise markets as well as hopes that long-running Sino-American trade tensions could ease. International Brent crude oil futures Were at $60.89 per barrel at 0212 GMT, up 69 cents, or 1.15% from their last close. U.S. West Texas Intermediate (WTI) crude futures were at $52.25 per barrel, up 60 cents, or 1.2%.Gold prices were steady early on Wednesday, supported by expectations of fewer rate hikes by the U.S. Federal Reserve next year, while palladium traded at a premium to gold. Spot gold inched up 0.1% to $1,244.40 per ounce, as of 0115 GMT. U.S. gold futures rose 0.2% to $1,249.9 per ounce.Metals: Most base metals edged higher on Wednesday, supported by progress in trade talks between the United States and China. Three-month copper on the London Metal Exchange edged up 0.1% to $6,175 a tonne by 0132 GMT, while the Shanghai copper contract rose 0.6% to 49,280 yuan ($7,169.77) a tonne. All other London metals rose slightly, while most Shanghai metals also gained. Shanghai aluminium bucked the trend with a fall of 0.3% to 13,620 yuan a tonne. Reuters

Asian equities climbed with U.S. and European stock futures and the offshore yuan following positive signs on the outlook for U.S.-China trade talks. Equity benchmarks rose in Japan, Hong Kong and South Korea, and the Aussie ticked higher. News that Canada granted bail to Huawei CFO helped bolster sentiment as trading began in Asia. President Donald Trump added to the positive mood, telling Reuters he’d consider intervening in the case if it helped get a China deal, and would meet with President Xi Jinping if needed to advance trade negotiations.The MSCI Asia Pacific Index was up 1.3% as of 11:52 a.m. in Tokyo. Japan’s Topix index added 2%. Hong Kong’s Hang Seng rose 1.4%. Shanghai Composite gained 0.2%. Australia’s S&P/ASX 200 Index advanced 0.7%. Futures on the S&P 500 rose 0.4%. The S&P 500 was little changed at the close of trading in New York. Futures on the Euro Stoxx 50 added 0.3%. Bloomberg