Although demonetisation seemed to put a dampener on India’s cash economy, data shows that it might not have been a lasting impact. On 8 November 2016, the government announced the withdrawal of ₹ 1,000 and ₹ 500 notes to formalise the economy, root out black money, increase the tax base and reduce cash transactions. The Reserve Bank of India (RBI) annual report released in August 2018 confirmed that 99.3% of demonetised notes were returned to the banking system.

Also, according to data collated by Tata Communications Payment Solutions Ltd (TCPSL), it appears that demonetisation may have met with little success in pushing the country to go digital. The TCPSL report said that India witnessed significant growth in the volume of cash transactions even after demonetisation. The currency in circulation has grown from ₹ 17.97 crore before demonetisation to ₹ 19.57 crore at present.

“Cash continues to be in strong demand even post demonetisation. Today, there are more than a dozen ways to pay digitally yet people find reaching for cash in their wallet the easiest way to pay," said Sanjeev Patel, chief executive officer, TCPSL. 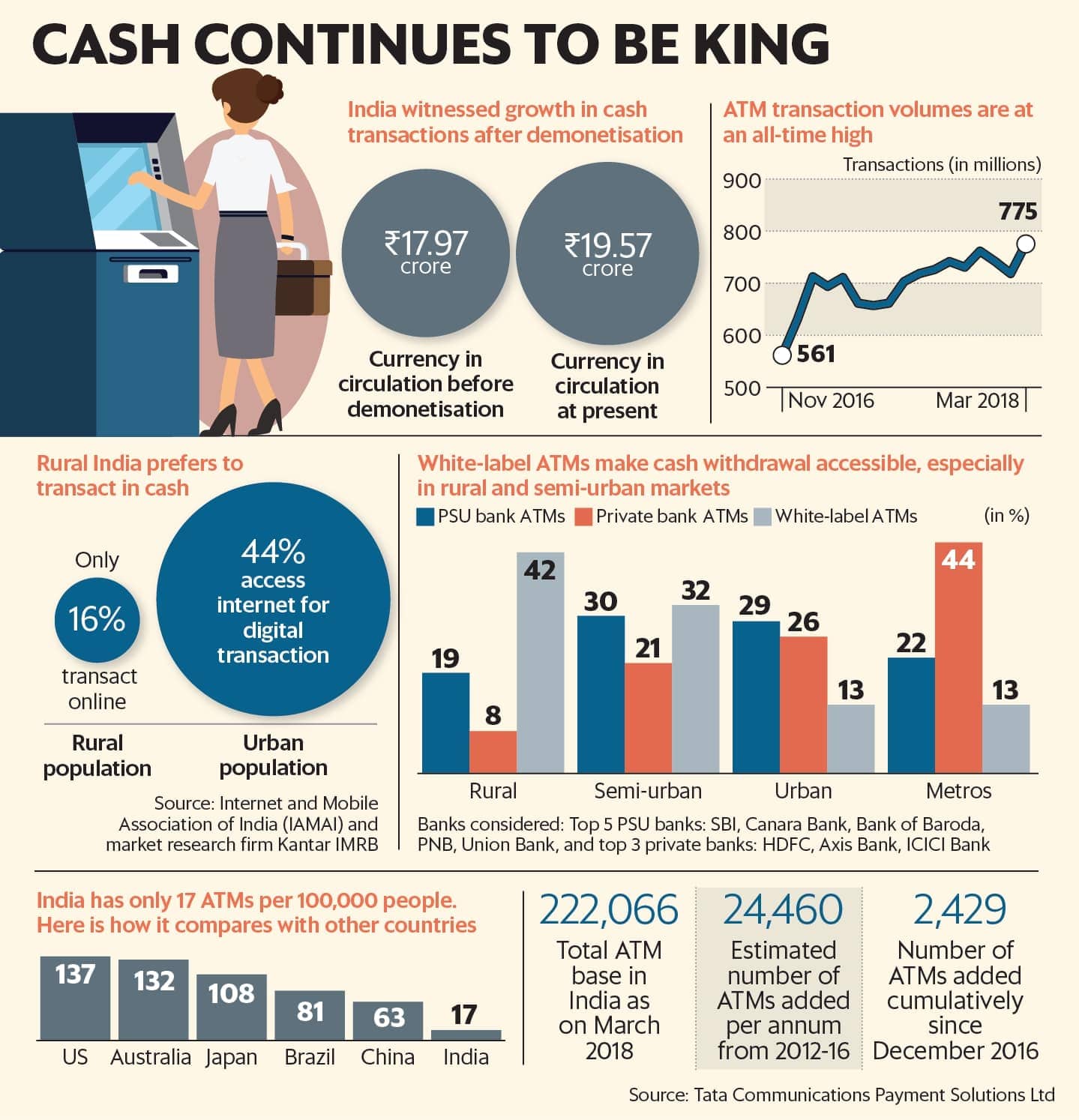 This demand for cash has resulted in rise in ATM transaction volumes. However, the ATM system in India is far from adequate at the moment. This calls for a revamp, but there are several hurdles in the way, including slow ATM roll-out by banks due to feasibility challenges like high interchange rate and erratic cash flow at existing ATMs. The cost of operating ATMs because of compliance requirements is also a deterrent, said the report.

As of March 2018, the total number of ATMs in India was 222,066. This translates into only 17 ATMs per 100,000 people. This is extremely low compared to developed markets like the US and Australia.

The report goes on to study the distribution of ATMs by PSU banks and private banks, as well as white-label ATMs (WLAs) which are run by non-bank entities, and regulated by RBI, showing that WLAs drive cash accessibility especially in rural and semi-urban areas. Taking five PSU banks (SBI, Canara Bank, Bank of Baroda, Punjab National Bank and Union Bank) and three major private banks (HDFC, Axis Bank and ICICI Bank) into account, the report states that only 19% of ATMs in rural areas are by PSU banks and 8% by private banks, whereas 42% of them are WLAs. In semi-urban areas, 32% of ATMs are white label.

Another factor that needs to be taken into consideration is the seasonality of cash demand. There is a spike in ATM transactions during festivals, which has to be factored into the cash supply.

There is still a clear demand for cash in India, especially in rural areas. To cater to this demand ATM rollout needs to be stepped up and uninterrupted cash flow.