Home >Market >Mark-to-market >Nifty in March 2015 and now: What has changed?

Nifty's one-year forward valuation now stands at 20.8 times, about 8% higher compared to March 2015. So unless earnings growth follows, investors are likely to question rise in valuations

The National Stock Exchange’s Nifty 50 index expectedly closed at a new all-time high on Tuesday, with investors cheering the Bharatiya Janata Party’s (BJP) landslide victory in the Uttar Pradesh elections. The last time the Nifty was at similar levels was in March 2015, and much has changed since.

For starters, the one-year forward valuation of the index now stands at 20.8 times, about 8% higher compared to March 2015. As pointed out in this column, unless earnings growth follows, investors are likely to question the rise in valuations. (Read more) As the chart above shows, stocks of oil and gas companies, banks, auto manufacturers, and consumer goods firms have gained at the expense of companies in the IT services, pharmaceuticals, capital goods and telecom sectors. Broadly speaking, sectors and companies that ride on the domestic economy have done well, while those who have large global exposure have underperformed.

Among the biggest gainers, in terms of weight, in the Nifty index was Reliance Industries Ltd, which has risen sharply in recent weeks thanks to excitement about its telecom venture turning profitable sooner than expected. Not surprisingly, the market capitalization of other telecom companies has fallen on a cumulative basis in the past two years. The two other large gainers were HDFC Bank Ltd and Maruti Suzuki India Ltd. 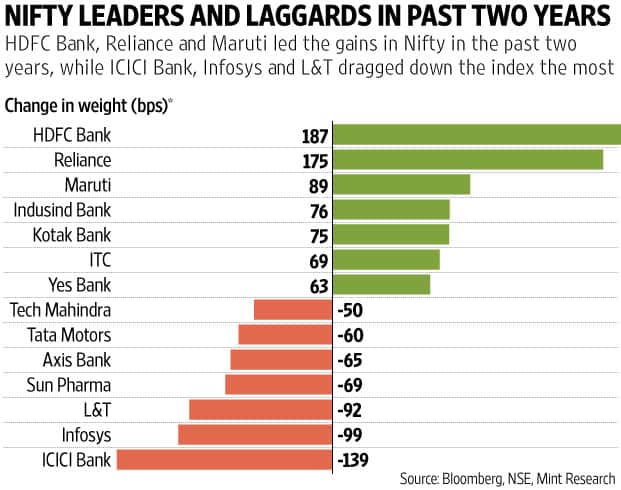