How to buy a used car with no regrets

The market for used cars is growing faster than that for new cars. Here are a few dos and don'ts to stay safe in it

Buying a car is an important decision, because you wouldn’t buy a car every year and would like to use it for at least a few years.

Many people prefer buying their cars on a festival. Carmakers respond to this demand with festive season discounts and freebies. The 2015 season saw over a dozen launches, which included completely new products as well as face-lifts. Data for the past couple of years shows that festive seasons contribute to about a third of the annual passenger vehicle sales.

In the current financial year, festival celebrations will coincide with arrear payouts of the 7th Central Pay Commission for central government employees. A Kotak Institutional Equities analysis dated 30 June expected a 5% incremental demand for passenger vehicles, assuming that 10% of the total salary increase due to the pay commission is spent on purchase of automobiles.

Many first-time buyers prefer to purchase pre-owned vehicles. According to a report on India’s used car market released earlier this month by IndianBlueBook, a pricing guide for new and used cars, the pre-owned car market in India stands at 3.3 million units a year, which is 20% bigger than the new car market. More than half the times, a family’s first car comes from this market. A study by Deloitte, Driving through the urban used-car market, says 73% pre-owned cars buyers are first-time car buyers.

Buying the right used car can be more difficult than buying a new car. We take a look at some of the important aspects that buyers and sellers of pre-owned cars should be mindful of.

“A pre-owned vehicle, in most parts of the world, satisfies one of the most important family aspirations—ownership of the first car. We see India evolving similarly," said Nagendra Palle, chief executive officer, Mahindra First Choice Wheels Ltd, a multi-brand platform to buy and sell used cars.

Though affordability is a big reason, it may not be the only one. “Many people go to pre-owned cars because these are value for money. You can get a good vehicle at a relatively low price," said Umang Kumar, president, CarDekho.com, and chief executive officer and co-founder of Gaadi.com.

For instance, 5-year-old base variants of Maruti Swift and Hyundai i10, with less than 60,000 km on the road, can be bought for around 3 lakh, according to CarDekho.com’s price index. These small cars cost almost half as much the as new ones. The price difference between used and new cars can be more attractive for bigger cars: a Volkswagen Vento can be had for 35% of the price of a new one. Be sure of your reasons for wanting a used car. You need to research the car carefully before buying. Also, don’t be swayed by the first easily available option.

An advantage of buying a used car is that these days many of them are fairly new. Earlier, people used cars for at least 10-12 years. This time period has now come down to around 5-6 years, said Abdul Majeed, partner and national auto practice leader at PricewaterhouseCoopers. This means that you can buy an ‘as good as new’ car at a much lower price and use it for longer.

Customers of used cars include buyers of a second or back-up car too. Demand for these shot up in Delhi when the ‘Odd-Even’ scheme was in force. The National Capital Region (NCR) saw a surge in demand for second-hand diesel vehicles after the Supreme Court banned registration of new diesel cars—over 2000cc engines capacity—in the NCR, found a survey by Cardekho.com.

The survey also revealed that while the ban dented the demand for top automobile brands; in the affected used car segments, such as big SUVs, the enquiries for vehicles increased by 17%. 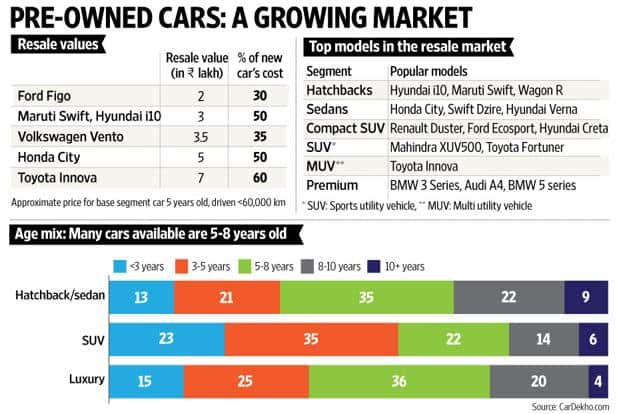 Buyer-seller trust deficit remains a major challenge in the pre-owned car market, which has relatively low levels of consumer protection. “Great strides have to be made to enable good buyer and seller experiences. The industry is getting more organised and also being enabled with technology," Palle said.

Online classifieds are playing a major role in consumers’ decision making. “This has become established over the past few years that people will go online first to find out the right price at which they can buy or sell," said Kumar. “We have developed a pricing index which is also used by banks. As the data will improve over time, so will the pricing experience," he added.

Most people do their research online, and the transaction happens offline. Apart from checking the pricing online, you also need to check with the dealers.

Compared to sellers, the buyers need to take some extra steps to get good deals. Make sure the vehicle is certified and have a warranty or extended warranty. When buying pre-owned cars from manufacturer-backed dealers and many of the auto portals, you can buy 6-month or 1-year warranties. For instance, at Mahindra First Choice, the pre-owned car business arm of Mahindra & Mahindra Ltd, you can buy a warranty for up to 7-year-old cars, covering all electrical and mechanical components. Buying from an organised entity can make it easier to get bank financing as they certify the cars on metrics such as age and usage, have systems to verify details from the transport departments, and they have tie-ups with financing agencies.

If you are choosing cars of less popular brands, ensure that maintenance services and spares are easily available near you. If you are upgrading from a two-wheeler to a car, or from a small car to a bigger one, do remember that the overall cost of ownership will also be higher.

For sellers the most important aspect, other than selling price, is to ensure proper transfer of documents. “If I am a seller, I will want to make sure that the ownership of the car gets transferred out of my name because if something bad happens with that car, and if the insurance is not transferred, for example, I will end up being a party to the problems," said Palle.

Organised entities take care of these issues by giving their customers a proof of sale. In other cases, you must insist on getting a copy of the ownership papers in the new owner’s name.

The pre-owned car market is growing at a pace of 15% a year, found the IndianBlueBook study. The new car market, by comparison, grew at 8% in 2015-16. Majeed said this trend could continue in the coming years. “We have added about 18-20 million cars on our roads in the past 10 years. Combine this with the huge population which has an aspiration to own a car but cannot own a new one," he said. However, while the used car market is growing, the share of organised entities in the market stands at just 19%. On the positive side, this segment is growing at 25% per annum.

The major aspects in the pre-owned car business are discovery of the right product by consumers, trust between a buyer, and a seller, and pricing and financing, said Kumar.

“With the emergence of online classifieds, the problem of discovery has been solved. Other aspects are works-in-progress and things are moving forward," he added. For instance, currently only about 10% of the pre-owned cars are being financed, compared to 70% of the new cars, he said.

So, if you are in the market for a pre-owned car, do your homework on brand, variant, price, loan options, warranty and also where you will buy it from.