Current account deficit widens to 2.4% of GDP as oil offsets gains in remittances

New Delhi: India’s current account deficit (CAD) widened to a four-quarter-high at 2.4% of gross domestic product (GDP) in April-June period on the back of rising crude oil prices, from 1.9% of GDP in the January-March quarter of 2017-18, according to data released by the Reserve Bank of India (RBI). 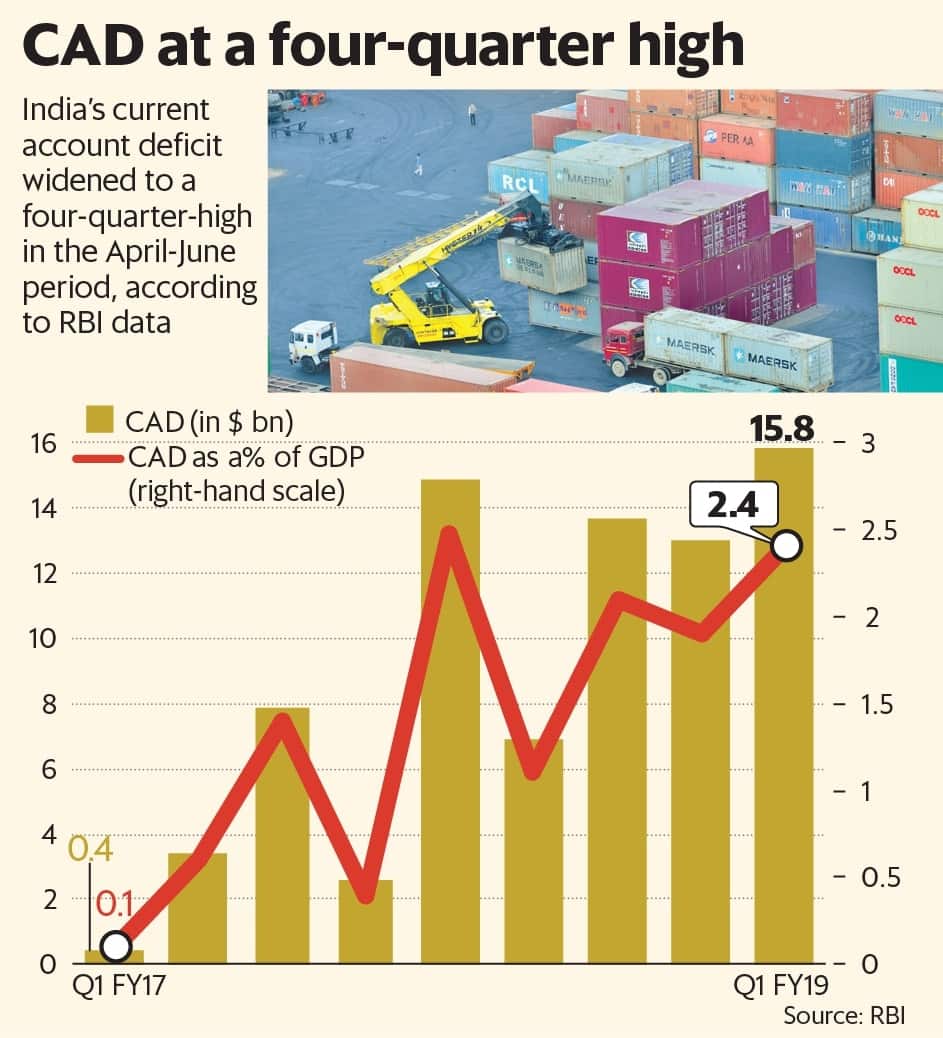 Merchandise trade deficit expanded to $45.7 billion in the June quarter against $41.6 billion in the March quarter as crude oil prices zoomed past $75 per barrel. Net services exports, at $18.7 billion, were lower than in the preceding quarter ($20.2 billion) due to lower realization from IT services.

Workers’ remittances by overseas Indians picked up to $11.5 billion in the June quarter from $10.7 billion in the March quarter, helping check further deterioration in CAD. The subdued remittance flow from Gulf countries last year because of lower oil prices has reversed.

In the financial account, net foreign direct investment at $9.7 billion in Q1 was higher than in the previous quarter ($6.4 billion). However, portfolio investments saw a reversal in fortunes, with a net outflow of $8.1 billion in the June quarter against an inflow of $2.3 billion in the preceding quarter, leading to depletion of foreign exchange reserves. In June, economic affairs secretary Subhash Chandra Garg said that CAD at 2.5% of GDP won’t be a worry as the government has the required instruments to deal with any imbalance created due to foreign fund outflows.

Devendra Kumar Pant, chief economist at India Ratings said foreign exchange reserve depletion and weak capital account flows found their reflection in the depreciation of the rupee. “Elevated oil prices contributed nearly 50% of trade deficit in the June quarter," Pant said. India Ratings expects CAD in FY19 to be 2.6% of GDP and the rupee to average 68.40 to the dollar in the financial year.

Aditi Nayar, principal economist at Icra Ltd, said higher oil prices offset the benefit of contraction in gold imports as well as a healthy rise in remittances. “Unless commodity prices recede appreciably, Icra expects CAD to widen to 2.8% of GDP in FY19, posing a key macroeconomic concern in the ongoing tumult in emerging market currencies," she said.

However, Nayar expects the rupee to weaken further to 72-73 per dollar, given the prevailing risk aversion in global markets.

Nayar believes an anticipated dip in the August 2018 CPI inflation below the Monetary Policy Committee’s medium-term target of 4.0%, juxtaposed by looming inflation risks, robust GDP growth print for Q1 FY2019 and the continued weakening of the rupee, would complicate the next monetary policy decision.