The government’s mid-year analysis report makes the point that public investment is a must, simply because the private corporate sector is over-indebted and unable to undertake additional projects. Banks too, with their huge bad and restructured loans, are in no position to lend to infrastructure. The government’s position that the fiscal consolidation road map may have to be given up to enable government investment is controversial, but they are right when they say the government has failed to expand investment. 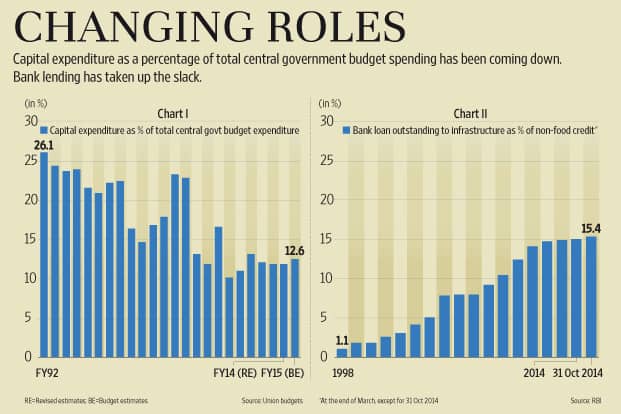 But if funds from the government were no longer so easily available, what took its place? Infrastructure spending continued, but this time the view was that the private sector should be involved in it and the public-private-partnership (PPP) model was seen as a panacea for the resource crunch in the public sector.

Chart 2 shows what happened very starkly—bank lending took up the slack. Infrastructure loans by banks as a proportion of non-food credit went up from a mere 1.1% in 1998 to 15.4% currently. Note that these very long gestation loans are not very suitable for banks and give rise to asset-liability mismatches. Nevertheless, in the absence of alternatives, public sector banks were pressed into service to fund infrastructure. The rest of the story is well known—lack of feedstock, inability to hike power tariffs, rampant crony capitalism and flawed policy all combined to stall these projects. The PPP model fell into disrepute. The wheel has now come full circle and it is the banks that have been left holding the can. But these are public sector banks and in the ultimate analysis, the burden will have to be borne by the taxpayer.