In 2014-15, gross financial savings fell to a mere 9.8% of gross domestic product (GDP), the lowest level in 25 years, points out a note by Nirmal Bang Institutional Equities economist Nikhil Gupta. The math is simple. According to Reserve Bank of India (RBI) data, the gross change in financial assets of the household sector amounted to ₹ 12,35,622 crore, while the Central Statistics Office’s preliminary estimates at current prices of GDP for 2014-15 is ₹ 125,41,208 crore. The change in household gross financial assets works out to 9.85% of nominal GDP.

Households’ borrowings from banks fell by 40%, compared with a year ago, in 2014-15. With bank borrowings constituting a lion’s share of their financial liabilities, the latter, too, fell by a similar margin. The upshot was that although gross savings was low, net savings rose to 7.7% of GDP in 2014-15, compared with 7.4% in the previous year, because borrowings fell by a larger amount. 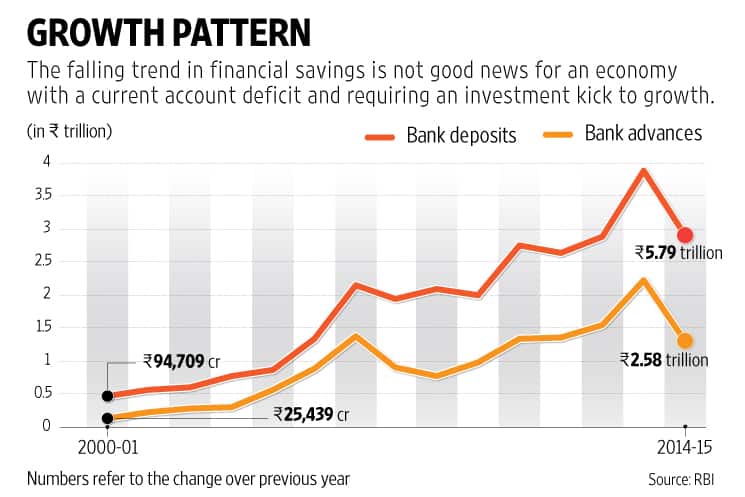 That might not be all. According to the Nirmal Bang note, the fall in financial liabilities indicates lower physical savings, which forms a larger portion (as much as three-fifths in some years) of total household savings. Consequently, the physical savings, too, have been lower in 2014-15.

Overall, net savings by households has been stagnant at around ₹ 20 trillion throughout fiscal years 2012-15. That is perhaps not surprising since households tend to save less in an inflation-ridden economy to maintain their standards of living.

Moreover, the situation may have deteriorated further this year. Says the Nirmal Bang note: “A look at leading indicators reveals that GFS (gross financial savings) may have declined further in FY16."

The falling trend in financial savings is not good news for an economy with a current account deficit and requiring an investment kick to growth.

It is yet another reason why RBI governor Raghuram Rajan may hold on to rates despite falling inflation and the window of opportunity afforded by the US Federal Reserve’s decision to delay its rate hike.