A year on, investors await justice in NSEL case

A recent outburst in a courtroom reflects the frustration felt by the near 13,000 investors who lost money in NSEL scam

Mumbai: Delhi-based senior citizens Jatinder Ahuja and his wife Renu Ahuja are not looking forward to their retirement.

About 80% of their retirement savings are trapped in National Spot Exchange Ltd (NSEL), and they are now losing hope of recovering any of the ₹ 1.05 crore they invested in the spot exchange.

They invested a chunk of this, ₹ 60 lakh, barely a fortnight before the fraud at the exchange came to light on 31 July last year.

“It was all our retirement savings, but I have lost all faith in this system," said Renu Ahuja.

She isn’t the only one to feel that way.

On 21 July, at least 50 disgruntled investors disrupted proceedings in room number 21-A at the Bombay high court. For a moment, the judge who was hearing the bail application of Jignesh Shah, managing director of Financial Technologies (India) Ltd (FTIL), the promoter of NSEL, was stunned by the uproar.

Investors filled the courtroom shouting slogans against Shah, who is in judicial custody in connection with the fraud, saying he had promised them assured returns.

An angry justice Abhay Thipsay, who was presiding over the case, immediately intervened to bring order back to the courtroom. “Just because you have lost money does not mean you will decide if someone should be punished or not," the judge said.

The outburst reflects the frustration felt by a number of the near 13,000 investors who have lost money in the ₹ 5,574.35 crore fraud at the exchange. FTIL owns 99.99% shares of NSEL.

On 31 July last year, what was then considered a settlement crisis at NSEL came to light when the exchange suspended trading in all but its e-series contracts. E-series contracts were meant to allow retail investors to buy and sell commodities in dematerialized form. These, too, were suspended a week later.

The suspension may have been prompted by an instruction from the ministry of consumer affairs to the exchange, asking it not to offer futures contracts. A spot exchange isn’t supposed to do so, but NSEL was doing that.

NSEL tried to implement the change, but because its appeal was to investors and members who were not interested in spot trades, it eventually had to suspend all trading.

It later emerged that all trading on NSEL happened in paired contracts, with investors, through brokers, buying a spot contract and selling a futures one for the same commodity. The entities selling on spot and buying futures were planters or processors and members of the exchange.

It turned out there were only 24 of them, and they used the paired contracts as a way to raise easy money. When the trading was suspended, the investors were left holding contracts that the members couldn’t buy because they didn’t have the money to do so.

On 14 August, NSEL proposed a payout plan, but it has been unable to stick to the schedule.

To be sure, many of the affected investors are wealthy individuals, but who likes to lose money?

While NSEL has managed to refund investors in its e-series contracts and a small fraction of the regular investors, roughly ₹ 5,334.31 crore of investor money remains stuck and the process of refunding investors has been excruciatingly slow.

Even though the Economic Offences Wing (EOW) of Mumbai Police, one of the agencies investigating the case, has attached assets worth 4,900 crore of the defaulting members, Shah and other officials of NSEL, under the Maharashtra Protection of Interests of Depositors (MPID) Act, the process of actually auctioning those properties to repay investors is yet to begin.

While the estimated value of assets attached is pegged at ₹ 4,900 crore based on book value, eventual proceeds from the sale may be lower. According to Rajvardhan Sinha, additional commissioner of the EOW, and an NSEL investor, Pankaj Saraf, who filed the first information report (FIR, a complaint of sorts) on the fraud at the exchange with the police, it will take at least a year for investors to receive a refund.

It could, of course, take much longer. “The liquidation process under the MPID Act completely depends on the decision of the court. It is a long process," said Sinha. Sinha cited the case of City Limouzines (India) Ltd to explain his point.

The Bombay high court gave permission to proceed with liquidation of assets of City Limouzines only in April 2013, nearly six years after the first complaint was registered by the depositors.

City Limouzines raised more than ₹ 1,000 crore from investors, promising them a 48% per year return on investments, as post-dated cheques. The first complaint was registered against it in September 2007 after it defaulted on returns.

“We as an agency can only hand over the properties secured for attachment to a court-appointed competent authority who oversees the liquidation process," Sinha said. 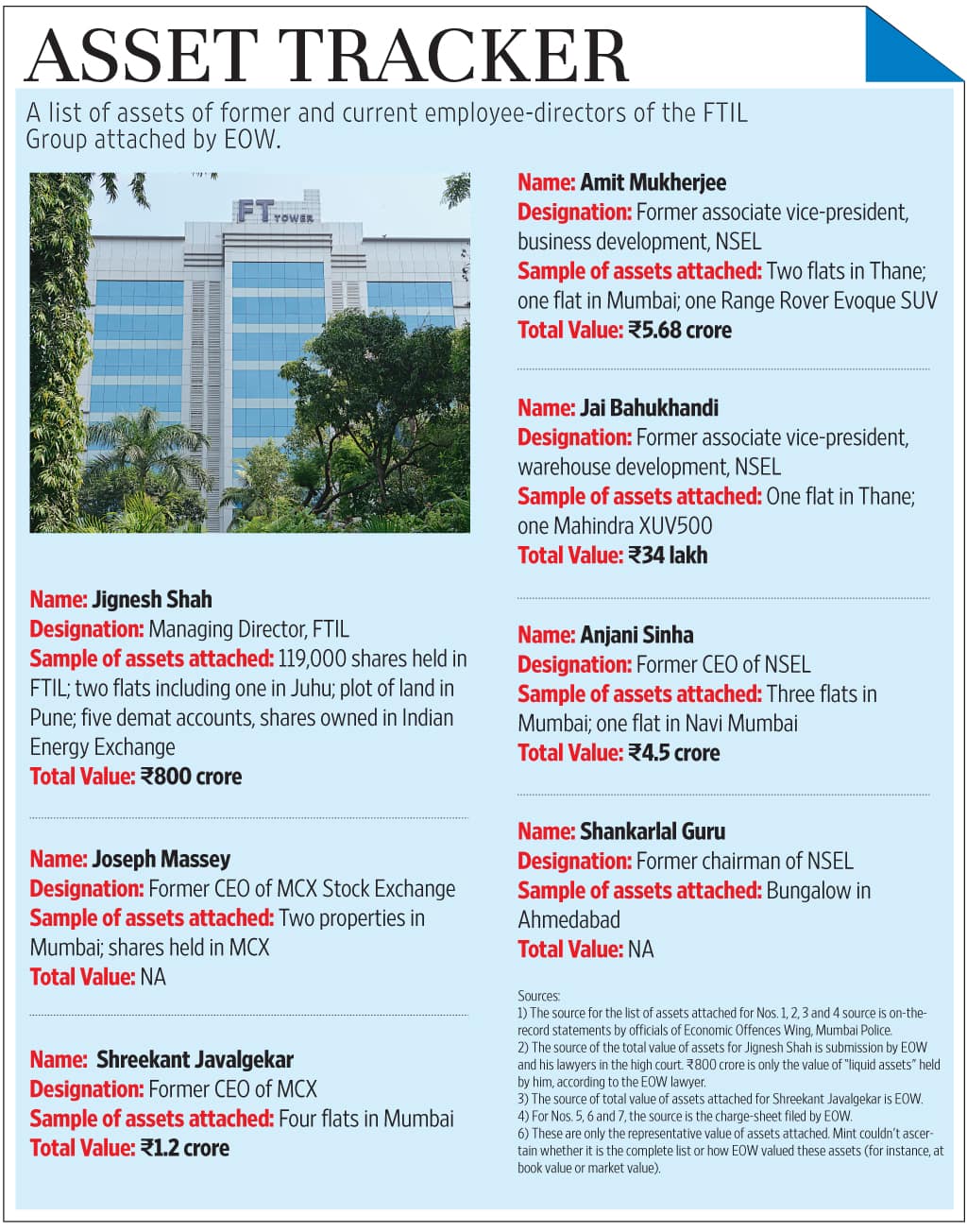 Explaining the process of liquidation of attached properties under the MPID Act, Piyush Vora, a partner at BDO India Llp, a consulting ﬁrm, said the investors may have to wait for two-three years for a refund.

“It is difficult to dispose immovable properties, and if the property is encumbered, the banks will have the first right to the sale proceeds. Besides, the decision of the liquidator can be easily challenged in a higher court," Vora said. “So I don’t expect any court controlled liquidation to happen in six months. It will take a while before people see their money."

Saraf, however, says the authorities concerned have not been quick enough.

“There are procedural delays. Both the EOW and the court are taking their own time to recover money from the defaulters," Saraf said. “For example, the first raid by the EOW on the defaulters took place two months after I filed the FIR. After a year, the EOW has now in July formed an SIT (special investigation team) to look into the case. They could have investigated the case faster."

NSEL has declared 22 members as defaulters after the crisis broke out, and the total amount outstanding from these defaulters’ stands at ₹ 5,334.31 crore. Only two of these 22 members—Mohan India Pvt. Ltd and Ark Imports Pvt. Ltd—have given their consent to the court for liquidation of properties under the MPID Act. These two defaulters collectively owe ₹ 1,294.5 crore to NSEL.

According to the website nseldefaulters.com, managed by NSEL, another two members—Topworth Steels and Power Pvt. Ltd. and Sankhya Investments—with a total liability of ₹ 196 crore have nearly cleared their dues. Most of the other members have moved the high court, disputing their liability as projected by NSEL.

Incidentally, Shah’s lawyers have pleaded in court that he should be granted bail as the recovery process has come to a halt in his absence.

Shah was arrested by the EOW on 7 May in connection with the payment crisis at NSEL. He has spent 75 days in custody. Shah’s arrest was the tenth and most crucial arrest by the EOW in the case. The investigative agency is expected to file a charge-sheet against Shah in the first week of August.

Other officials of NSEL who were arrested by the EOW are out on bail. Many of the key executives of defaulting members have also been granted bail. Shah, too, has filed for bail in the Bombay high court.

Sandeep Karnik, the lawyer representing NSEL’s investors, has claimed in court that Shah was aware of the unfolding crisis at NSEL. “Shah should submit in court a bonaﬁde offer for payment of money to NSEL investors," he said.

Karnik added that most of the investors put their money in the commodity spot exchange because of brand Jignesh Shah.

The investors are targeting his client because he is wealthier than the others accused in the NSEL crisis, says Shah’s lawyer Mahesh Jethmalani.

“The whole game is to ruin Shah’s reputation so that he comes under pressure and gives up his assets for recovery," Jethmalani said. “But he has not made money off the investors. He was wealthy even before the NSEL crisis broke out."

Mumbai-based housewife Sadaf Syed is one of many NSEL investors watching events play out with little hope of recovering their money. Syed has lost ₹ 20 lakh she and her husband saved up for a flat they have booked in New Delhi.

“Jignesh Shah was the face behind NSEL, and he was a big name. MCX (Multi Commodity Exchange of India) was a big name. All these factors instilled faith in the NSEL, and prompted us to put in our money," 32-year-old Syed said.

“We had never heard that an exchange can go bust," said Syed, explaining the shock at hearing that the exchange had come to a halt.

Syed’s family has now borrowed money from a friend to pay off the dues towards their home, and if the money does not come back, they might just sell the flat they purchased.

Renu Ahuja said she had spoken to Shah and Anjani Sinha, former chief executive officer of NSEL, many times after the crisis broke out, and was always assured that their money would be paid back.

“I will never ever put my money in commodities again," she said. “It has broken me completely on all counts."

This is the first part in a series on the fallout of the fraud at NSEL.