The operating margin of the stand-alone entity, at 29.4%, soared by 470 basis points (bps) from a year ago and even surpassed Bloomberg’s analysts’ consensus estimate by 330 bps. One basis point is 0.01%. This was the result of a 39% rise in exports, accounting for two-thirds of total revenue. The non-auto segment, albeit a relatively small part of the business, clocked a 40% growth in revenue.

Note that, on the whole, shipment tonnage grew by 19% from the year-ago period, reflecting improvement in demand for forgings across regions. Revenue from the American region grew by 76% from a year ago and 13% from the March quarter. A statement said improved economic activity in the US and orders to replace older fleet drove volumes in the commercial vehicle sales, which, in turn, helped Bharat Forge. Growth rates in Europe, were, however more subdued and are likely to remain so till the end of the calendar year. 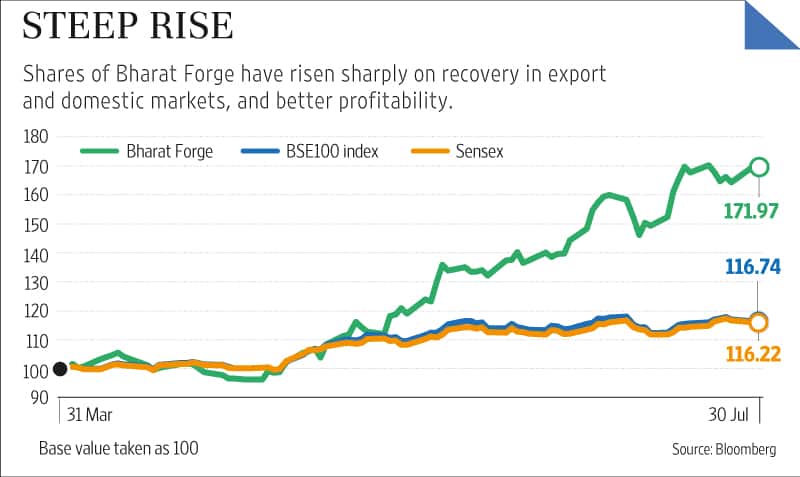 In the coming quarters, Bharat Forge expects traction in the global passenger vehicle business, where recovery will enhance revenue from the original equipment manufacturers both on home ground and overseas.

That said, overseas subsidiaries did not show any significant growth in revenue or profit. Improvement in business climate and higher utilization of capacities are imperative to pushing up profitability. In fact, the June quarter’s operating margin at 7.3% was 150 bps lower than a year back, although profit from overseas operations is a minuscule part of the consolidated entity.

Stand-alone net profit, however, more than compensated for overseas business as it more than doubled from the year-ago period to ₹ 152.5 crore (after adjusting for forex losses). Bharat Forge’s stock has doubled in the last six months and changes hands at ₹ 720.5. According to Surjit Arora, analyst, Prabhudas Lilladher Pvt. Ltd, “A 44% compounded growth rate in earnings per share over the next two years implies that the stock is trading at around 21 times fiscal 2016 estimated earnings." That indicates the stock is fairly priced. Nevertheless, higher demand from overseas markets and the 8-10% earnings upgrade expected following the robust June quarter performance could lead to further gains.