Ready for a cashless economy?

India continues to be driven by the use of cash; less than 5% of all payments happen electronically

The finance minister, in his budget speech, talked about the idea of making India a cashless society, with the aim of curbing the flow of black money. But what exactly is a cashless economy? It can be defined as a situation in which the flow of cash within an economy is non-existent and all transactions have to be through electronic channels such as direct debit, credit and debit cards, electronic clearing, payment systems such as Immediate Payment Service (IMPS), National Electronic Funds Transfer and Real Time Gross Settlement in India.

In the history of money, the arrival of banks brought in the need for paper currency. Banks had a limited supply of gold and silver and realized that their lending capacity was constrained by this. Hence, they started issuing paper notes in excess of their reserves. This was followed by the governments printing notes that were redeemable for gold and silver. But they printed notes in excess of their reserves. The problem was when people lost confidence in the paper notes and tried to redeem them for gold and silver, the system collapsed, for example, in Germany after the World War I.

This phenomenon of people losing faith in paper money has been repeated often. Whenever governments have printed more currency than reserves, the value of the currency has depreciated.

India continues to be driven by the use of cash; less than 5% of all payments happen electronically. This is due to lack of access to banking for a large part of the population as well as cash being the only means available for many. Large and small transactions continue to be carried out in cash. Even those who can use electronic transfers, use cash. When A.T. Kearney surveyed consumer behaviour at malls, it found that close to 90% transactions happened by cash. E-tailers give the cash on delivery (COD) facility to expand consumer base. While the proportion of people opting for COD is decreasing, it still accounts for 60% of transactions. Even the luxury retail segment sees most transactions in cash.

While cash remains the preferred choice, there has been a big build-up in the payments infrastructure. There are over 1 million point of sale terminals for over 500 million debit and 20 million credit cards. Cash and cheque, which formed 94% of all transactions in 2003, may fall to 13% by the end of this decade.

The telecom industry is expected to boost the digital shift. Analysts expect the smartphone market to exhibit a growth of four times over the next five years along with a growth of seven times in the number of customers using mobile banking. We can estimate the upside potential from the fact that India has less than 40 million mobile banking users while each of the top three Chinese banks have in excess of 100 million. 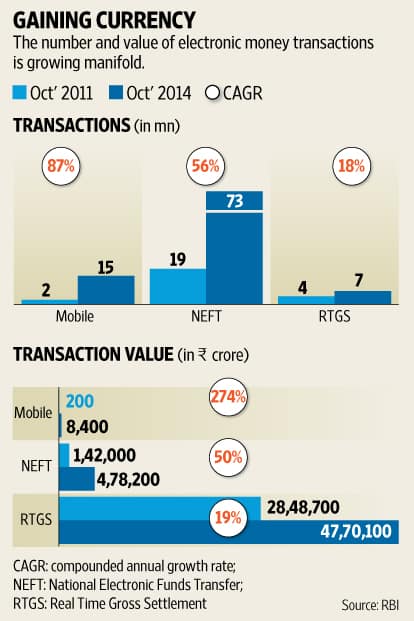 As per the annual report of the Reserve Bank of India (RBI) for 2013-14, the amount of currency in circulation stood at ₹ 12.83 trillion with a compounded annual growth rate of 10% over the past two years. About 5% of the amount is with banks. This implies that almost the entire amount is in daily circulation, which is reflected in the ₹ 32.1 billion cost of just printing the notes. Adding and running ATMs costs banks ₹ 1,520 crore a year. Even the RBI governor had recently commented that it costs banks about ₹ 75 per transaction when a customer uses an other-bank ATM and that customers transacting less subsidize the frequent transactors.

Even by liberal estimates, the direct cost of running a cash-based economy is close to 0.25% of India’s gross domestic product (GDP).

The benefits of a less-cash economy are for individuals, too. No need for queues outside ATMs, no cashout during long holidays, no waiting for a deposited cheque to be credited, and no risk of carrying currency notes in the wallet. Cashless transactions with the enhanced security procedures address each of these problems.

Reducing use of cash would also strangulate the grey economy, prevent money laundering and even increase tax compliance, which will ultimately benefit the customers at large.

Usage of cashless mechanisms would also ensure that loopholes in public systems get plugged, and the intended beneficiaries are able to avail the benefits due to them.

While there are many direct benefits of going cashless, the indirect benefits perhaps carry greater significance, most important of these being increase in the pace of circulation of money. Cash, being material, can be prevented from circulation. For example, cash that a tourist brings back unused from a foreign visit will lie idle till her next trip. Cards and electronic channels act to alleviate this friction and increase circulation. In economic terms, the “velocity of money" increases and we see the effect of the Keynesian multiplier. A Moody’s report pegged the impact of electronic transactions to 0.8% increase in GDP for emerging markets and 0.3% increase for developed markets.

As of now, a mix of cash and cashless transactions take place. in some cases using cash is cheaper, while in others cashless transactions are cheaper—cash transfer in banks versus using a cheque, or sending a money order versus transferring money online through, say, IMPS. Over the past few years, many enablers have been put in place to aid this journey. A tectonic shift, however, will definitely come from the smartphone wave.

While a cashless economy is not here, the move towards a less-cash economy has begun.