Market round-up: FII interest in Indian debt may not sustain

Foreign institutional investors’ (FIIs’) interest in the Indian debt market has revived in recent months. After recording outflows of $7.1 billion during October 2016-January 2017, FIIs invested $7.4 billion in the country’s debt market since February 2017, according to Icra Ltd. In particular, inflows stood at $3.9 billion in March 2017, the highest monthly tally since December 2011. The good run may not continue, however. Icra points out, “The recent surge of FIIs investments into Indian debt is unlikely to sustain in the remainder of this fiscal, as factors such as a likely compression of spreads, geopolitical tensions and the sharp appreciation of the INR (rupee) would temper the attractiveness of purchasing Indian debt."

Global wind power capacity additions, which fell 14% in 2016, are forecast to resume growth this year. Global Wind Energy Council (GWEC) estimates the total wind power capacity additions to grow by about 8% to 59.4 gigawatts (GW) this year. The capacity additions are estimated to be driven by China, India, and general recovery in Africa, and Latin American countries. In 2016, the world is estimated to have added 54.6GW, down 14% from a year ago. “From where we sit here at the end of March 2017, it looks like solid if unspectacular growth in 2017, a flat 2018, then moderate growth through the rest of the decade," GWEC said in a note. Robusta coffee’s biggest plunge in half a decade took hedge funds by surprise. The beans, used in instant coffee, are heading for the largest five-day slide since July 2011 in London. The drop began a day after hedge funds were near the most bullish on record and has continued even as a technical measure indicated prices were oversold. The slump over the past week pushed prices below both the 100-day and 200-day moving averages, levels often used by traders to predict future moves. Robusta coffee’s 14-day relative-strength index has fallen to about 19, signalling prices may have dropped too fast. While the market is facing a third annual shortage, more supply from key growers has eased concerns about short-term tightness and cut price gains in the past year to 22%.Bloomberg 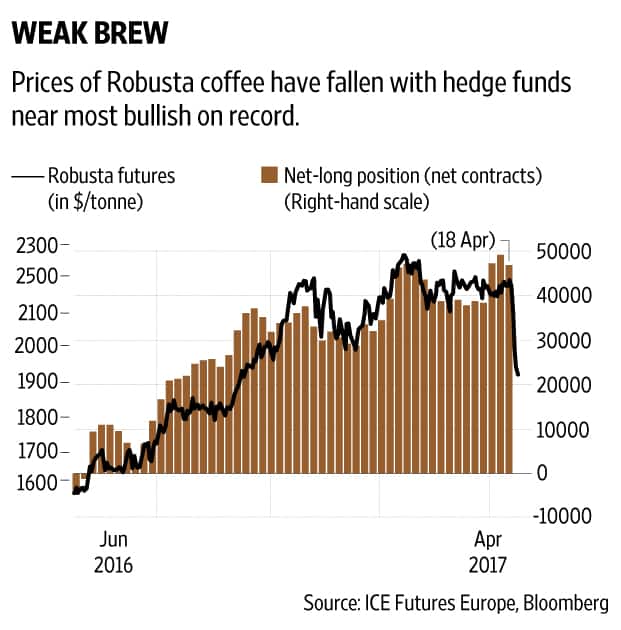