It’s well known that year-on-year comparisons of corporate results for the December quarter may not say much, simply because the year-ago period was the quarter immediately after the collapse of Lehman Brothers Holdings Inc. Would a sequential comparison be more apt?

The chart (above) shows the sequential growth in the companies that comprise the National Stock Exchange’s Nifty index, leaving out banks and oil companies, the latter because their profits are in large part dependent on the subsidy burden they have to bear and the former because their revenue and profits are dependent on factors very different from those of other companies. Only firms that were part of the Nifty since the December 2005 quarter have been included. 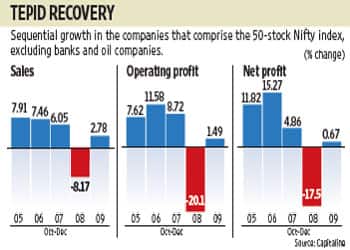 The numbers suggest that while a recovery has begun, it hadn’t yet built up enough momentum in the December quarter. Since then, however, macro indicators such as the HSBC Purchasing Managers’ indices for both manufacturing and services as well as the rebound in non-oil imports suggest that the recovery is getting stronger; and companies are also seeing a return of pricing power. That should be reflected in the current quarter’s corporate results.