Are affordable homes for you?

Investor interest has increased in affordable housing, but it needs to carefully considered

Vikash Dokania, 34, a chartered accountant working with a multinational beverage company in Gurgaon, bought an apartment in an affordable housing project in Gurgaon two years ago; the project is expected to get completed in 2020.

“I am not certain whether I will live in it once I get possession, but I believe if I decide to sell it, I will make good returns over the investment because there is no other project is this price range in Gurgaon," he said. Dokania is not the only one who thinks affordable housing projects are good investments. In the last few years, affordable housing became the silver lining for the realty sector that has given negligible returns in the last few years.

In the last five years, real estate has witnessed continuous fall in demand, with the exception of affordable housing, which prompted some developers to launch projects in this segment.

“The significant trend is that the share of new affordable supply has been rising since 2015. Interestingly, due to multiple sops being offered by the current government and the rising demand from ‘real’ users, developers are launching more units in the affordable housing category," said Anuj Puri, chairman, Anarock Property Consultants. As a result, since 2017, the share of affordable units has dominated the overall supply in the residential market—45% in 2017 and 40% in 2018, added Puri. 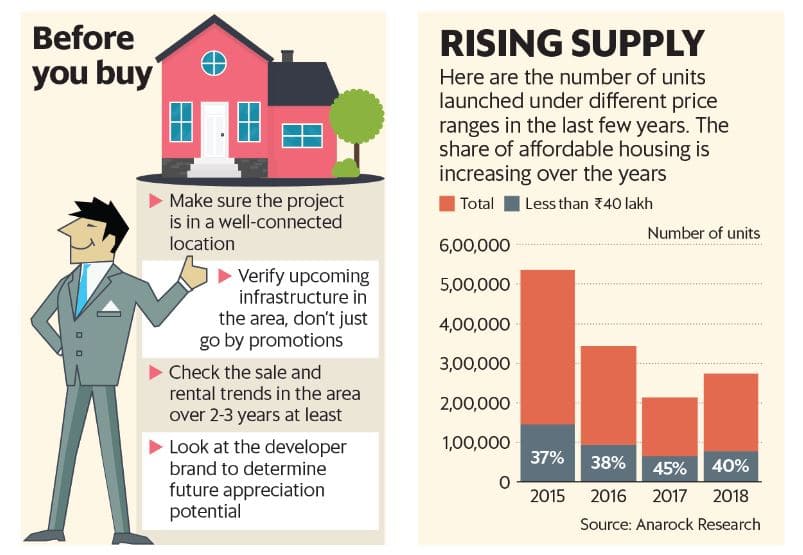 According to a half-yearly (July-December 2018) report by Knight Frank India, a real estate consultancy firm, “during the period, 60% of all launches were within the ₹ 50 lakh bracket and most developers are concentrating on the affordable and mid-range segment."

Despite the launches, demand is still much higher than supply. Pradeep Aggarwal, co-founder and chairman, Signature Global, an NCR-based developer with maximum projects in affordable housing, said, in a recent interview with Mint, “Affordable housing witnessed a growth of 22% in sales during 2018. Even this number is not big because there are only a few developers in this segment at present. Demand is huge and supply is limited. Once more developers start offering projects in this segment, it will witness tremendous growth." Read the full interview .

Most experts believe that supply in affordable housing segment will improve as developers are now focusing on the segment. “Developers have realised the potential of low and mid income ticket sizes and have been rationalising product portfolio to match underlying end-user demand. The trend will continue in the medium term as well," said Rahul Prithiani, director, CRISIL Research.

On the demand side, “we foresee affordable housing to be the key driver for demand in residential sector in the next few years," said Nikhil Bhatia, managing director and co-head, capital markets, and head, western region, CBRE India.

Previously dominated by end users, the affordable segment is now also attracting investors who see the possibility of better returns as compared to other residential segments, including luxury and ultra luxury projects. Currently, even while end users are driving its growth, investors are eyeing it for decent returns, added Puri.

Various factors are expected to drive returns. First, some state governments have capped the sale prices by various housing development schemes. For instance, under Haryana government’s Affordable Housing Policy, a developer can charge a maximum of ₹ 4,000 per sq. ft from homebuyers. Apart from that, a homebuyer can avail a subsidy benefit of up to ₹ 2.67 lakh under Pradhan Mantri Awas Yojana.

Compared to other housing segments, additional perks on affordable housing makes it attractive. “Affordable housing is touted to be the major game-changer. The average returns an investor can expect on a yearly basis are 8-10%," said Puri.

However, some experts believe that not all affordable housing projects are going to provide good returns. “Projects which are within city limits or in an already developed locality will do better, but such projects are limited. Projects that are in far-off areas will give approximately similar returns to other segments," said Mudassir Zaidi, executive director, north, Knight Frank India.

If you want to ride on the affordable housing wave and want to invest in an apartment, be careful about the location and ensure the area has basic infrastructure. Also, compare the prices before settling for a deal.