Sensex rallies to 35,081.82 points on hopes of a corporate earnings recovery and government's effort to contain India's fiscal deficit by reducing additional borrowing

New Delhi: Indian stocks crossed new milestones on Wednesday on hopes of a corporate earnings recovery and the government’s effort to limit a fiscal slippage in the current financial year. However, high crude oil prices and interest rate hikes by foreign central banks remain key risks to the rally. 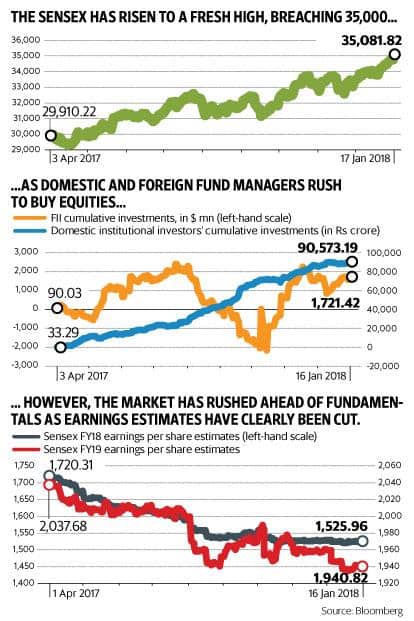 Early on Wednesday, the government pared its additional borrowing programme in the year to 31 March to Rs20,000 crore from the Rs50,000 crore it announced last month, giving investors hope that the fiscal slippage will be contained. The fiscal deficit reached 112% of the full-year budget in November. Investors have also been fretful that the government may stray off the fiscal consolidation path in the 1 February budget, its last before the 2019 general elections.

The abatement of some of these worries, along with optimism of an earnings recovery, continued to pull in money. Analysts are expecting the first signs of a rebound in corporate earnings growth in the December quarter owing to the favourable effect of a low base a year ago and higher consumer spending in the festive season.

Those expectations have overriden concerns over high valuations. Currently, the Sensex is trading at 20.39 times expected earnings for the next 12 months.

Fund managers are still reluctant to declare the rally to have entered bubble territory.

“Liquidity is driving the markets. There are pockets of bubbles in selective small and midcap stocks. However, on a relative basis, large caps have a higher margin of safety. For such high valuations, it is imperative for earnings to catch up," said Navneet Munot, chief investment officer at SBI Funds Management Pvt. Ltd.

Foreign investors have bought Indian shares worth $278.65 million while domestic mutual funds and insurance firms have pumped Rs1,027.01 crore into stocks since the start of 2018. In 2017, domestic institutions bought Indian equities worth Rs90,834.80 crore and foreign investors were net buyers of $8 billion.

With the December quarter earnings season underway, the markets are eyeing the Union Budget. An increase in spending on rural, social and agricultural sectors will provide more legs to the rally, said experts. The possible introduction of a long-term capital gains tax could be a deterrent. Currently, India taxes only short-term gains (those accrued within a year).

Fund managers do not rule out short-term disruptions from other factors. For one, the crude oil price hovering near $70 a barrel level can stymie an earnings recovery by squeezing margins. Secondly, global central banks are reducing their bloated balance sheets, which could lead to a reversal in foreign investor inflows.