The collapse of Lehman Brothers in 2008 jolted people out of their comfort zones. While it unleashed chaos as many lost their investments in the equity market and many others their jobs, it also paved the way for several financial reforms. On its 10th anniversary, we take stock of how the crisis changed the financial landscape of India and the lessons it taught

For Tushar Dan, the global financial crisis came as a blessing. Dan was at the cusp of a career shift and had been convinced by well-wishers to use the surplus money he had to invest in equity mutual funds (MFs) instead of buying a car. After some persuasion, he invested ₹ 2 lakh ( ₹ 40,000 each) in five mutual funds, around January and February 2009. Equity markets had already corrected significantly after the credit crisis led by the collapse of Lehman Brothers Holdings Inc. By mid-2010, when he checked his MF investments, he was pleasantly surprised to see his investments had doubled. Dan swears by MFs for equity investment but is waiting for the right investment advisor to come along to restart investment in MFs.

In 2008-2009, during the worst part of the global financial crisis, some investors like Dan came out on top, others got hurt. Sensex fell around 30% from August to October 2008 and the BSE Mid Cap Index and BSE Small Cap Index fell around 45%. By March 2009, a monthly SIP in a large-cap diversified fund for two years would likely show a fall of 30%. If you were already invested in equities, directly or via MFs, your portfolio was not immune. The global financial crisis had some important lessons for investors. We look at some of them.

Also Read: Opinion | Is there any anniversary effect of the 2008 crisis

Arnab Banerjee, a professional with a private sector company saw his portfolio get eroded by 25-30% as the crisis deepened. But he decided to remain invested, unwilling to book losses. Also, he realised, a lot of what was causing the panic had little to do with the Indian economy. Moreover, he didn’t need the money right away and was prudent not to panic. Whatever the reason, staying invested was perhaps the best decision at the time. Selling his stocks and funds would have meant booking losses, which could have never been recovered. By staying invested, he recovered the value of his investments over the next few months.

“We were honestly going with the flow. At the time (around the year of 2008) many held on but, say, a fourth of our clients exited the markets. Years later in 2013 when the market was again depressed, a similar situation with clients yielded very different results as we were better prepared with the right questions to assess their risk capability and to reassure them of long-term returns," said Tarun Birani, founder and chief executive officer, TBNG Capital.

Equities is not about quick returns rather about building wealth over many years. Accordingly, over time sectoral funds lost sheen as investors began looking at diversified funds and opted for systematic investments.

Also Read: Has the financial landscape in India changed over 10 years since the global meltdown?

Debt funds are risky too

Returns from fixed income funds suffered too as lack of liquidity or money flow in the bond market meant only a few transactions were being completed and not at the desirable price.

“Debt fund investors had panicked and were withdrawing prematurely. Illiquid markets made situations worse and that sent bond prices—and the net asset values of debt funds—tumbling down," said Ganti Murthy, a former fixed income fund manager, who has worked with asset managers like IDBI Asset Management Ltd, Peerless Fund Management Co. and SBI Funds Management Ltd, and is on a break at the moment.

The problem arose, thanks to a partial paralysis in bond and money markets; it was hard to raise money for redemptions just by selling securities. Fixed maturity plans (FMPs) and liquid funds are inherently considered stable-return products; investors panicked when it was not a smooth ride redeeming their own money. “An FMP makes for a good alternative to bank FD; but back then there was only an exit load on FMPs. People just wanted to hold cash; there was panic to withdraw. We took three options to create liquidity, selling securities, borrowing from banks and later RBI opened a special line of credit for MFs," said Mahendra Jajoo, head fixed income, Mirae Asset Management Co. Jajoo has joined Mirae AMC recently and was working with a different fund house in 2008.

Also Read: The 2008 global meltdown and the birth of Bitcoin

In late 2008, Sebi disallowed investors to withdraw from FMPs by just paying an exit load, though technically they were closed-end. Sebi said these FMPs will have to list on exchanges to provide an exit window to investors. Also, to ensure the value of debt funds are more realistic, it said the funds would need to increasingly peg the prices of their underlying securities to market prices. All such securities that mature beyond 91 days would need to be marked to market. Earlier, only those securities that used to mature beyond 180 days were marked to market. A valuation matrix for securities with more than 91-day maturity was to be referred for pricing them on a daily basis where such securities were not traded on a regular basis. All this was done to enable better price discovery and to safeguard, to whatever extent possible, a spillover effect of such a liquidity crisis. 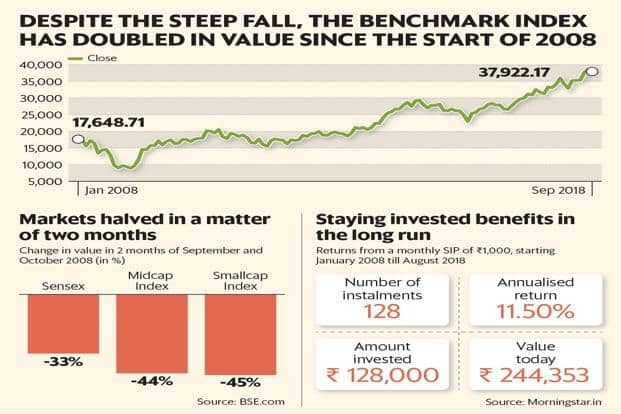 The crisis brought with it a lot of chaos, but as they say there is always a silver lining to every dark cloud. This was spotted in the insurance sector as unit-linked insurance plans (Ulips)—the most dominant product sold at the time—came under spotlight for exorbitant costs.

In fact, the market downturn for a front-loaded product like Ulip meant loss of capital and that exposed rampant mis-selling. “Till such time the markets were moving upwards, high costs in Ulips were not felt. But during the downturn, people saw erosion of wealth, as investors lined up to withdraw their money from Ulips," said Tarun Chugh, managing director and CEO, Bajaj Allianz Life Insurance Co. Ltd. “Complaints from policyholders rose and the fact that Ulips were being mis-sold was realised. This in some ways marked the beginning of reforms in the insurance sector in India, as well as making Ulips low-cost now," he added.

Also Read: Money lessons from the financial crisis for SIP investors in India

The global financial crisis in 2008 was a defining event for financial markets across the globe. But like any other crisis, this period also brought forth some important lessons for money management that will always come handy.

Also Read: Strategies to cope with the stress of job loss in times of crisis