A hundred-and-forty countries are already familiar with the goods and services tax (GST) or value-added tax. But in its current form, India’s GST is complicated and very different from the global variety. A multi-tier tax rate structure and complex rules make execution of this mammoth indirect tax a herculean task.

Unlike other nations, goods and services in India will be charged at different rates depending on the categories they belong to. Tax rates for 1,211 items have been finalized, though rates on six crucial and controversial items including gold and beedi are yet to be decided.

For services like hotels, restaurants and transportation, tax rates have been fixed based on room tariff, turnover of business, etc. This, say tax experts, is not in line with the international practice, where a uniform rate is applicable on a service irrespective of the value or status of the business.

As the accompanying chart shows, barring Canada, the threshold for GST applicability in other countries is higher than in India. A higher threshold was desirable as it would have reduced the tax burden on small businesses. 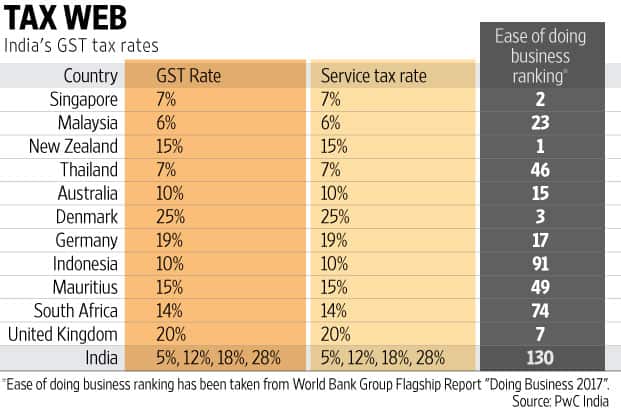 Meanwhile, Amit Bhagat, partner (indirect tax) at PwC India, foresees the concept of reverse charge—which comes into play when one buys goods from an unregistered GST firm—as a major issue. He added that the number of returns companies will have to file in India under GST is also higher than what it is in other nations; though automated, it still raises compliance costs.

The exemptions list too is limited in other nations, say tax experts. In India’s case, most services-related exemptions have been retained for now. The fate of item-wise and area-wise exemptions is yet to be known. Despite ambiguity still prevailing on some GST rules and rates for certain goods, the government is not in a mood to give its 1 July implementation deadline a rethink. In Malaysia, more than a year’s time was given to the industry to prepare for the tax change. The fear is that lack of preparedness due to paucity of time may lead to near-term disruption for businesses.

However, what worries tax experts the most is the anti-profiteering clause, as it has been unsuccessful in yielding the desired results in countries where tested. The clause requires businesses to pass on the tax reduction to the end consumer by way of a commensurate reduction in prices. It remains to be seen whether its outcome will be any different for India.

Failure or delay in price reduction would have a bearing on inflation. Though the government is confident of GST being non-inflationary, international experience suggests otherwise.

“In numerous countries, GST tax was introduced at a lower rate than pre-existing tax rate. Despite that, the GST pushed up inflation for one year in all the five countries in our study (Australia, Canada, Japan, Malaysia and Singapore), after which inflation moderated. In some countries, the pass-through of higher tax costs by firms occurred with a lag, as firms took time to fully assess the cost implications of the new tax structure," Nomura said in a recent report.

To conclude, a simpler tax law results in better tax compliance and improved tax collection efficiency. But with a complex GST, India may have many more teething troubles to overcome compared to other countries that have adopted this tax.