What you should know before going solar

When the purpose is everyday residential use, setting up solar panels remains an expensive proposition

In February, Prime Minister Narendra Modi suggested installation of solar panels over water bodies and rooftops while speaking at a renewable energy conference, RE-Invest 2015. But Bengaluru-based P.G. Ganapathy, 45, an independent consultant and adviser in water, environment and sustainable living, adopted rooftop solar panels for his daily use in October 2012. “The primary reason to switch to rooftop solar panels was my passion for sustainable living," said Ganapathy. Many people are interested in going solar, for various reasons, but wonder if it’s worth it in terms of return on investment and savings. And, of course, what happens on rainy days?

To set up a rooftop panel for residential consumption, you will need space. Do you have an independent rooftop? Is the rooftop big enough for the number of panels you need?

The higher your consumption, the more space you will need to install the rooftop panels. Hence, the solar solution works for those who have an independent house with a large enough rooftop. In case you live in an apartment, where you share the terrace with others, you may have to take the approval of the society or your neighbours regarding space available and installation.

If you are living in an independent house or have access to a rooftop, then the next most important thing to check is sunlight access. Ample sunlight is needed to realize the full value of the panels you install. This also means the rooftop should be free from any shadow, from tall buildings or trees.

“The way you position the panel also helps in proper utilization. The rooftop panel will have to face south of the latitude, and the way it is positioned depends on your location. For instance, if you live in Goa, the solar array will have to be tilted 15 degrees to the latitude angle, in case of Mumbai it will be 12 degrees and for Bengaluru, 10 degrees. The idea is to get maximum sunlight to generate power," said Jeeth K. Iype, an architect with Bengaluru-based Good Earth, an organization of architects and engineers experimenting with alternatives in architecture.

By adjusting the incline of the panel you can utilize the rooftop solar panels to the fullest. Remember that during winter and rainy season panels generate lower power than summers.

To move to solar, you will need solar panel(s), inverters or UPS (uninterruptible power supply), and wiring, apart from an understanding of your power consumption pattern.

A solar panel is a photovoltaic module that generates and supplies electricity from sunlight. The cost of a rooftop solar panel depends largely on quality. At present, a good quality rooftop panel of 1 kWh (the output) will cost ₹ 75,000- ₹ 1 lakh. The number of panels needed will depend on the number of units of power consumed daily. Simply put, if your electricity bill is, say, ₹ 1,500 (250@ ₹ 6 a unit), you will need panels with output of about 2 kWh, which will cost you about ₹ 2 lakh. If the panels produce about 180 units, you will be able to save ₹ 1,100 a month. 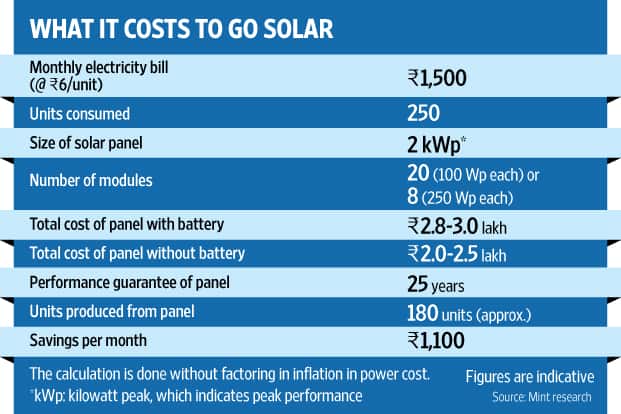 Next comes battery. Since solar power can be generated only during periods when ample sunlight is available and not when it is raining or overcast, you will need to save the generated power so that it can be consumed later. For this you will need a battery. This will increase the overall cost. In our example, if the panel cost ₹ 2 lakh, you will have to pay about ₹ 2.8 lakh for panel with battery.

The good news is that the cost of solar panels has come down drastically in the past few years, mostly dues to imports from China. “When I bought the 1.5 kWh panel for my house in 2012, I had to pay ₹ 4 lakh-plus taxes. Now it will cost around ₹ 2 lakh plus taxes, including the battery," said Ganapathy.

Another way of using solar power generated is to feed it to a grid. The government has been working on providing net metering, which requires you to install only the panel and do away with the battery. The process is called net metering. “Net metering is a meter that feeds power to a grid. It is similar to the meter that you have at your house for electricity, which shows you the number of units you have consumed and based on which you get a bill at the end of the month. With net metering, the solar power you generate gets fed in the grid, and depending on the usage, the cost will be reduced by your utility service provider," said Shirish Garud, senior fellow and associate director, energy-environment technology development division, The Energy and Resources Institute.

To give you a perspective of how net metering works, here is an example. Say, you have a solar panel that has generated more power than what you require. Instead of wasting it, you can pass the excess power to a grid through net metering. Also you can tap into the grid for your power needs.

You can earn from feeding excess power into the grid. This facility is provided by the government in certain states. Karnataka, for example, has got approval for net metering, but the facility has not reached consumers yet. If you have the option of feeding excess solar power into a grid, you should opt for it instead of using a battery as it is cost effective and there is no wastage of power.

The viability of installing solar panels on your roof to a certain extent depends on the government policies, which can make it conducive to use solar.

The government has been trying to encourage usage of solar power both in the commercial and the residential space. As of now, state electricity regulatory commissions of 17 states have notified regulatory frameworks on net metering or feed-in-tariff to encourage rooftop solar plants. The central government has also made attempts to provide financial support to those who want to go solar. For instance, this month, the department of financial services has instructed all public sector banks to encourage seekers of home loans or home improvement loans to install rooftop solar panels and include this cost in their loan proposals.

Remember that moving to solar energy is not a possibility for everyone. For instance, physical factors such as amount of sunlight received, direction, space available and such are not in your hands. Sector experts are of the view that in the long run, solar panel instalments can be cost effective if there is maximum utilization of power generated, quality of the panels is good, government support is available, and the set-ups are properly maintained. “For me, it doesn’t make economic sense right now," said Ganapathy. “But compared with diesel generated power, it is a better option. The economics of solar to a certain extent will depend on implementation of net metering. Also, if tariff of regular electricity goes up in future, solar will save some money," he added.

The financial viability of having solar panels installed for residential consumption has to be decided on a case-to-case basis. There isn’t a one-size-fits-all solution. But if you have no access to electricity, or clean energy is your aim, going solar is a good and easily available option. “I knew that solar would not help me save much. But I didn’t go for economic logic; it was the idea of clean energy that made me embrace solar," said Ganapathy. Better technology, lower costs, and a grid system (net metering) will further improve the prospects of individuals using solar power.