The BSE Sensex trades lower by over 300 points, and the Nifty 50 slips below 10,700. Here are the latest updates from the markets

OTHERS : Mumbai: Indian benchmark indices slumped over 1% on Thursday following a selloff in Asian markets, and as investors turned cautious ahead of corporate earnings beginning next week. The Indian rupee weakened against the US dollar for the second session, tracking losses in Asian currencies. The BSE Sensex closed 377.81 points, or 1.05%, down at 35,513.71, and the Nifty 50 ended 120.25 points, or 1.11%, lower at 10,672.25.Among major movers, shares of Dena Bank and Vijaya Bank slumped, while Bank of Baroda shares jumped after BoB announced share swap ratio of their proposed merger. Select auto stocks, including Eicher Motors and M&M, extended losses following disappointing December vehicles sales data.The BSE midcap and smallcap indices fell 1.46% and 1.03%, respectively. All the sectoral indices on BSE, barring FMCG and telecom, posted losses, with metal losing most at over 2%. Oil and gas, basic materials and energy were down over 1.3%.HCL Tech, Titan, Bajaj Auto, Asian Paints, Hindustan Unilever and Bharti Airtel were among the major gainers on the key indices, whereas Eicher Motors, M&M, Vedanta, Tata Steel, HPCL and ONGC were among the top losers.“It’s the anxiety on global front which is haunting our markets now. And it may continue to linger for some time and then earnings season would take over,” said Jayant Manglik, President, Religare Broking Ltd. “Nifty may see fresh fall below 10,650 and the next target could be 10,500.”In global markets, European stocks and US equity-index futures slumped after Apple added to global growth concerns with a cut in its sales outlook. Stocks in Asia were mixed, while there were wild moves in the currency markets as the yen surged. Oil prices slipped nearly 2% amid volatile currency and stock markets, and as analysts warned of an economic slowdown for 2019. Here are the latest updates from the markets:

The Supreme Court revived the class-action suit by the central government against it in the National Consumer Disputes Redressal Commission (NCDRC). Accordingly, the NCDRC will continue the proceedings against Nestlé based on the 2016 report of the Central Food Technological Research Institute (CFTRI) in Mysuru. Nestle India shares traded 1.55% up at Rs 11,218 per share. Read more

An Indian parliamentary panel on Thursday asked the central bank to review its rules on capital requirement for banks beyond the limits under the global Basel III capital regulations, which could improve their lending ability. “Such stringent norms stipulated by the RBI for our banks ... is unrealistic and unwarranted,” according to a report by the Parliamentary Committee on Finance. Reuters

Shares of Vodafone India plunged to their lowest in three weeks by falling over 5%, while Bharti Airtel shares declined over 1% after data released by Trai showed the two telecom operators losing subscribers to Reliance Jio Infocomm. Vodafone Idea shares fell as much as 5.17% to Rs 34.85 per share on NSE. Bharti Airtel shares declined 1.5% to Rs 307.95 per share. At 11.35am, Bharti Airtel was down 0.6% and Vodafone Idea traded 3.13% lower, while the broader Nifty 50 index fell 0.5%.Reliance Jio added 10.5 million users in October while Vodafone Idea and Airtel lost 7.3 million and 1.8 million users, respectively, according to data released by the Telecom Regulatory Authority of India (Trai) on Wednesday. India’s overall wireless user base grew by just 724,725 subscribers during the month. Read more

Shares of Dena Bank and Vijaya Bank dropped, while Bank of Baroda shares advanced after BoB on Wednesday announced share swap ratio for the merger. Bank of Baroda (BoB) said that shareholders of Vijaya Bank and Dena Bank will get 402 and 110 equity shares of BoB for every 1,000 shares they held. Read moreNomura: “We believe this is fair for BOB’s shareholders given BOB’s superior franchise and NPA coverage position. Our pro forma estimates indicate a merged company ROE of +12% by FY21F. The merger will be 4% book-accretive to BOB and 4% earnings-dilutive. BOB trades at 0.65x Sep-20F book on an adjusted basis, which we believe is undemanding.”Kotak Institutional Equities: The impact on book value combined would be negligible for BoB but this view is contingent on the timing of the pending capital infusion program and net worth adjustments that can happen prior to the merger. Focus now shifts to actual integration from financials.”Antique Stock Broking: “SME books of Dena Bank and Vijaya Bank are 5% of BoB loan book and 3.5% of the merged entity’s. Based on 1HFY19 reported numbers, the clean-up provisioning requirement could be Rs160 billion to Rs 180 billioin for the merged entity. While BoB and Vijaya Bank would be able to manage it from operating profits and do not need immediate capital support, Dena Bank is likely to need capital of Rs35-40 billion.”Elara Securities: “The bailout of Dena Bank comes at a cost, and the swap ratio reflects adjustments for net NPA; and, hence, we conclude banks with stronger balance sheet are likely to fetch better value for their businesses (in this case Vijaya Bank) while weaker franchises, which are struggling with stressed loans and provisioning burden, are likely to be bailed out at a discount.”Motilal Oswal: “The merger will now lead to the creation of the third largest lender in India, with an advances and deposits market share of 6.9% and 7.4%, respectively. While the process of merging multiple entities will present its own set of challenges in the near term, BOB stands to benefit over the long term, in our view.”

Shares of oil marketing companies Indian Oil, Bharat Petroleum and Hindustan Petroleum declined today after IOCL Chairman said the OMCs “are not recovering any of the losses” they made on subsidising petrol and diesel. Shares of IOCL, BPCL and HPCL fell up to 3%.The government in October 2018 cut excise duty on petrol and diesel by Rs 1.50 per litre each and asked PSU oil firms to absorb another Re 1 a litre. This immediately resulted in a Rs 2.50 per litre decline in prices which had touched an all-time high on rising international rates. IOCL along with HPCL and BPCL took a hit of about Rs 4,500 crore from absorbing Re 1 a litre hike. (PTI) Jet Airways shares fell as much as 4.9% to Rs 250.75 per share. Jet Airways on Tuesday delayed the payment to a consortium of Indian banks, led by State Bank of India Ltd. The payment of interest and principal instalment was delayed “due to temporary cash flow mismatch” and the company is in talks with the consortium. The deadline for the payment was Dec. 31, 2018, Jet said in a statement. On Wednesday. the stock closed 6.16% lower at Rs 263.75 per share, Read: After default, Naresh Goyal may have to give up Jet Airways to keep it afloat

Analysts fear a SBI to happen with Bank of Baroda after the merger with Dena Bank and Vijaya Bank. https://t.co/U6gyNrA7xi

The Indian rupee on Thursday weakened for a second session against the US dollar, tracking losses in its Asian peers amid mounting concern about the global outlook after Apple Inc. cut its revenue forecast. At 9.13am, the rupee was trading at 70.37 a dollar, down 0.22% from previous close of 70.17. It opened at 70.17. The 10-year gilt yield was trading at 7.393% from its previous close of 7.355%. So far this year, the rupee has declined 0.86%, while foreign investors have bought $67.7 million in equities and sold $80.60 million in the debt markets.

The yen jumped almost 8 percent against the Australian dollar to its strongest since 2009, and surged 10 percent versus the Turkish lira. The Japanese currency rose at least 1 percent versus all its Group-of-10 peers, bursting through the 72 yen levels against the Aussie that has held through a trade war, a stock rout, Italy’s budget worries and Federal Reserve rate hikes.
Read: Japanese yen soars, Aussie dollar plunges in FX ‘flash crash 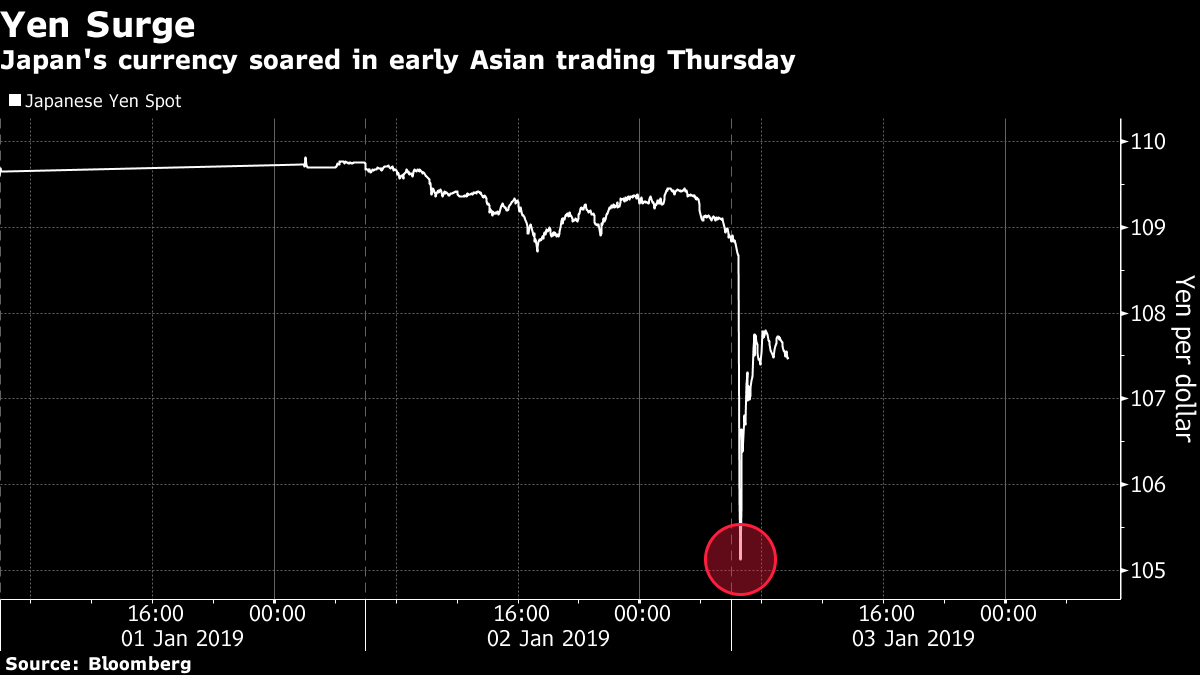 Oil prices fell amid volatile currency and stock markets, and as analysts warned of an economic slowdown for 2019 just as crude supply is rising globally. US WTI crude oil futures were at $45.93 per barrel, down 61 cents, or 1.3%, from their last settlement. International Brent crude futures were down 36 cents, or 0.7%, at $54.55 per barrel.Gold prices inched up on Thursday as a dip in Asian equities and worries about a sharp global economic slowdown propelled demand for safer investments. Spot gold gained about 0.2% to $1,286.62 per ounce, having earlier touched its highest since June 15 at $1,290.09. US gold futures were up 0.4% at $1,288.80 per ounce.Metals: London copper and aluminium edged higher, recouping some of the previous session’s deep losses although concerns over economic growth in top consumer China kept a lid on prices. Three-month LME copper rose 0.5% to $5,871 a tonne, having slid more than 2% in the last session. The most-traded copper contract in Shanghai fell 1.3% to $6,881.90 a tonne. Reuters

Indian shares retreated on Wednesday, amid continuing weakness in global equities. The 30-share Sensex ended at 35,891.52, down 363.05 points or 1% while Nifty was at 10,792.50, down 117.60 points or 1.08%. Global markets slumped after evidence of slowing Chinese growth dashed investor hopes for an upbeat start to 2019. The disappointing data out of the world’s second-biggest economy appears to have dented investor optimism.