This is a development that should get a smile on the faces of the harassed and cheated insurance buyers in India. The second wave of insurance regulatory reforms is underway and these promise to impact not just product structure and costs, but also insurance companies that will be brought to book by way of penalties. In the last seven months, there have been indications that the regulatory gaze of the Insurance Regulatory and Development Authority or Irda has gone beyond products to insurers. Since January 2012, about 10 insurance companies have been penalized. 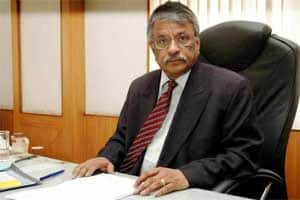 More insurers to come under the scanner

Though the insurance regulator is 12 years old, it has taken time to settle down into its regulatory duties, taking its development role more seriously in the earlier phase. The delay in policing the industry, says the regulator, is largely due to paucity of an inspecting team. “In 2010, the regulator did fine a lot of insurers but it is nothing like that in the recent times. It was largely based on customer complaints," says Kapil Mehta, managing director and principal officer, SecureNow Insurance Broker Pvt. Ltd. 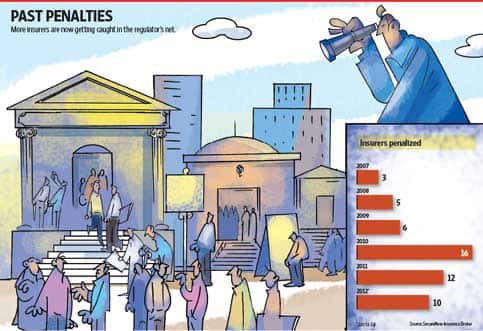 Illustration by Shyamal Banerjee and graphic by Sandeep Bhatnagar/Mint

Narayan is not going to stop at inspecting companies. “After insurers, we would also like to focus on entities such as corporate agents," he says. So far, Irda has penalized two corporate agents, Central Bank of India and IndusInd Bank Ltd for trying to be a corporate agent of more than one non-life company and charging more than the permissible limits, respectively. “These banks have been penalized in the capacity of a corporate agent. Irda is well within its right to penalize entities related to the insurance business," says Narayan.

Not only will the regulator chase more companies, it will also impose a stricter penalty. “Earlier, we didn’t have the capacity to segregate violations. But now we have begun segregating violations and are penalizing insurers for each violation," says Narayan. There are instances in the earlier orders, where the regulator has not segregated violations and imposed a collective penalty of ₹ 5 lakh.

Take the example of Max Life Insurance Co. Ltd that in 2008 was penalized on two counts: one, for allowing display material offering a rebate of 2% by their corporate agent and two, for offering loans on three unit-linked insurance plans or Ulips. However, the regulator collectively imposed a penalty of ₹ 5 lakh on the company. For a company that wrote new business of around ₹ 1,842.91 crore in FY09, this hardly seems a deterrent. But increasingly the regulator is pulling out each instance of violation and is penalizing the insurers accordingly. “This is because these penalties can be challenged in the court of law. Therefore, we need to be more elaborate," adds Narayan.

This can be seen from the recent penalty order that ran into several sheets pointing out each issue and Irda’s verdict on the matter. Earlier, the penalty orders were mostly wrapped up in a page and typically didn’t go beyond a fine of ₹ 5 lakh.

However, the segregation is not smooth still. For instance in FY11, ING Vysya Life Insurance Co. Ltd paid 135 referral partners in excess of the allowed limits, but they had to pay a penalty of just ₹ 5 lakh since the regulator took overpayment to 135 partners as a single instance of wrongdoing. But in June this year, HDFC Standard Life had to pay a fine of ₹ 35 lakh for seven instances of overpaying the corporate agent in FY09, FY10, and FY11. Each instance here meant overpaying one corporate agent and not clubbing of corporate agents. “The problem here is if you are going to implement each instance strictly then it will end up penalizing an insurer more whose quantum of default is less. So I would like to have some discrimination," says Narayan.

So going forward the quantum of the violation will also count, a practice the regulator may not have followed strictly till now. In July 2009, Irda penalized Reliance General Insurance Co. Ltd on two counts: first, for changing the name of their health insurance product without prior approval, and second, for revising the premiums upwards again with no prior approval. Irda noted that in FY08, the company sold 350,000 policies of the said product and accordingly the fine worked up to ₹ 17,500 crore. The regulator, even in the absence of any documentary evidence, accepted the appeal of the insurer in good faith that it had refunded the excess premium charged to the policyholders and brought the penalty down to ₹ 20 lakh. “The idea of a penalty is to ensure the companies take corrective measures," explains Narayan.

But that’s in the past. The good news for you now is that the regulator is serious not just in offering customer-friendly products but also to usher in best practices. It is hoped that increased vigilance and heavy penalty on defaulting companies will definitely clean up a lot of bad practices of the industry.