Home / Market / Stock-market-news /  Over the long term, the Sensex is a bond
Back
Share Via

Over the long term, the Sensex is a bond

Any day is a good day to invest in equity; provided you stay invested for longer durations

The past few days have been euphoric as the stock markets touched their new lifetime highs. On Monday, the 30-share S&P BSE Sensex crossed the 22,000-mark, but then slipped a bit to end the day at 21,934.83 points. The only way to participate is to invest in stock markets, and one way of doing that is through equity mutual funds (MFs). So, does it make sense to invest in equity MFs now?

Fund managers love to tell their investors to invest for the long term. But what is ‘long-term’ really? The fact is that there is no real definition of long term because you can’t guarantee future returns. Looking at past data, though, can give you a good idea as to how long, approximately, should you be invested.

Mint Money ran some numbers to check the chances of making or losing money depending on how long you stay invested. We took Sensex’s daily values since its inception. (We took the Total Return Index, or TRI, values and not the usual Sensex values that you see every day on your television screens. But more of that later.) Assuming you treat the Sensex like an MF scheme (and its daily price like an MF’s net asset value or NAV) and invested in it any time since its inception, what would your returns be? What would your returns have been had you invested for different time periods—of one, two, three, four or more years—from its inception till date? Here’s the story that our numbers tell. 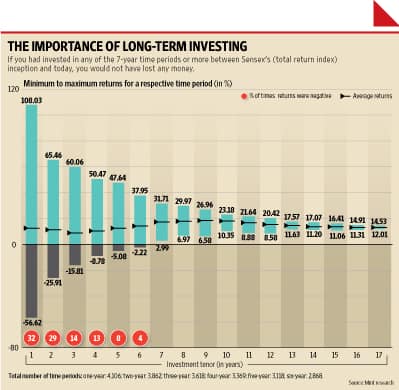 If you had invested for a duration of just one year, any one year, between August 1996 and today, you would have lost money 32% of the times. (Note that Sensex TRI data was available only since August 1996.)

Had you invested in the Sensex for four years, any four-year period between August 1996 and now, you would have lost money just 13% of the times.

Here’s the best part. If you had invested for seven years, any seven-year time period, you wouldn’t have lost any money. In fact, the longer you stayed invested, the better your returns would have turned out (see graph).

Long-term investing has other advantages as well.

“The fact is that over a longer period of time, your investments will be guided by fundamentals. Investments made for a shorter timeframe will be dictated more by sentiments," said Huzaifa Husain, head, equity funds, PineBridge Investments Asset Management Co. (India) Ltd.

As returns increase over time, you are able to beat inflation. In fact, equity investing is necessary because over the long run, that’s the only investment vehicle that helps beat inflation, said Ajit Menon, executive vice-president, head of sales, and co-head of marketing, DSP BlackRock Investment Managers Ltd. “You need to be able to conserve your purchasing power, and so you need to invest in a vehicle that gives returns, over and above your traditional investment avenues like fixed deposits and small saving schemes. When you stretch it over a long term, equity is one asset class that has given returns over inflation, after taxes," said Menon.

No, returns from equity markets are not guaranteed. The purpose of the data is to show the probability or chances of making or losing money. “You should also check the average returns for different time periods. Typically, the average returns go up as your tenor goes up. Then, after a point in time, returns stay at that high level," said Harsha Upadhyaya, chief investment officer, equities, Kotak Mahindra Asset Management Co. Ltd.

Apart from avoiding short-term equity investing, one should not time the market.

In fact, some of the most popular investment decisions were taken by investors at the wrong time.

In 2000, investors who invested in the equity market when the information technology (IT) sector was at a high (CNX IT index returned 296% in the preceding three-year time period), made a mistake. The index went on to lose 15% compounded annualized in the next five years.

In 2003, investors who had avoided the S&P BSE Sensex when it was at the bottom after it had lost 15% in the preceding three-year time period, too, made a mistake. They would have gained 39% in the next five years.

In 2007, investors who had invested in the equity market on the back of the infrastructure sector boom (CNX Infrastructure index had returned 40% in the preceding three-year period) again made a mistake. They went on to lose 4% compounded annualized in the next five years.

All this evidence finally says one thing: invest in equities, and invest for the long-term. Remember: the 7-year threshold was based on past data, but the longer you stay invested, the chances of losing money goes down.