No signs of good days for small- and mid-sized firms

An analysis of firms with revenue below `500 crore shows net sales growth continued to decline, down 5.5% at the end of the September quarter, the worst in two years

The anaemic recovery is taking its biggest toll on the fortunes of smaller firms. A Mint analysis of companies with revenue below ₹ 500 crore shows net sales growth continued to decline, down 5.5% at the end of the September quarter, the worst in two years (see chart 1). 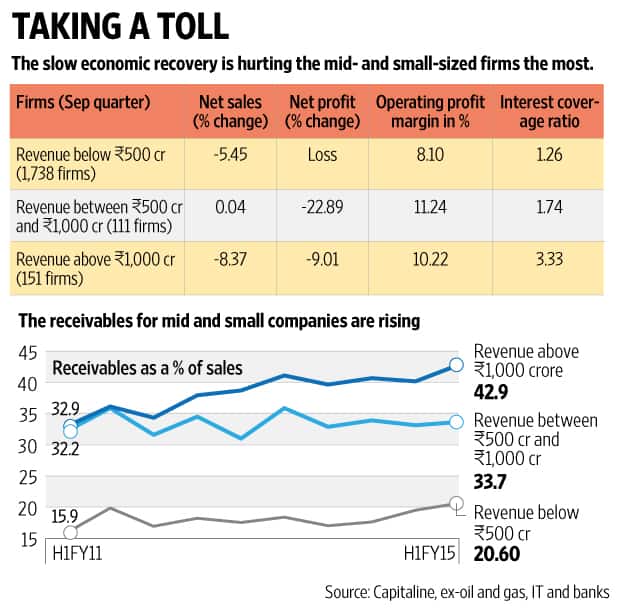 While operating profit improved, thanks to windfall gains from the decline in commodity prices, the profits of these companies in the aggregate continued to shrink. Moreover, the interest coverage ratio, or debt servicing ability, also remained weak at around 1.26.

For these companies, receivables as a percentage of net sales increased to 20.6% for the first half of this fiscal, the highest in five (chart 2). Receivables include all debt owed to the firm and are recorded half yearly on corporate balance sheets.

For mid-sized firms, with revenue between ₹ 500 crore and ₹ 1,000 crore, the story remains the same. Net sales grew the slowest in six years. Operating profits grew at a snail’s pace. Net profits contracted. The interest coverage ratio also remained low at around 1.74. Receivables as a percentage of net sales increased to 33.7%.

“There is an overall slackness in the release of payments from customers from steel and non-ferrous sectors, which are under strain due to a slump in the commodity prices," said M.S. Unnikrishnan, managing director and chief executive officer, Thermax Ltd.

Even for the larger firms, earnings growth remained sluggish. Net sales declined for the fourth consecutive quarter, down 8.4%. Operating profits continued to shrink as well. Receivables as a percentage of net sales were at a five-year high of 42.9%.

“Operating profitability has shown an improvement benefiting from the lower commodity prices. However, given the debt levels, it has been insufficient to meaningfully improve the leverage of large corporates. The median leverage for the top 500 borrowers has improved marginally," said Rakesh Valecha, senior director and head of corporate ratings from India Ratings and Research Pvt. Ltd.

A lot of these pressures get passed on to small- and mid-sized suppliers in the form of higher payables, which is leading to a cash crunch.

“Some of the pressures also build up on account of delays in project and funding approvals, which invariably get passed on to the suppliers through delayed payments. With limited liquidity cushions, the small- to mid-sized companies get impacted severely in their ability to service debt," said Valecha.

As a result, inventory continues to remain elevated, possibly reflective of muted demand conditions. However, part of the stress on receivables could be because of inventory filling ahead of festival season. “Diwali was in the month of November which could have led to inventory filling in October and the payments would have come later," said Suhas Harinarayanan, executive director of institutional equity research at JM Financial Securities Ltd.

Given the high leverage and weak demand, recovery for small and medium companies is unlikely to happen in a hurry. Unless, of course, there is a consumption-led recovery following the implementation of the seventh pay commission award.