The average monthly renewable energy certificates sales on energy exchanges increased from 4,789 units in the first eight months of the previous year to 40,153 units this year

The average monthly REC sales on energy exchanges increased from 4,789 units in the first eight months of the previous calendar year to 40,153 units this year. One REC equals one megawatt hour.

But the demand is barely sufficient. With new solar capacities and the backlog, the REC sale bids are rising dramatically. In the eight months to August this year, RECs offered on the energy exchanges increased almost 10 times from a year ago. As a result, despite a decent improvement in the monthly sale rate, the offtake ratio or the buy quantity as a percentage of offered quantity remains abysmally low—it stood at 1.6% in August. 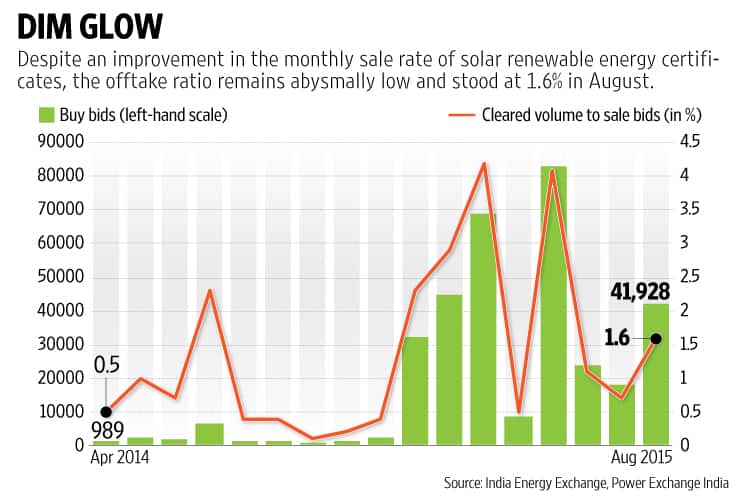 According to industry experts, poor compliance with the solar purchase obligation by the obligated entities, especially the state electricity boards, is leading to this problem. Even though the rules and the mechanism are laid out, implementation is lagging. “Only in few cases, SERCs (state electricity regulatory commissions) have issued stricter directions/penalty to the obligated entities for RPO compliance," Icra Ltd said in a note.

Experts hope the Supreme Court order will nudge the obligated entities to step up REC purchases. If it does not take off in a big way, then the REC market can emerge as a weak link in India’s renewable energy strategy.

Solar energy generators that do not have regulated supply agreements and sell energy in the open market or to a utility will have few means of generating extra revenue or monetizing their green certificates. “In effect, the revenue will be locked. There will be no takers unless a market-oriented framework is developed. It’s not there right now," said a person who tracks the sector.