Little over three years after mutual funds (MFs) started offering direct plans for all schemes, it’s becoming easier for investors to invest in them. Two online portals—Oro Wealth (by Alpha Fintech Pvt. Ltd) and Invezta (by Valuefy Solutions Pvt. Ltd)—are among the newest robo advisors, but also offer direct plans. This is in addition to three other ways in which you can invest in MFs through direct plans—1) a fund house’s website, 2) myCams (the online investment portal of Computer Age Management Services or Cams), and 3) Mutual Funds Utility (MFU) portal, sponsored by the Association of Mutual Funds of India (Amfi).

MFU and myCams also allow investors to invest in schemes that they may have invested in earlier through distributors; in other words, regular plans.

But are direct plans for you? Is a lower expense ratio enough reason? Before we come to that, let’s take a look at what the online platforms have to offer and whether they’re worth it.

Invezta offers 16 fund houses at present, but this will increase over time. Oro Wealth has tied up with MFU so it offers the same number of fund houses as MFU, which is 25 at present.

Both offer lump sum and systematic investment plan (SIP) routes, and advisory services. Once you open an account and sign up, you can set goals and a set of schemes will be recommended accordingly. Your portfolio will be monitored and changes may be suggested from time to time. This is similar to other robo advisory services.

If you choose to go with MFU directly, even then you get 25 fund houses. It allows you to buy and sell mutual fund units, switch between schemes and invest through SIPs. myCams offers 11 fund houses that are available for additional purchases, redemptions and switches, and in five of these you can make fresh purchases and SIPs. 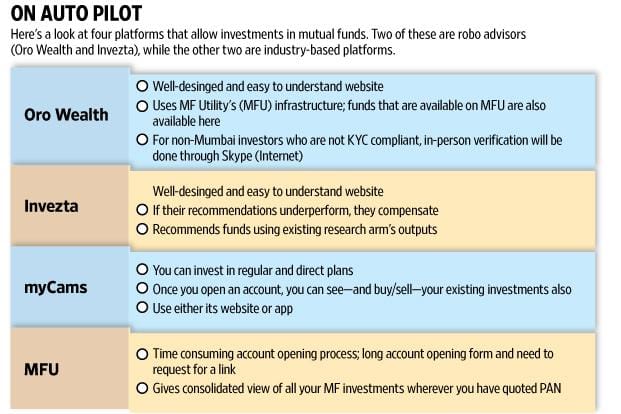 Since the two robo advisors are start-ups, the scale of operations is small. Oro Wealth is based in Mumbai and doesn’t have offices elsewhere yet. If you live outside Mumbai and wish to open an account, it will do the in-person verification over Skype (Internet), if you haven’t completed your know-your-client (KYC) norms. “We have tied up with a parcel service that will pick up your physical documents," said Vijay Krishna Kuppa, co-founder, Oro Wealth.

This author bought a few MF schemes on three of these portals to check ease of operations—two schemes each on Invezta and Oro Wealth, and one each on MFU and myCams. Account opening was a breeze on all. Websites are well designed and enable an investor to narrow down choices. Since myCams and MFU are industry platforms, only Permanent Account Number (PAN) and some other details were needed. All earlier investments could be seen.

There were some problems though. Opening joint accounts was difficult at Oro Wealth and Invezta. “A majority of MF accounts have only one investor. If you wish to add a second and/or third investor, you can do so later," said Kuppa. One can add additional names on the printouts of pre-filled forms (which you need to physically sign and send back to open the account). But this was not known when the author sent his application.

Starting an SIP at Invezta was quicker by a few days than Oro Wealth, since account opening and SIP registration was done at the same time. At Oro Wealth, at the time of initial registration, one can only start with lump sum investments. For SIPs, there is separate registration.

With MFU it is tougher to open an account. The main website (www.mfuindia.com) has no mention of the online facility. For that, one has to go to www.mfuonline.com—and this, too, is not publicly known. When the author called up MFU’s toll-free number, he was asked to send an email request. Once you send an email, the platform’s link is emailed back where you can open an account. Since an account had already been opened with Oro Wealth, there was no need to fill MFU’s lengthy account opening form. Oro Wealth’s account opening form is a fraction of MFU’s though it uses the Amfi platform’s infrastructure.

“MFU has been receiving a lot of backlash from distributors who feel it has been ‘encouraging’ direct plans. To pacify them, MFU has kept the link hidden and only gives it to those who specifically ask," said a distributor who did not wish to be named. MFU officials were unavailable for comment but an industry executive close to the utility said: “When you walk into a bank branch, do you get Internet facility by default? No. You need to ask for it. MFU online investing facility is like that."

What does it cost?

Since MFU is a transaction platform (more of an order routing mechanism than a platform as such) that is sponsored by the MF industry, it’s bound to offer both direct and regular plans. myCams, too, can be considered an industry offering as Cams owns it and services MFs, and offers both types of plans. In other words, MFU and myCams are not distributors and hence don’t charge fees.

On the other hand, Oro Wealth is a distributor and Invezta is a registered investment adviser. Hence, investing in direct plans through them costs. But charges are nominal. Oro Wealth charges a flat fee of 50 per investment, irrespective of invested amount. If you do an SIP, the charge is 25 per month, irrespective of the number and the value of SIPs. If you opt for its wealth advisory services, you pay 40 basis points of your total assets under management (AUM) at the end of every year.

Oro Wealth has a digital wallet service. You need to put money in the digital wallet from your bank account. Transactions will go through only if you have sufficient balance in the e-wallet.

Invezta charges 79 a month, which comes up to 948 a year. If you choose its advisory product, you pay 109 a month or 1,308 a year. First 50,000 worth of transactions are free, after which you will need to buy a package (only annual) by transferring money.

Invezta’s robo advisory comes with an interesting feature. At the end of every quarter, it measures the performance of the schemes that it recommends to you. If they underperform the category average over the past 1-year period, it reimburses you that quarter’s fee. “You won’t get the cash; instead, we will give a credit of another quarter of advisory," said Sharad Singh, co-founder and chief executive officer, Valuefy Solutions.

Is a direct plan for you?

On the face of it, direct plans make sense because they are cheaper. For example, 1 lakh invested in a direct plan with an expense ratio of 1.4% grows to 12.82 lakh over 20 years assuming the fund goes up by 15% on a compounded annualised basis before expenses. In a regular plan with an expense ratio of 2%, the corpus grows to 11.52 lakh—a difference of 1.29 lakh or 11%. Isn’t that tempting? “Direct plans are cost-saving, but if you have an advisory outside to whom you pay fees, you can invest in direct plans and save on the cost here. Or, you can use a robo advisor and invest in direct plans," said Singh.

The reality is that direct plans aren’t meant for everyone. “Whenever I see any comparison of a direct and regular plan, the two plans are of the same scheme. But what happens if you are in the wrong scheme, altogether? If you are in the wrong train, how does it matter whether it goes fast or slow?," said Aashish P. Somaiyaa, managing director and chief executive officer, Motilal Oswal Asset Management Co. Ltd. 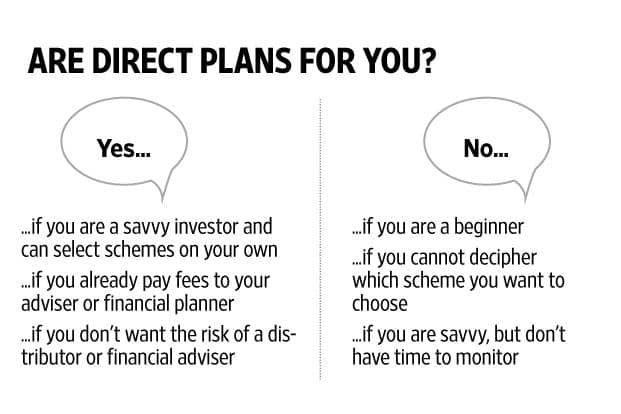 If you are investing in MFs for the first time, or have invested earlier but don’t have the time to keep track, or don’t understand the schemes well, then avoid direct plans. For such investors, it may be better to take the services of a financial adviser, even if it means paying a little more.

For evolved investors though—especially those who have the time to monitor their portfolios—direct plans are a blessing. And this is where direct platforms such as Oro Wealth and Invezta come in handy.