Gold prices might have breached new records repeatedly this year, but the majority of listed jewellery sellers aren’t basking in that shine, barring a few like Titan Industries Ltd.

In India gold demand has held more or less steady or even increased despite an increase in prices over the past few years. At the macro level, this can be seen from the increase in household savings in physical assets by one-fifth to ₹ 9.8 trillion in fiscal 2011. Recent brokerage reports have pointed out that this trend has held true for the past four years.

But the tide is turning as the government hiked the import duty on the metal in the national budget early this year. Imports fell 56% from a year ago, according to Bloomberg. World Gold Council data shows a 30% decline in jewellery demand in India in the June quarter. 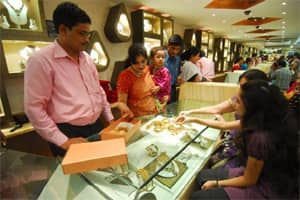 These numbers are reflected in the income statements of local jewellery sellers in the past couple of quarters, even if falling volumes are compensated by rising prices.

For a set of 32 jewellery selling firms sourced from the Capitaline database, net sales growth in the June quarter was 16%, the lowest in at least five quarters barring March, when it was worse at 11%. The increase in gold prices has meant not only a dip in volumes, but it is also leading to rising working capital costs for firm.

Operating margins have declined to 3.76% compared with 4.14% a year ago. This set of firms also saw their net profits decline by 2.65%, the first such dip in at least five quarters.

Some bigger firms are trying to focus on alternatives such as diamond-studded jewellery in a bid to drive volumes. But with gold prices likely to remain firm or even improve on expectations of a fresh wave of liquidity, even the festival and wedding season purchases are unlikely to do much to improve these numbers. No wonder then, barring Titan, most of the bigger firms in this industry have underperformed the BSE-500 index on the Bombay Stock Exchange since January.