Analysts said the markets will seek near-term cues now from the implementation of the goods and services tax (GST) and the progress of monsoon rains. With stock valuations still at elevated levels, there are also concerns whether domestic fund flows alone will be enough to sustain the next leg of the rally.

On Wednesday, the US central bank raised the benchmark lending rate by 25 basis points and said it would begin cutting its huge holdings of bonds and other securities this year. One basis point is one hundredth of a percentage point. 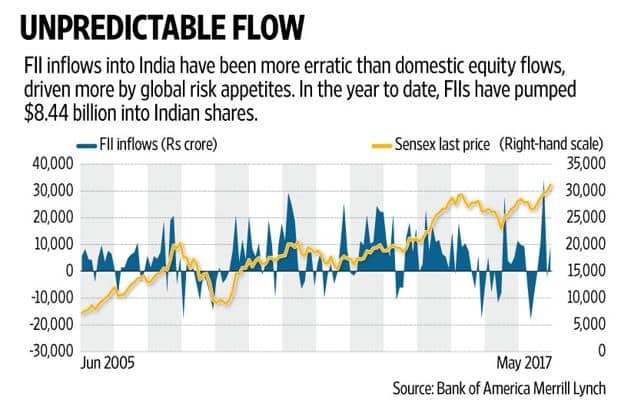 The Washington Post reported that US President Donald Trump is being investigated by a special counsel for possible obstruction of justice, adding to the nervousness of investors.

“I do not see FII (foreign institutional investor) flows into India receding. With the economy growing, the rupee being stable and US bonds at around 2%, I don’t think that is going to be the case," said Nirav Sheth, head of equities at SBICAP Securities Ltd.

In the year to date, FIIs have pumped $8.44 billion, or around Rs54,200 crore, into Indian shares. Domestic institutional investors (DIIs) have invested a net of Rs16,403.48 crore in the same period.

While DII investments have been more consistent in recent times, and many argue that their contribution will keep rising due to increasing participation of retail investors, they are still much lower than foreign fund inflows.

In a 14 June note, Bank of America Merrill Lynch said that fund flows were a weak argument for a further rally in the markets, citing three factors. One, rising markets do not always attract inflows. Two, a portion of these fund flows could go into new issues, and three, real (inflation-adjusted) rates have turned positive, increasing the relative attractiveness of debt returns.

“While it may seem unassailable now, the incoming tide of domestic liquidity can reverse," wrote Bank of America Merrill Lynch analysts Sanjay Mookim and Nafeesa Gupta. “Flows are not sufficient reason to add risk at elevated valuations."

The Sensex trades at 18.93 times expected year-ahead earnings, compared with its five-year average of 14.94 times. It trades at a premium of 48.57% to the MSCI emerging markets index, which trades at 12.16 times.

The valuation seems to be bothering analysts as well.

“With economic growth grinding to a 10-quarter low in 4QFY17 and with earnings recovery nowhere in sight, “hope" is the only factor supporting the current giddy levels of valuation prevalent in India," Ambit Capital Pvt. Ltd said in a note on Thursday. In the March quarter, while Indian companies reported a pickup in sales, rising material costs crimped their profit growth.

Meanwhile, a slide in crude oil prices, triggered by a build-up in gasoline stocks, added to market woes on Thursday.

In India, the BSE Oil & Gas index shed 1.15% and was the worst performer among sectoral indices on Thursday.