Why are the markets cheering Donald Trump?

Trump's much-awaited massive push to building US infrastructure will boost the country's growth, which in turn will help emerging markets as well

One would have expected that, given that Donald Trump has spent the first week of his presidency doing exactly what most level-headed people feared he would do, emerging markets would plunge in fear of what is to come.

After all, Trump has unambiguously signalled his protectionist bent and seems intent on rolling back decades of globalization, the same globalization that has immensely benefited many emerging economies. And that’s not to speak of the geopolitical fights he is picking, all of which will make the world even more unsafe than what it is at present.

Yet, the markets have blithely shrugged off all these concerns and the MSCI Emerging Markets (EM) index has surged more than 6% in 2017. The strong dollar and higher US yields have also been pooh-poohed. Where are they seeing grounds for optimism? Some investors were hoping Trump would dilute his more extreme positions, but that pious hope doesn’t seem to be borne out by the new president’s actions so far. 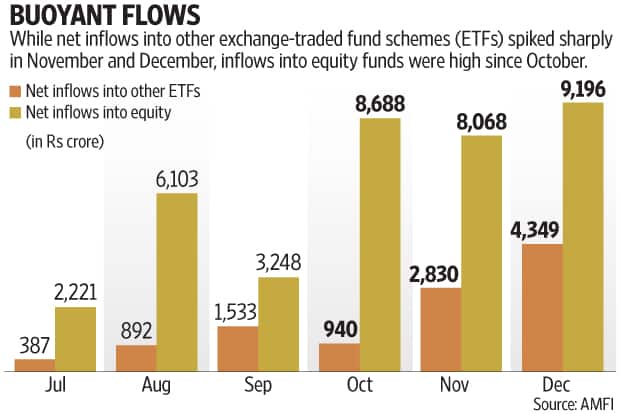 The rebound in the Indian market could be laid at the door of the coming budget and hopes of tax cuts and more spending on infrastructure. Analysts have pointed to large inflows into mutual funds and exchange-traded funds. The accompanying chart shows sharp increases in inflows into these investment avenues in the past few months.

Some analysts believe the money deposited in banks as a result of demonetisation is finding its way into the equity markets. The rise in ETF flows seems to bear out that thesis and, of course, a part of this may be invested directly in stocks.

But while that is a plausible story, the fact is that the rise in equity prices is not India-centric—the MSCI World index is up 2.98% this year, while MSCI Emerging Markets is up 6.22%. Even MSCI China is up 6.87%, higher than MSCI India’s 5.17% rise this year, despite Trump behaving like a bull in a China shop.

True, Trump’s much-awaited massive push to building US infrastructure has led to US equities climbing new highs and, if it’s actually carried out, it will boost US growth, which will help emerging markets. Also, this month’s flash purchasing managers’ index (PMI) survey readings for the US service and manufacturing sectors show the economy is in fine fettle. The euro zone January flash PMI shows jobs growth at a nine-year high and Japanese manufacturers have reported the best start to the year since 2014. The global economy seems to be looking up.

That improvement is also seen in world merchandise trade volume, as seen from the CPB World Trade Monitor for November. The data show the seasonally adjusted volume of world trade went up 2.7% in November from a year ago. Emerging economies’ exports volume rose 5.4% last November. So, there does seem to be some fundamental basis to the optimism.

The markets are betting that the push to growth given by a recovering global economy and by Trump’s infrastructure spending will outweigh the drag created by new protectionist policies and by the geopolitical uncertainties. No doubt global liquidity, still abundant, has also fuelled the optimism. It’s a very bold bet the markets are making, not just because of the havoc the policies associated with Trump may cause if they spin out of control, but also because a fiscal push will lead to the end of the ultra-low interest rate regime in the US. Given the huge uncertainties, perhaps the markets are getting too complacent.