Mumbai: Prices of Brent crude oil, the global benchmark, fell 15% to $72.83 a barrel on Friday from its recent high of $85.83 per barrel. The decline has led to a rebound in domestic stock markets. Investors are hoping lower oil prices will benefit the country’s current account deficit (CAD), ease pressure on the rupee and spur a return of FPI inflows.

The rupee has clawed back some of its losses and bond prices have rallied as lower oil prices should mean lower inflation. Add to that a glimmer of hope that a US-China trade deal may finally be in the offing and the question that arises is: Is the correction in stock prices over? 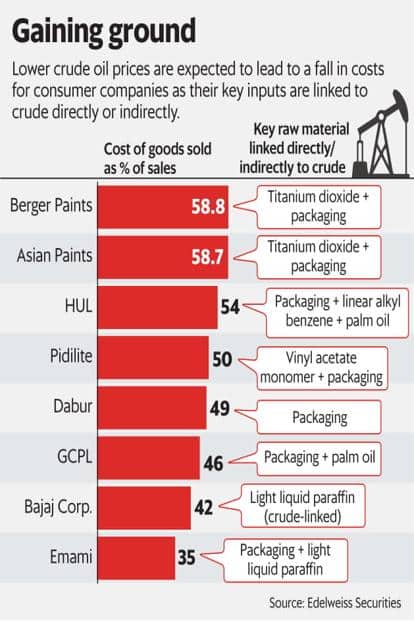 Much depends, of course, on whether crude oil prices remain at their current levels. “It is too early to say if oil prices will correct further," says Anubhuti Sahay, senior economist at Standard Chartered Bank.

To be sure, there are concerns on demand. The International Energy Agency in its Oil Market Report on 12 October reduced its forecast for global oil demand growth in 2018 and 2019 by 110,000 barrels per day to 1.3 million barrels per day (mb/d) and 1.4 mb/d, respectively.

The agency added that was due to a weaker economic outlook, trade concerns, higher oil prices and a revision to Chinese data.

Additionally, comments from Saudi Arabia that it could produce more crude oil if needed were responsible to break the crude oil price rally in the recent past.

“If we look at the inventory data from the US, it seems to suggest that supply shouldn’t be a concern," says Upasna Bhardwaj, economist at Kotak Mahindra Bank.

“Secondly, it looks like some leeway will be provided and the curbs by the US on Iran would not come down to zero at least immediately."

These factors could well keep a check on a sharp rise in oil prices in the near future. The impact of the Iran sanctions on oil markets needs to be monitored closely. The US has agreed to let eight countries—including Japan, India and South Korea—keep buying Iranian oil after it reimposes sanctions on the Opec oil producer on 5 November, according to a Bloomberg report, which cited a senior administration official.

The names of the eight countries getting the waivers is expected to be formally announced on Monday. The terms of these waivers would be critical, said analysts.

However, Bhardwaj points out that “CAD is not just a function of how oil prices move. For macros to significantly improve, non-oil imports have to come down as well. For now, the correction in oil prices can at best be seen as a temporary relief".

“As for inflation and CAD, if oil prices sustain at $75 a barrel, the increase in inflation would be gradual; also we don’t see CAD worsening from 3% of the GDP," says Sahay.

At the corporate level, easing crude oil prices would benefit the operating profit margins of companies in a variety of sectors including manufacturers of tiles, plywood, paints and adhesives, lubricant makers and oil marketing companies. Most of the raw materials used by these companies are derivatives of crude.

“For most of the consumer companies, packaging cost (15% of raw material) is linked to crude inputs," said a note from Edelweiss Securities Ltd on 2 November.

The current decline in crude prices will also offer relief to aviation companies, as their profits have eroded massively in recent quarters due to higher fuel costs.

However, expecting the financial health of airlines to improve meaningfully at this level of crude prices would be foolhardy.

Of course, concerns over the US Federal Reserve’s monetary tightening and over global trade continue. But for India, lower crude oil prices are crucial for macroeconomic stability.