Thanks for Visiting Mint
You seem to have an Ad Blocker on. Please turn it off in order to continue, or whitelist Mint
HOW TO TURN OFF AD BLOCKER
OR
REFRESH IF YOU ALREADY TURNED OFF THE AD BLOCKER
Home >Market >Stock-market-news >Sensex, Nifty tumble; rupee sinks to 2-year low

Mumbai: Benchmark equity indices tumbled and the rupee fell to a two-year low on Friday in an emerging market rout fuelled by the weakest Chinese manufacturing data since the global financial crisis. 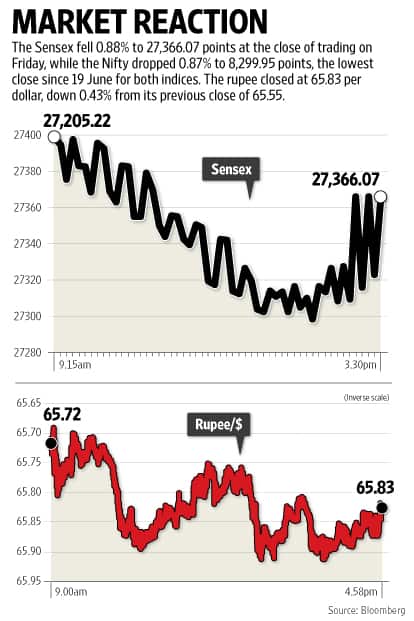 Indian and other emerging markets are feeling the heat from international concerns over China’s slowing economic growth, falling exports and the shock devaluation of the yuan last week, analysts said.

The concerns were fuelled on Friday by data showing that a key measure of manufacturing in China fell to the lowest in more than six years in August, suggesting that the economy will need further policy support to stem a deepening slowdown.

“It is primarily...global markets weighing the domestic market down. There are a cluster of issues such as China worries, Fed (US Federal Reserve) minutes, the situation in other emerging markets in light of the commodity rout that are bothering (investors)," said Gautam Chhaochharia, head of research at UBS Securities India Pvt. Ltd.

“Locally, the concern is that the economic growth recovery is slower than expected. That remains an area of disappointment for us," he added.

Earlier this week, international credit assessor Moody’s Investors Service forecast that India’s growth would slow to 7% in the year to next March from 7.3% in the previous year because of below-normal monsoon rainfall.

“Depreciation of currency is getting to be threatening as well," he said.

Dollar sales by state-owned banks, likely on behalf of the Reserve Bank of India, helped the rupee recover from its day’s low of 65.91 per dollar, dealers said.

Foreign institutional investors are net buyers of Indian shares to the tune of $13.3 billion (around ₹ 87,515 crore today) for the year to date, but have been net sellers in May, June and so far in August as well.

Domestic institutional investors have been net buyers of local shares for all months this year except January. So far in 2015, they have pumped ₹ 29,788.74 crore into equities.

Emerging market stocks completed their worst week in two years on Friday. More than $3.3 trillion has been erased from the value of global equities after China’s decision to devalue its currency last week spurred a wave of selling across emerging markets.

European shares headed for a correction; equities in Hong Kong, Indonesia and Taiwan entered bear markets, and junk bond yields globally rose to the highest since October 2012. Oil was set for its longest weekly losing streak since 1986 and copper extended a rout that has sent it to the lowest price in more than six years. Copper slid 1.2%, while the yen strengthened for a third day against the dollar.

“This week’s sell-off started from the yuan’s devaluation, which generated speculation about the true state of China’s economy," Hertta Alava, who helps oversee the equivalent of $395 million as the head of emerging markets at FIM Asset Management Ltd in Helsinki, said by email. “China’s PMI (Purchasing Managers’ Index) was weak, so it is just adding fuel to this negativity."