Last year, it was China’s overheating equities market that caused grief to investors. Now, it’s China’s commodity futures market that is on fire, pulling up commodity shares in its wake. The government’s clampdown on runaway equities and worsening economic conditions saw the Shanghai Composite Index decline by 41% over its high levels of June 2015. A similar exercise has commenced in the commodity futures markets too.

Such events in faraway lands have strong local effects. In India, say metals and a despairing picture materializes. Tata Steel Ltd is in a hurry to exit its loss-making UK steel business. At home, metal companies have been hurt by falling realizations and rising interest costs. They have become a big worry for lenders, especially the steel companies. But the markets are singing a different tune; the S&P BSE Metal index is up by 21% since 12 February, even after declining by 4.5% since the start of this week. 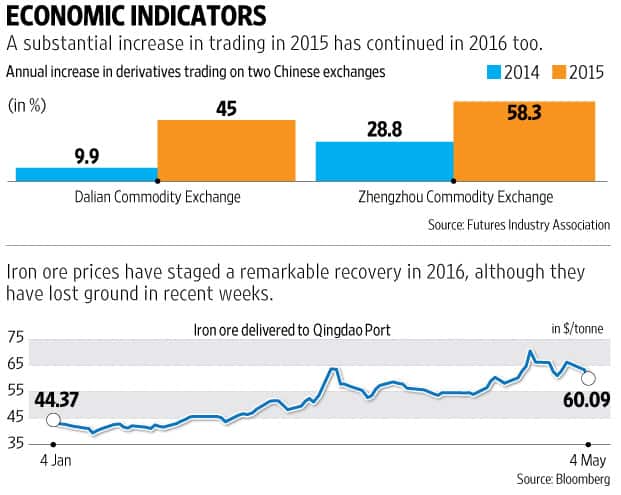 Blame China’s futures markets. Recently, its commodity exchanges moved to cool down speculation by increasing transaction fees and imposing higher margins. That is working. Trading volumes across the country’s three biggest exchanges are more than half of what they were at their peak on 22 April, according to a 5 May Bloomberg report. Traders typically held positions for a few hours, cashing out by the end of the day, according to the report. Open interest (outstanding contracts at end of the day) remained relatively unchanged during this period of runaway trading.

The increase in commodity futures trading was evident in 2015 too. The “other" category in global futures and options trades in 2015 rose by 132%, according to the Futures Industry Association (FIA), mainly due to what it calls innovation in Asia. China has introduced futures based on industrial commodities such as chemicals and iron ore that have attracted large volumes. FIA thinks this is a broader trend because the Chinese authorities are willing to let exchanges introduce new contracts and the development of China’s industrial sector leads to ready market for such contracts.

Thus, the current clampdown may cool things down a bit but chances are China’s influence in the commodity futures segment will keep on increasing. Another factor has helped. A dovish stance by the US Federal Reserve in 2016 has seen the dollar weaken and liquidity has gone back to other commodities. This is especially visible in the rising price of gold in 2016.

How does all this affect Indian companies? At this point, they are lapping up higher prices with glee. Rising futures prices ultimately reflect in their realizations. Even after the recent decline, China’s imported spot iron ore price is up 35% since early January, while its domestic hot rolled coils are up by 42%. Among non-ferrous metals, copper is up by 5.8%, zinc by 21% and aluminium by 10% on the London Metal Exchange. Higher prices should lead to more profits and cash flows to service debt.

That’s the optimistic view. But remember the underlying global economic conditions that led to a weak outlook for commodities remain. Also, higher prices could see buyers go slow on purchases, especially if their customers refuse to pay up. That could lead to more supply putting pressure on prices. Similarly, a sharp increase in prices could see temporarily shut capacity spring back to life leading to more supply.

Since financial derivatives appear to be the main reason behind rising metal prices, China’s tightening could cause a sharp decline instead of a soft landing. Similarly, a change in the US Fed’s dovish stance is a major risk. These will play out over the course of 2016. For now, prices are favourable for metal companies.