Are lights increasing your electricity bill?

Here's how to choose efficient bulbs

How often does your electricity bill shock you? Do you wonder how your bill is so high even when you don’t use high-consumption appliances much? Ever given a thought to light bulbs and fixtures? No? Well, you should, because these can form as much as 25-30% of your monthly electricity bill. Reason enough to pay close attention to the type of light bulbs you use, and whether it’s time to change them.

When you do the math, it’s difficult to calculate both the cost efficiency and energy of light bulbs. Mint Money takes a look at different types of bulbs used and their efficiency.

Here are two terms we must understand before we move any further: wattage and lumens. Wattage measures the amount of electrical power a light bulb consumes. Watt is a measure of power or energy. Lumen is a measure of brightness, i.e. the amount of light the bulb will provide. Keep both in mind when purchasing a light bulb. A higher wattage doesn’t mean higher lumens; but higher the lumens per watt, the brighter is the bulb.

Incandescent light: These are the most commonly used form of lighting; basically your normal bulbs. These create light by running electricity through a filament, which heats up and then glows white-hot.

This is an inefficient way of creating light as 90% of the electricity used is turned into heat and only 10% is turned into light. On top of that, they produce only between 10 and 30 lumen per watt.

Fluorescent tube: These are basically the white tube lights we all know well. The tube is gas filled, which produce short-wave ultraviolet (UV) light. When the phosphorous coating on the inside of the tube comes in contact with the UV light, it glows. A fluorescent tube or bulb can produce 50-100 lumens per watt.

Compact fluorescent lights (CFL): These use gas, mercury particles and phosphor to create light. Most CFLs have a charge-up time, and also need more watts to light up. This makes them unsuitable for areas where fast switching is needed and where lights are frequently switched on and off. CFLs take 30-45 seconds to reach full light output from cold start, and produce 40-70 lumens per watt.

Light emitting diode (LED): These lights and tubes use diodes instead of gas or heated filaments to produce light making them the most energy efficient lighting option available. They produce 40-80 lumens per watt. LED lights are usually the brightest and come in most number of colours. 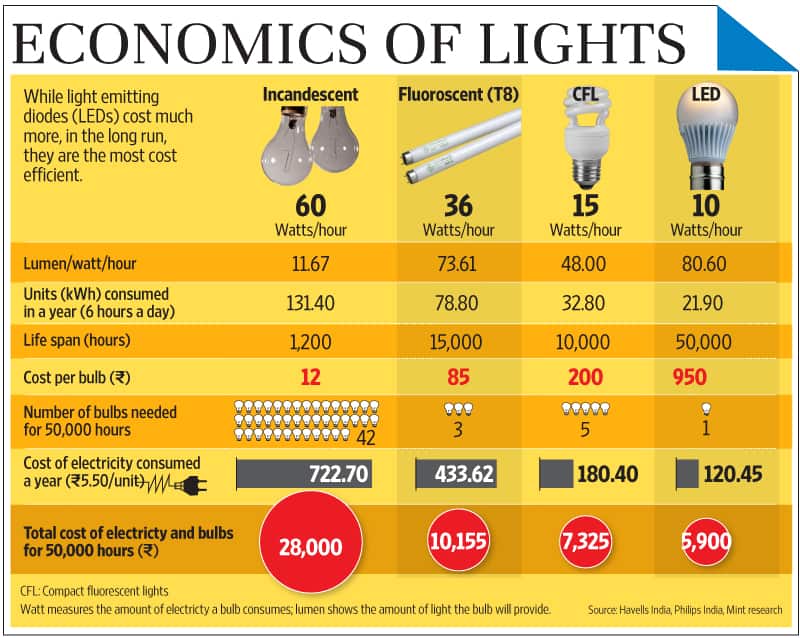 What to look for

“A correct lighting solution should consume minimum power and give out better light, i.e. the lamp should be designed to offer higher lumen output while consuming less power," said Sumit Joshi, head-marketing, Philips India Ltd. Here are the factors to consider.

Price of bulb: LED is the most expensive while an incandescent bulb is the cheapest. Without taking into account the cost of the fixtures, an LED bulb (18 watts) can cost as much as 950, a CFL of 23 watts 200, a fluorescent tube of 36 watt around 85 (there are also LED versions that cost much more, at least 500), while a 100 watt incandescent bulb costs around 12.

“LED costs the most because of the technology used. If you add the cost of the fixtures, LED would be costlier," said Anil Bhasin, senior vice-president, Havells India Ltd.

Energy efficiency: “LEDs come with a life term of 10-15 years (depending on the number of hours of usage per day); consume up to 50% less power than CFLs and 80% lesser than incandescent. Thus the savings in the electricity bills and operational costs result in a quick payback of the comparatively higher product price," said Joshi.

“Your actual savings on a monthly basis by using LED lights might be in paises, but a turnaround time analysis will show that you are more likely to make up the capital cost only with an LED. They more than make up in terms of longevity," said Rajiv Bhakat, partner, Studio Code, a Delhi-based architecture firm.

Another advantage is that “you will not have to replace them frequently", said Bhakat.

Don’t just buy any type of bulb because it is cheap. A cheap bulb usually has to be replaced often, consumes more electricity and produces a lot of heat, which could weigh on your power bill.

LEDs last longer but cost much more, and are therefore suitable if you plan to stay in that house for long. “If you plan to rent it out, or sell it soon, or not stay in it for long, it is better to opt for CFL or even fluorescent bulbs and tubes. If you plan on using LED lights, make sure you will be staying in the house for at least 8-10 years because that is how long it takes to recover the capital," said Bhakat.

Also, look at how much light you need in a particular room. “Think about how much light you need in the particular area and then the application of the bulb. What is it being used for—to study or in the kitchen, or for some other purpose. You should consider factors such as energy efficiency, brightness offered, durability, maintenance required and style options," said Bhasin.

LEDs can be used for rooms such as living rooms, and as spot lights for picture frames and so on.

Bhakat suggests that in rooms that are not used frequently, such as a store room, CFL bulbs or fluorescent tubes can be used instead of LEDs. In high-use areas such as a kitchen, you can again use fluorescent tubes or CFLs. If you are worried about aesthetics, use CFLs as they come in different shapes and wattages.

Incandescent bulbs might be the cheapest but are also highly energy inefficient. It is best to do away with them completely.