UPL Ltd’s March quarter was saved by its Latin American business. A product against Asian rust disease on soya performed well. Even though subdued crop prices hit business in Brazil, Mexico boosted the overall regional revenue growth to 29% from a year ago. It is also pertinent to point out that this growth came on a favourable base since revenue was flat in the March 2014 quarter.

In any case, this made up for disappointments in India, Europe and North America, which collectively generate half of the company’s revenues. Revenue from Europe fell 10% because of currency devaluation and export ban in Russia, leading to pricing pressures.

Revenue growth in India dropped from 31% a year ago to 6% as unseasonal rain impacted sales. Similarly, growth in North America slowed to 9%. As a result, UPL’s consolidated revenue growth decelerated from 19% to 9% in the March quarter. 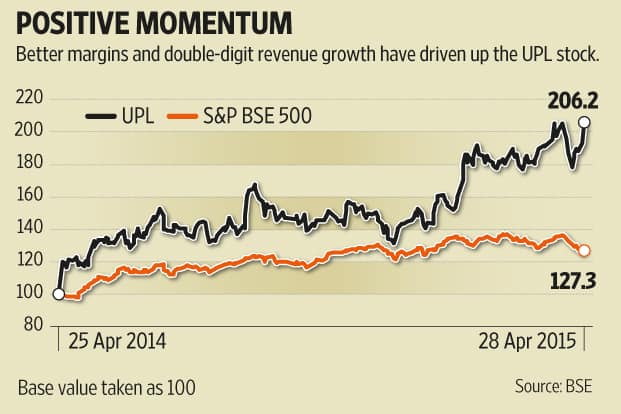 Nevertheless, sales quality is encouraging. Volume grew 18%. As raw material costs softened, margins also expanded. With commodity prices remaining weak and high-cost inventories getting cleared, margins are expected to expand further. These expectations have led to upgrades in earnings per share (EPS) estimates by brokerage firms. Emkay Global Financial Services Ltd, for instance, has increased its fiscal year 2016 EPS estimate by 8% and those for the next fiscal year by 5%, primarily owing to margin expansion.

But margins alone are unlikely to excite investors, who have driven up the stock 90% over the past year. UPL’s annual revenue growth, on the other hand, has slowed from 20% two years ago to 17% in 2013-14 and further to 12% in the last fiscal year. The company has set an ambitious target of doubling its sales in four years to $4 billion, or ₹ 25,400 crore. That implies an average annual growth of 19% over the next four years, which seems a tall order.

Subdued crop prices, geopolitical tensions and regulatory challenges in several markets, which were responsible for falling sales growth in the first place, still persist. In India, the prospects of a below-normal monsoon could hit sales in the current fiscal year. Analysts peg the achievable revenue growth rate this year at 12-15%, which is also what the management has guided for. Perhaps, it may acquire a firm.

UPL also aims to tap new regions—China and Africa. It plans to introduce products that have a market size of $5 billion. While management commentary on business prospects is encouraging, it is critical that the company maintains the double-digit revenue growth rates to escape investor wrath.