Price controls are fraught with dangerous consequences, no matter how noble the intent

Inflation, monetarists claim, is a monetary phenomenon as long as supply-side shocks are not there. That is like claiming to have the spouse’s permission to say that one is the boss of the house.

Supply-side changes happen slowly and are greatly influenced by micro rigidities in that particular industry or segment. One such micro rigidity is regulatory control of prices. In the face of high inflation, the government tries to moderate it by controlling prices. Such control of prices looks like the right thing to do, but in fact it is exactly the wrong thing to do.

Comparing industries that are price regulated, such as electricity and railways, with those that are not, such as telecommunications and aviation, throws up interesting data. (I have purposely ignored the recent aviation policy, which is trying to regulate some aspects of airline pricing.) Over the past nine years, revenue realised by railways for carrying 1 person for 1 km has increased from 27 paise to 40 paise—a rise totalling 48%. If we use the same metric for Jet Airways (India) Ltd’s domestic business (as a proxy for airline industry), we see a fall in cost of 9%, from 5 to 4.54. 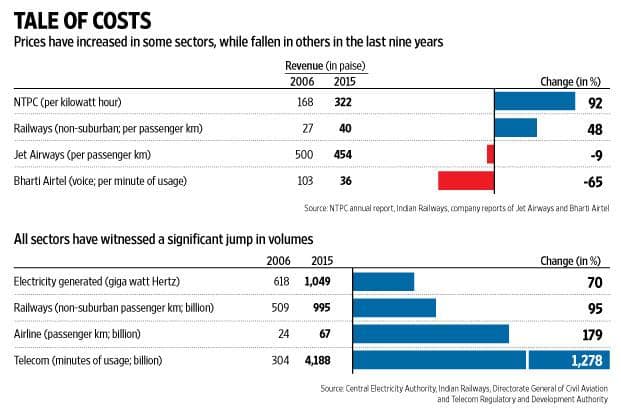 Looking at the increase in ‘quantum of supply’ of these services, one notes that while the number of passenger kilometers of railways has nearly doubled, the number of domestic passenger kilometers flown by all airlines has tripled. The overall electricity produced in the country has gone up by 70%, while overall minutes of usage in telecommunications have gone up nearly 13-fold. (Production, here, is taken as a proxy for capacity.)

Not only have the ‘unregulated price’ industries seen a price fall but they have also witnessed an increase in supply. On the other hand, the ‘regulated price’ industries have seen price rise and a slower increase in supply. It is not uncommon to be able to buy a last-minute confirmed ticket on an airline; but the same is nearly impossible on a train. Our telecom services are fairly reliable but one cannot say that of our electricity services.

We have taken large industries as examples and demonstrated that not only does price regulation not control prices but, surprisingly, it does not seem to motivate companies enough to invest—as evidenced by the slower increase in their supply of services.

Price controls are therefore fraught with dangerous consequences, no matter how noble the intent. Take drug pricing control for essential medicines. It is designed to make health care affordable. By controlling prices, it is in fact dissuading pharmaceutical companies to invest in research and produce drugs that will help control diseases prevalent in India. Is it any surprise that nearly all medicines we consume today are invented outside India? But then, one would argue, what about affordability? With technology, affordability can be targeted by the government, giving direct subsidies to the needy. It may be more difficult to do so, but is definitely the right approach.

Another is ‘surge pricing’ being capped for taxi operators. It is generally believed by the government or regulators that supply is ‘infinite’ and is ‘unresponsive to pricing’.

They believe, when they regulate prices, the same ‘quantity’ of products or services are available. Anyone who has tried to find a cab in bad weather will testify against that.

The reason these decisions are probably taken is because the true beneficiary of free pricing is ‘not present’ to argue his case.