Growth momentum of private life insurers slows down in November

Across the year, growth rate moderated between April and July but picked pace in later months. November, however, reported softer individual APE.

Individual annual premium equivalent (APE), a measure used to calculate sales by insurance companies, of private life insurers was down 1% in November compared to the same period last year, according to a report titled Insurance: Facing the Heat by Kotak Institutional Equities. However, the past three months recorded a 17-19% growth in the sector.

APE is estimated by taking into account the annualised regular premium plus 10% of the first single premium offered in a given period, including top-up premiums. It is a method used to calculate the business of a company when its sales contains both single and regular premium products.

Across the year, growth rate moderated between April and July but picked pace in later months. November, however, reported softer individual APE.

HDFC Standard Life Insurance Co. Ltd reported an annual growth of 37% in October from the previous year. In November, however, it reported a decline of 20%. The company witnessed a slump in ticket size in individual non-single business by 24%, indicating a slowdown in Ulips, said the report. “This is a common evolution trend. Generally, during the early years of market development, insurers focus on investment oriented products. Thereafter the emphasis grows on protection products. The protection gap in India is very large, and sustained focus is required to fill it," said Abhishek Bondia, principal officer and managing director, SecureNow.in.

Outliers Aditya Birla Sun Life Insurance Co. Ltd and Tata AIA Life Insurance Co. Ltd reported positive growth even in November. Birla Sun Life reported 55% growth in individual APE and also saw a 41% annual rise in ticket size in November and Tata AIA was up 59% but reported a dip in ticket size by 7%. The report said there is no clear reason for this divergence. 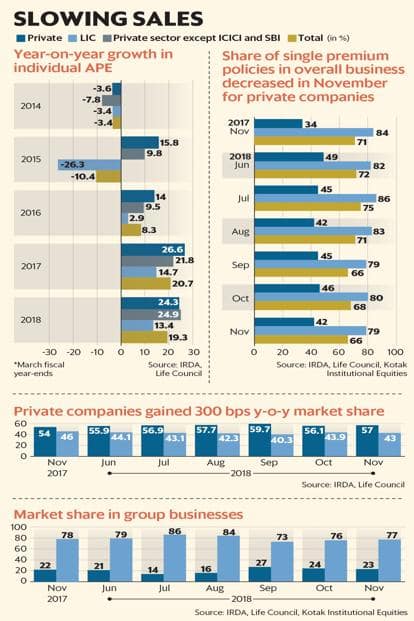 In group business, the share of private companies marginally increased to 23% in November from 22% last year, led by HDFC Standard Life and SBI Life. On the other hand, Life Insurance Corp. of India’s market share dropped to 77% but the company remained focused on single-premium policies which made for nearly 80% of its total premium in November this year.

Overall, private companies gained individual APE market share by 300 basis points to 57% in November from last year. “Private sector insurers have been steadily increasing their market share. They do considerably well in niche segments. For example, private insurers have a large share of protection plans sold through NBFCs," said Bondia.