Bank of Baroda’s nightmarish quarter could be its worst

Public sector banks have had a nightmare of a quarter and Mumbai-headquartered Bank of Baroda (BoB) was no different. The third largest public sector lender reported a nasty loss of Rs3,102 crore for the fourth quarter of fiscal year 2018, far higher than the most pessimistic expectation of analysts.

The reasons were obvious—Bank of Baroda had to provide not only for fresh bad loans but also for those disguised as standard because of the Reserve Bank of India’s forbearance that came to an end in February.

If the pain of asset quality was not enough, Bank of Baroda also had deep wounds on its bond portfolio that required provisioning. 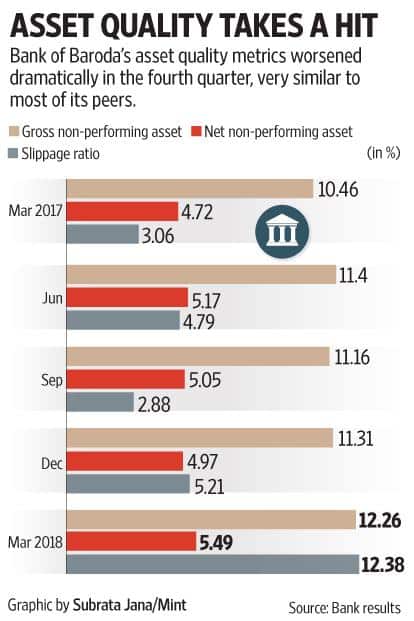 The lender saw half of its fresh slippages emerge due to the end of forbearance by the RBI. Slippages added up to a massive Rs12,569 crore, taking the slippage ratio to 12.38% from just 3.06% a year ago.

At this level, Bank of Baroda has just managed to stay away from the prompt corrective action threshold.

Thankfully, unlike some of its peers, the lender’s capital adequacy ratio is well above the regulatory minimum. The credit, of course, goes to the government’s capital infusion during the year.

The deteriorating asset quality also took a toll on the lender’s core income which grew by just 12%.

Can the lender say the worst is over?

Bank of Baroda has an exposure of Rs10,988 crore towards accounts referred under the Insolvency and Bankruptcy Code. The provisioning done by it is around 50% for these accounts.

A lot of its recoveries depend on how the IBC cases are resolved.

To its credit, the lender has ensured that future stress is reduced, by lending to corporate borrowers with a rating above A.

Its loan growth has also been better than expected at 12% but is driven mainly by retail. Notwithstanding the eye-popping 42% growth in retail loans, such loans don’t even form a quarter of the loan book.

While its recoveries and upgrades are pitiful, the lender expects this would change once insolvency cases find closure.

Meanwhile, it would do well to continue to provide for all toxic loans. Its provision coverage ratio stands at 58% and needs to be beefed up.

The comfort of investors is evident as the stock has shed only 1.8% in the last three months. The optimism may not be misplaced.