But the fact that clear details of the two entities that are being merged hadn’t been made available for such a long gap after the board’s approval of the merger ratio reflects poor transparency.

DLF had stated late on Tuesday that it would merge the promoter’s company Caraf Builders and Constructions Pvt. Ltd which owns DLF Assets Ltd (DAL) with its wholly-owned subsidiary DLF Cyber City Developers Ltd. Both these entities house corporate properties that yield lease rentals and the idea was to bring them under one roof. The management announced that after merger, DLF would hold a 60% stake in the merged entity while the balance will be held by the promoter group. 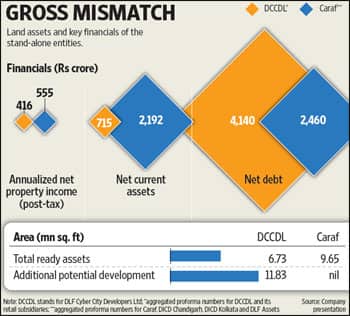 For instance, details such as the cap rate used to value the properties of Caraf and Cyber City are not shown in the presentation. Besides, it’s not clear what will happen to the receivables DAL owes to DLF. The conference call didn’t seem to throw much light on this. DAL still owes about Rs2,800 crore to DLF. To a question regarding absolute numbers on valuation of the deal, the company said, “Our advisors have given the valuation in a ratio and the transaction has been okayed in principle." It seems it will take time before further details are available.

Analysts have been forced to put together numbers based on historic information available to arrive at an approximate valuation of the leased assets as well as any property in the entities involved. Another issue that needs clarity is the treatment of Rs2,725 crore worth compulsory convertible preference shares (CCPS) in DAL which is held by investors (SC Asia). According to a report by Credit Suisse, “the CCPS can be converted into 9.71-10 equity shares of DAL from 24 May 2011 to 24 April 2012".

As IIFL Cap put it in a note to clients on Thursday morning, the DLF-DAL integration raises more questions than answers.