Thanks for Visiting Mint
You seem to have an Ad Blocker on. Please turn it off in order to continue, or whitelist Mint
HOW TO TURN OFF AD BLOCKER
OR
REFRESH IF YOU ALREADY TURNED OFF THE AD BLOCKER
Home >Market >Stock-market-news >Bank NPAs: India worst in Asia by far

Bank non-performing loans (NPLs) in India as a percentage of gross loans are far above the levels seen in other Asian economies, shows IMF data

Comparisons can be good and bad. India’s growth track record when pitted against the rest of the world and even the rest of Asia looks great. But there are other indicators where India comes up short. Banks’ bad loans is one of these indicators.

The regional economic outlook for Asia, released by the International Monetary Fund (IMF) on Tuesday, shows that bank non-performing loans (NPLs) as a percentage of gross loans are far above the levels seen in other Asian economies. The divergence may only widen as end-of-year data for the Indian banking sector emerges. 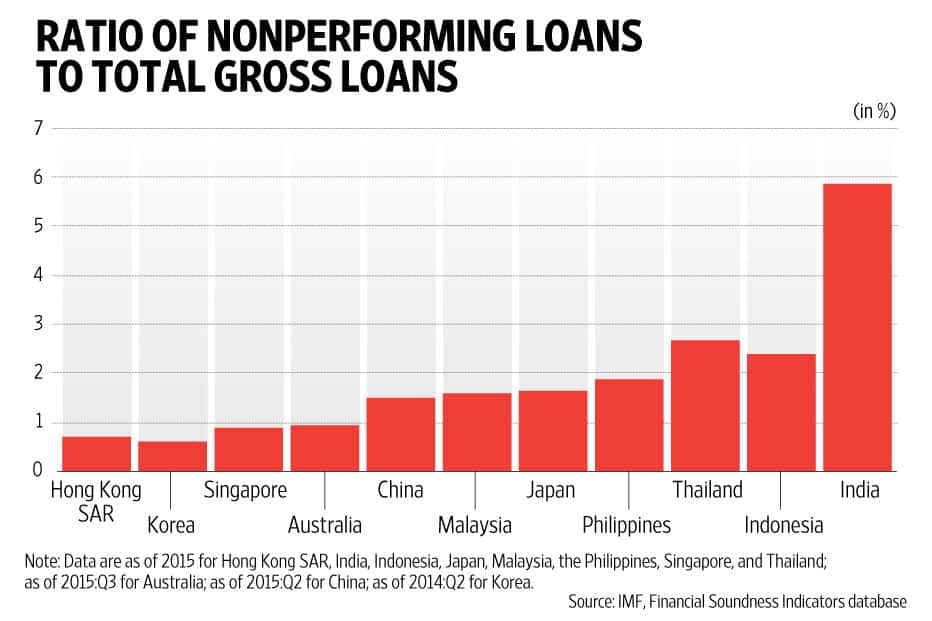 According to the data used by IMF, which is as of 2015, NPLs in India are just 6% of total loans. The IMF data does not appear to take restructured loans into account. There is no country in the region which even comes close. The second-highest level of NPLs is seen in Thailand (under 3%) followed by Indonesia (a little over 2%).

The divergence is only set to get worse.

As banks complete a clean-up of their balancesheets by March 2017, the reported level of stress in the banking sector is rising quite rapidly.

The latest data in this regard was put out by Reserve Bank of India deputy governor S.S. Mundra during a speech on 29 April.

Mundra highlighted that stressed assets (which include gross bad loans, restructured assets and written off accounts) for the banking system as a whole have risen to 14.5% as of December 2015, compared to 9.8% in March 2012. During the same period, the stressed assets for public sector banks spiked from 11% to 17.7%, said Mundra.