Thanks for Visiting Mint
You seem to have an Ad Blocker on. Please turn it off in order to continue, or whitelist Mint
HOW TO TURN OFF AD BLOCKER
OR
REFRESH IF YOU ALREADY TURNED OFF THE AD BLOCKER
Home >Market >Mark-to-market >Will Donald Trump really be able to deliver a fiscal stimulus?

Will Donald Trump really be able to deliver a fiscal stimulus?

The US equity markets have been making new highs since the election of Donald Trump as president. US bond yields have moved higher and the dollar has strengthened in the hope that Trump will provide a fiscal stimulus to the US economy, both through tax cuts and through spending much more on infrastructure. But the question is: can he really afford to provide a hefty fiscal stimulus? 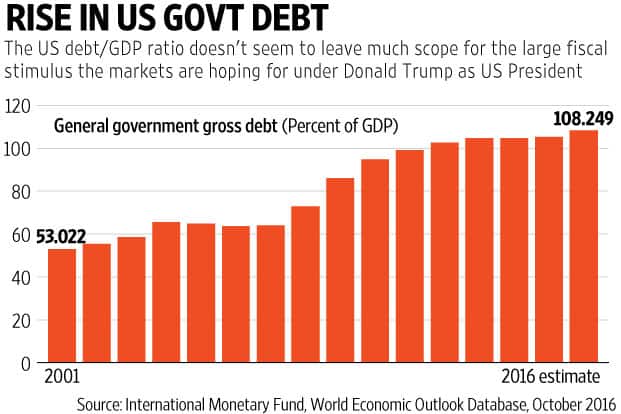 The chart shows US government gross debt as a percentage of Gross Domestic Product. It shows how US government debt has increased in recent years. The US debt/GDP ratio, already over 100, doesn’t seem to leave much scope for the large fiscal stimulus the markets are hoping for. That’s apart from the fact that several Republican politicians are fiscal hawks, not comfortable with large government deficits.

Global funds have been selling emerging market equities and taking funds back to the US in anticipation of the Trump stimulus to the economy coming through. But if Trump is unable to deliver on his promise of a large fiscal stimulus, it is likely that the trades made in the last couple of months will reverse, with funds flowing back into emerging markets