Home / Market / Mark-to-market /  If Trai abolishes IUC, regulatory risk for telcos will take a whole new meaning
Back
Share Via

The worry for investors is that if the courts don't intervene, perhaps on the ground that it is a regulatory matter, then there's no stopping Trai from taking extreme measures

Bharti Airtel Ltd and Idea Cellular Ltd’s shares have fallen around 7% from their highs in the past week. Of course, valuations had risen to a point where a large number of risks to the sector were being ignored.

But what has finally forced investors to wake up and smell the coffee are reports that the Telecom Regulatory Authority of India (Trai) is considering a complete phaseout of interconnection usage charges (IUC).

These reports have found fresh wings after the Delhi high court dismissed Vodafone India Ltd’s petition demanding that the regulator disclose its methodology for calculating IUC. The worry for investors is that if the courts don’t intervene, perhaps on the ground that it is a regulatory matter, then there’s no stopping Trai from taking extreme measures. 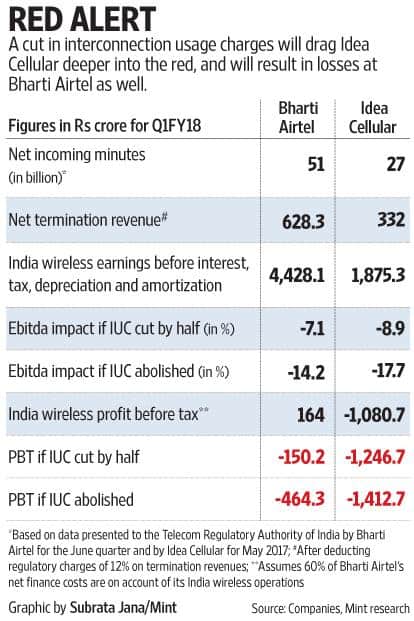 Earlier reports had suggested Trai may cut IUC by half, which was expected to impact Bharti Airtel and Idea Cellular’s wireless profits by 7% and 9%, respectively. A complete phaseout will mean double the impact.

But more importantly, as analysts at Kotak Institutional Equities point out, such a move will warrant a derating of the sector, as it raises question marks about incumbents’ ability to manage the regulatory side of the business. “(This) would be the second instance of incumbents being unable to get their (logical, to us) view on an important regulatory development accepted. The first instance was renewal of extant spectrum; the regulator’s decision to auction in-use spectrum made the renewal auctions a business continuity issue and led to hefty spectrum payouts. Each such regulatory decision chips away at any incumbency advantage in addition to worsening the overall economics of the business; managing the regulatory side of the equation is extremely important in highly regulated businesses like telecom," Kotak’s analysts wrote in a note to clients.

As pointed out in this paper earlier, about four-fifths of the people who spoke at Trai’s open house discussion on IUC were in favour of the “bill and keep" model being propagated by recent entrant Reliance Jio Infocomm Ltd. Under this model, companies recover costs associated with terminating a call from their own users, rather than charge competing networks for tapping into their networks with incoming calls.

Of course, incumbents weren’t absent from the debate. Sunil Mittal of Airtel, Kumar Mangalam Birla of Idea and Vodafone’s Vittorio Colao have all decried the possibility of the move to a “bill and keep" regime. But from the looks of it, even these high-profile statements have not had their intended effect.

To be sure, Trai hasn’t still officially stated its position on the matter; although the stream of new reports in recent days suggests it has made up its mind that continuing with IUC doesn’t make sense for too much longer.

As pointed in this column earlier, a cut in IUC will drag Idea deeper into the red, while it will also result in losses at Airtel’s wireless business. This was based on the assumption that IUC will be cut by half. If IUC is abolished, incumbents will find themselves in a bigger hole. This does not even take into account the possibility of further pricing pressure from Reliance Jio if IUC is indeed cut. Jio is expected to save around Rs25 per subscriber per month if IUC is cut by half, and Rs50 per month if it is abolished.

Jio can be expected to plough back some of these savings by subsidising its services further, resulting in a double whammy for incumbents. All said, the overall impact can be far higher than what is captured by the 7% drop in share prices in the past week.