Mumbai: India’s third largest lender by assets, HDFC Bank Ltd, reported a whopping 52% surge in its toxic loan pile for the quarter ended September and a 68% jump in provisions towards them.

Yet, the private bank reported a cool 20% growth in profits and an eye-popping 22% growth in loans when the rest of the industry is struggling to even reach mid-single digits. No wonder it is the most valued bank in the country. The stock did not trip up over the bad loan figure, especially when profitability metrics are enviable. Core income rose 22% and non-interest income also clocked a healthy 27% for the September quarter. 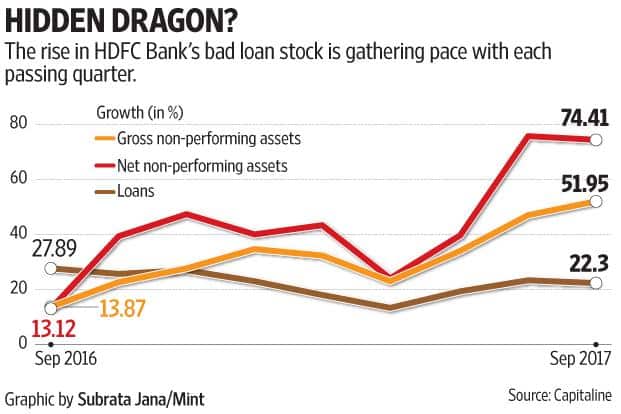 On its own, the jump in bad loan stock should unnerve investors. Add to that the fact that quarterly rise in bad loans has picked up pace sharply over the last one year.

HDFC Bank’s gross non-performing assets (NPAs) were rising at least 20% every quarter since December 2015 and this has risen to an average 30% in fiscal 2017. But for the first and the second quarters of the current fiscal, the surge is even bigger at 47% and 52% respectively.

Another uncomfortable fact is that its net NPAs have risen faster, indicating that provisions are not keeping pace. To be fair, its provision coverage ratio is 66%, higher than that of many banks. For the September quarter, the bank is in dialogue with regulator Reserve Bank of India (RBI) on classification of a project loan that was restructured earlier.

The stock has galloped 47% over the last one year, outstripping benchmark indices and even most of its peers. Context and relativity come to the rescue here. If we put the rising bad loan stock in the context of the loan book, asset quality looks pristine. Gross NPAs as a percentage of total loans is just 1.26% while net NPA is even lower at 0.4%. Compare this with peer performance and HDFC Bank’s stock begins to justify its valuations.

The secret sauce to keep bad loan metrics friendly is to simply grow the loan book at a fast clip. This does not mean indiscriminate lending but a smart acquisition of borrowers which HDFC Bank seems to have mastered. Its biggest advantage is that 70% of its corporate loan book has an average tenure of up to one year, keeping asset quality clean simply by frequent churning of the book.

The bank’s position as an investor favourite may be unassailable for the moment but investors would do well to keep a closer watch over the lender’s asset quality as well.