Mutual funds stock up on IT and NBFC scrips

HDFC was the top buy among large caps, with mutual funds stocking up 1,515.16 crore worth shares of the mortgage lender in May

Mumbai: Domestic mutual funds snapped up shares of technology and non-banking financial companies (NBFCs) in May, supporting the market in a month that saw the continued exit of foreign investors.

HDFC was the top buy among large caps, with mutual funds stocking up ₹ 1,515.16 crore worth shares of the mortgage lender in May. 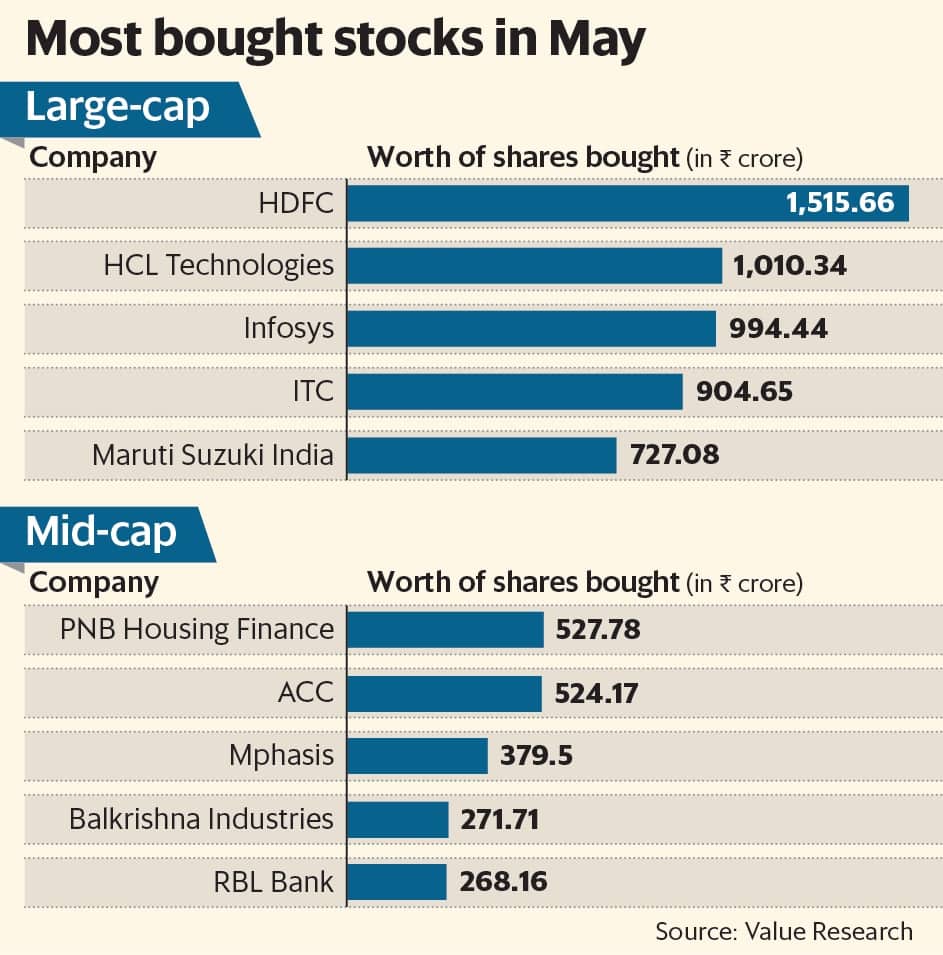 In May, as foreign institutional investors withdrew a net of $1.4 billion from Indian stock markets, mutual funds pumped in a net of ₹ 13,618.88 crore. Fund houses bought ₹ 1,010.34 crore worth of HCL Technologies shares, and ₹ 994.44 crore of Infosys shares in May, according to mutual fund analytics firm Value Research India Pvt. Ltd.

“People were underweight IT, because domestic story was the theme for least 12-15 months. Fundamentally, things have been good for IT stocks, and company-specific news have also been incrementally positive," said Jinesh Gopani, head of equities at Axis Asset Management Co. Ltd.

“A weaker rupee has also helped to counter the margin pressures they faced earlier, and hence, some positive movement is likely to reflect in the EPS (earnings per share) growth," added Gopani.

“There is absence of bad news at Infosys. The change of leadership is helping. Also, Infosys continues to be more attractive on the valuation front than rival TCS," said Dhirendra Kumar, CEO at Value Research.

Mutual funds booked some gains in TCS, which had gained 31% since the start of the year to April.

Micro-finance institutions and housing finance companies in mid-cap space were also top buys during the month.

“HDFC is an all-weather company, and also a holding company play," said Kumar.

Gopani explained that the government’s thrust on affordable housing was also making the pack attractive.

“Generally, there has been a lot of focus by the government on ‘housing for all’ schemes. Also, the pack had corrected, and the company has shown good numbers and promise of late. They become a good bet to deliver returns," said Gopani.

“The financialization of the economy is happening in a big way. The loan book and asset books are created by NBFCs and small banks in a big way, especially in the semi-urban and rural areas," said Gopani.