Why it is time for restructuring for Indian metal firms

Some of India’s major reforms in the 1990s were pushed through during difficult times for the economy. The metals sector is in a difficult position. China’s weak economy, falling metal prices, weak demand and ample supply, and high debt are major threats.

Investors have been dumping metal shares worldwide, with Glencore Plc getting special attention this week. On Monday, its share fell by 30% on fears of the likely impact of low metal prices. The stock has recovered since. The time is ripe for a change.

Alcoa Inc., the world’s third-largest aluminium producer, has decided to split into two. One will focus on making aluminium while the other will sell value-added products. A Reuters report mentions that nine out of Alcoa’s 15 smelters are unprofitable.

However, for the value-added business, the metal price is mostly a pass-through with some price lag present. What really matters for it is the processing margin. 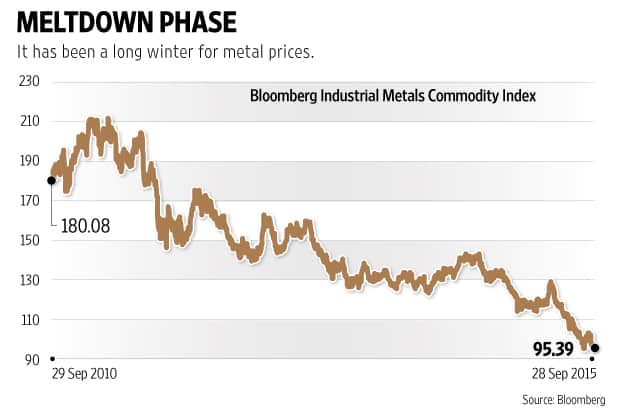 A demerger also lets shareholders decide which part they want to hold and the split is expected to see shareholders benefit. All this is on paper and may take a long time to show up.

Indian metal companies are in a similarly difficult position. They are fully exposed to the global commodity cycle. Falling prices have upset profitability while interest costs are increasing as new projects are being completed. They have asked for import barriers, but that is a short-term solution, even if it is effective. In the June quarter, sales rose by 10.5%, but interest costs rose by 15.5%. The current quarter may see it become worse.

A demerger is not an option for all. Also, this is a cyclical phenomenon. When commodity prices are high, basic products make handsome profits. Those with captive mines benefit more. But in a downcycle, these operations become a millstone. Then, the merchant miners appear less vulnerable. Of course, the current downturn is singeing everyone.

The time does seem right for the metals industry to restructure, as its problems don’t look short-term in nature. If not outright demergers, it could be disposing non-core investments, selling some parts of the business or even shutting loss-making units. However, there does not seem much urgency visible on the ground.

Maybe they are hoping for a miraculous recovery. Or possibly, the large debts on their books, mostly borrowed from Indian banks and institutions, gives them bargaining power. Restructuring loans is easier than operations, but it would be unfortunate. A government-led bailout would be a bad thing in the longer term.

Anyway, equity investors are not waiting around to find out how this ends. The S&P BSE Metal index is down by 42.6% in the past one year.