Why we stick with SIPs and not endowment plans

Most of you who read this column are now investing in the right way, using a systematic investment plan (SIP). But did you know that your dull, boring SIP is the result of more than 10 years of regulatory change? Most of you have also discarded the low-return endowment plans and now purchase a pure term plan to look after your life insurance needs. But did you know that you got to the right solution not because of regulatory change but despite it. I’ve been mapping the Indian personal finance industry for over 15 years and the behaviour of two regulators in industries that both manage household money has been fascinating. We now have the data to show the impact of regulatory change in the mutual fund and the life insurance industries on firms, sellers and households. I will relate the story through four tables.

Mutual funds have gone through a decade of regulatory action on costs and where they are placed. I find that the mutual fund industry made and sold products with the highest costs. Table 1 shows how the industry kept moving to launch fund types that allowed them to charge more from investors. Till 2006-07 all mutual funds could charge 6% of a new fund collection to investors which lead to churning of investor money. Mutual funds would go on launching new schemes, drum up a lot of advertising to get investor interest, pay distributors large commissions and get investors to buy. Nothing wrong with that except, in a few months, another new fund offer would do the same and agents would ‘churn’ investors from the old to the new scheme with a view to harvest the commissions. The Securities and Exchange Board of India (Sebi) banned the 6% NFO charges on open-ended funds initially. The industry began launching closed-end funds because they chould still charge the 6% on those funds. Sebi plugged that gap. But then the industry began to harvest the 2.25% front load (commission embedded in the price of the scheme) in the product. In 2009, Sebi banned upfront commissions totally. Mutual funds became a no-load product and sellers could now either get a trail commission or charge a fee. Mutual funds (some of them, not all) found a way out to compensate agents. They began launching series of closed-end funds and ‘upfronted’ the trail commissions for the next three or five years. The data shows the numbers of closed-end funds jumping clearly. By 2015, the ‘upfronting’ was capped at 1% of the investment. As a persistent regulator kept closing gaps, the industry began an extensive outreach and literacy programme, telling investors to use a systematic way to access equity markets. Table 2 shows the almost vertical rise in investor interest that looks unlinked to the state of the stock market, post the clean-up in the mutual fund industry. The SIP flows at over ₹ 4,000 crore a month by May 2017 show that this is sensible stock-market investing. Note that net assets turn positive and then are rising post-2014. This means that retail investors are holding their equity funds for a longer period of time, or that churning is less than before. Data is showing that both industry and investors have done well as the regulator has set sensible rules of the game. 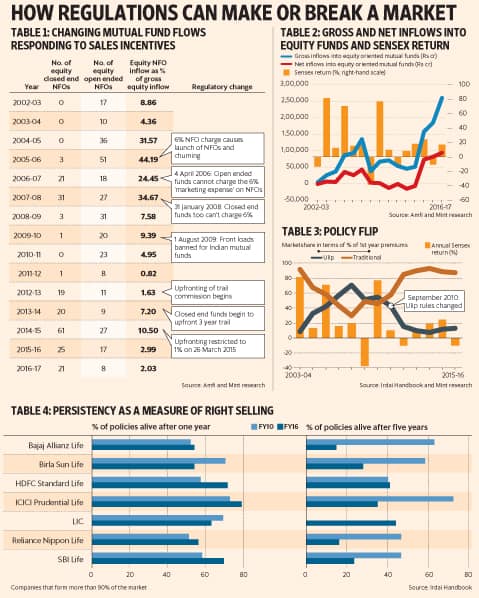 The life insurance industry saw a disruptive change in 2010 when the regulator introduced arbitrage within the industry. In 2010, the ministry of finance leaned on the insurance regulator to check the rampant mis-selling of unit-linked insurance plans (Ulips). Used to the guaranteed returns of traditional plans, investors were hit by a new product called Ulip that agents said would double their money in three years. The rising markets made the deal look good. Stories of sharp sales, fraud and fudged signatures on policy documents reached the ministry of finance, which then asked the regulator to clean up. The regulator did clean up, but just the Ulip product, leaving the traditional plan to continue with its high-cost and opaque product structure. Table 3 shows how the industry flipped the sales from Ulips to traditional insurance policies. The argument that investors burnt their hands in the market and therefore demanded traditional plans flies in the face of the insurance industry argument that very high upfront incentives are needed to sell life products because insurance is sold and not bought.

Did the regulatory change benefit investors? No, it did not, because the reform nudged the industry to move from a now transparent, lower cost and potentially higher return (Ulip) product to an opaque, higher-cost and poor return (traditional) one. One way to map investor behaviour in a long-term product is to look at persistency, or the number of policies that are funded in subsequent years. If a person is right-sold a push product, then she clearly knows that she needs to fund it for 15 to 20 years. Why would a person who is buying a long term product stop funding it after the first few premiums? You can argue that a few people may do this due to some circumstances, but for more than half the policies sold to die after the 5th year points to mis-selling. In the case of certain companies, more than 80% of the policies sold don’t survive five years. Did the persistency numbers improve post the 2010 regulatory change? Table 4 compares persistency numbers before and after the 2010 regulation change. The data clearly shows that persistency has fallen post the switch from Ulips to traditional plans after the 2010 regulatory change. I’ve chosen the firms that represent more than 90% of the market. Investors are being sold insurance due to the high (and increasing) incentives allowed by the regulator, but the industry is a leaking bucket – it is unable to retain money even for five years. This is not good for investors because they get very little of their money back if they exit traditional plans within the first few years.

Clearly regulatory change impacts firm and investor behaviour. There is now evidence to show that the capital market regulator reform has given us a better market but insurance regulator has caused more harm than good to retail investors in India.

Monika Halan works in the area of consumer protection in finance. She is consulting editor Mint and on the board of FPSB India. She can be reached at monika.h@livemint.com